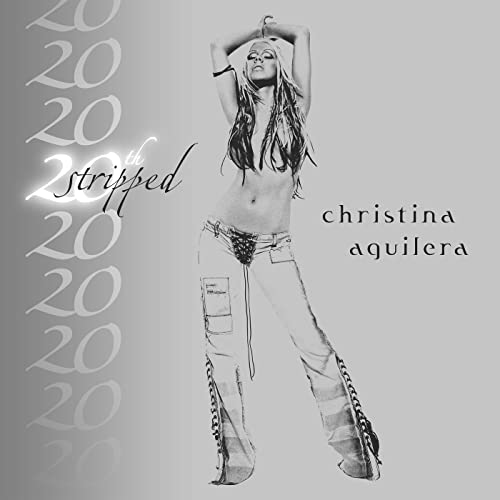 Even if you’re not an avid fan of mainstream pop music, (like myself until around about quite possible a couple of years ago- and even then, I’m still not a massive fan, just more appreciative of different music styles!); I reckon everyone (and I mean everyone!) would, and probably should, know about Christina Aguilera and her hit songs “Beautiful”, “Genie In A Bottle”, “What A Girl Wants” and “Reflection” from the 1998 movie Mulan. Or maybe you’ve heard Christina’s music from the 2010 movie Burlesque, or “Say Something”, her popular and respected collaboration with A Great Big World. whatever the case, I reckon what matters is that with 5 Grammy Awards, 1 Latin Grammy Award and a star on the Hollywood Walk Of Fame, as well as plenty of awards nominations and wins (Christina has been nominated for 451 awards, and has won 221 awards), Christina’s discography, filmography and calibre of her songs speaks for itself. A pop star through and through, with a powerful voice like Whitney Houston, Mariah Carey, Celine Dion, and Barbra Streisand; Christina’s influence and popularity and impact I reckon is largely dependent on her stirring and compelling voice. A pop star in her own right and influential to the core to many of us (see my extensive blog about Christina here!), Christina’s music hits your soul and tugs at your emotions right away.

When hearing her songs while blogging about her last year, I was almost sad- perhaps I could have appreciated her music more and loved her music more if I kept up with her career in real time rather than in retrospect. But this lamentation only made my resolve and determination stronger- to listen to any and every Christina Aguilera song and album moving forward. Christina’s vocals are out of this world in a crazily good way, and her power as a singer, songwriter and performer is probably unparalleled in the modern era, and on the same level as the artists aforementioned- Whitney Mariah, Celine, and Barbra. And thus, when I heard of Christina releasing a 20th anniversary edition album of her 2002 project Stripped, I jumped at the chance to review this project. For the uninitiated, this press release tells you all you need to know about the re-release. It’s two extra songs plus a brand-new album cover, and while that may not be that ground-breaking or revolutionary; the project still is a good reminder to revisit the albums of the past and be immersed in the projects of yesteryear. Artists like Avril Lavigne, Third Day, Amy Grant, Robbie Williams, Paul Baloche, Sheryl Crow, Shania Twain, and Phillips Craig & Dean, have all unveiled ‘deluxe’ or ‘anniversary edition’ or ‘greatest hits- but with a twist’ albums this year- and now here we are with Christina, who has done the same. Lovers of Christina’s music will most probably recognise every song from Stripped inside and out… so this ‘review’ won’t be a review per se. You can read all about Stripped on Wikipedia, and also about Christina and my favourite songs from Stripped in my blog from last year. Songs like “Beautiful”, “Fighter”, “Walk Away”, “I’m OK”, “Keep On Singing My Song” and “The Voice Within” are all emotive and powerful- as I’ve outlined in my blog; but if you want to read more about Christina and how this album flows, then I guess google ‘stripped 20th anniversary edition Christina Aguilera review’? Or read Christina’s thoughts of her biggest songs on Rolling Stone? “I Will Be”, a b-side from “Dirrty”, is a stripped back piano led ballad about being strong on your own- an empowerment type of song similar to “Beautiful”, with Christina relaying that ‘…I will be strong on my own, I will see through the rain, I will find my way, I will keep on traveling this road, ’til I finally reach my dream, til I’m living and I’m breathing my destiny…’; while the remix of “Beautiful” brings the iconic and pop culture smash into this decade- in the best way possible.

With Christina Aguilera’s prowess as a singer and as a songwriter only improving more and more with each new day and each new song; Christina’s legacy and status as one of the artists of this generation; is assumed, with the evidence of hit songs and moving and inspiring melodies proof of this fact as well. With Christina writing about a wide variety of lyrical subjects throughout her career, she has shown that she isn’t a one trick pony. With a number of songs being honest, emotional, real and authentic; there’s so many layers to her music- and I’d expect Christina Aguilera to be recording for a long, long, long while yet. The evidence is also clear on this timeless re-release, that Christina still impresses even after all this time. With the ‘new’ song of “I Will Be” being lyric-wise one of the strongest material Christina has recorded since her Stripped (no pun intended!); could we hope for a new studio album from Christina soon? After all, her previous project was in 2018… So well done Christina, for being brave and showing us the journey that you’ve been on and are still on- and let us hope and pray that whatever comes next inspires and challenges just this project has! How about a Christmas album or a live CD/DVD or an acoustic album? Or a covers album?

‘Stripped’ was such a special breakthrough album for me. I went into it with the perspective of ‘I don’t care if it sells one or 1 million copies. I need to do this for me, and be able to express how I feel, so I can be my best and my happiest’. And I was able to do that … not without much controversy, but par for the course — I’ve never been one to shy away from that! Just being able to come from a place that was really genuine to me … that was a labor of love for me. [and now], Other artists come up to me and tell me which songs have inspired them. It’s a beautiful, beautiful thing to see come full circle. And that album was such an important time for me, and … the beginning of being the artist that I became.

In the last 20 years, since ‘Stripped’ was first released, social media has transformed our relationship with our bodies, and in turn, our mental health. Research suggests that time spent on social networking sites is associated with body image issues, self-harm and disordered eating in children and teens. This needs to change.

We are Beautiful, no matter what they say. A message I will always stand by and a message I prioritize to instill in my own children through every chapter of their lives! Today, it’s harder than ever to hear our own voice amongst so many others infiltrating our feeds and minds with mixed messaging… ultimately leading us to tune-out our own truth and self-worth. The original ‘’Beautiful” video set out to bring awareness and a sense of compassion in the face of judgment, criticism, and outside opinions.  It still carries an important message to remember our core values outside of what’s being fed to us…to find a sense of balance and accepting ourselves for who we are.

6 songs to listen to: Beautiful, Fighter, Walk Away, Keep On Singing My Song, The Voice Within, I Will Be