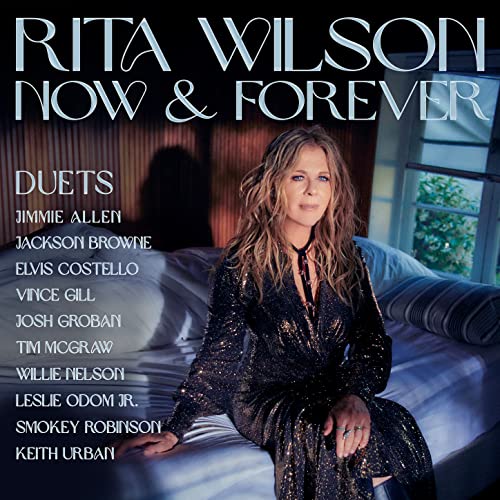 Everyone knows Rita Wilson in a sense that they know Tom Hanks the actor, and then by association, they would know of Rita, because she’s been Tom’s wife for the better part of 30+ years. That’s how I knew her. Never mind that she was (and still is) a stellar actress and an accomplished leading lady in her own right, Rita has been in the business of show business for quite some time. While I may not really know the types of roles she has taken over the years (one click at Wikipedia and you can see that Rita has been in movies like Jingle All the Way, Raise Your Voice, Old Dogs, The Art of Getting By and Larry Crowne, and TV shows like Girls, The Good Wife, Frasier, Happy Days, MASH and Midnight Caller), what I do know is this- that Rita’s time within the realms of the spotlight are far from over. Just over 10 years ago, Rita embarked upon something that is now thought to be one of Rita’s crowning decision that she’s undertaken- AM/FM released 10 years ago, and ever since that first album release, Rita’s pivoted and shifted her career and focus, from an accomplished actress to a new music artist.

Unveiled in 2012, Rita has since released a further 3 more full-length albums (and a ton of other standalone singles over the years), to create somewhat of a name for herself as she delivered within the realms of pop and country, with such determination, dedication, and drive, as we see someone that, in other circumstances, would’ve been ‘written off’ for starting a music career later in life; thrive and really feel at home as a music artist. Rita currently has 5 full-length albums to her name (her previous four, plus her most recent album Now & Forever: Duets), and while personally, I haven’t heard much, if any, of her songs whatsoever, what I do understand is gumption and grit, especially if your back is ‘against the wall’ and odds are against you. Rita’s path to being a successful music artist may seem unconventional (what successful country artist would start making albums well into their fifties?), but it somehow worked. Rita’s music albums speak for themselves, her most recent album (unveiled in September 2022) included. While I may not be well versed in songs from the 60s, 70s or 80s as I would like, what’s special about these melodies, are that these 10 songs were created as a means and method of her revisiting her past, exploring songs that made her fall in love with music for the first time. It’s a special album for Rita, and a must-listen if you appreciate a lot of 60s, 70 or even 80s music, love some of Rita’s music previously, or both.

Standing at 10 tracks, Now & Forever: Duets ventures deep into the archives of Rita’s own history, songs that have been special for her because of the fact, that these songs made her fall in love with music all those years ago. And while she didn’t pursue music from the get-go, she has now since acknowledged the impact and influence music has had on her life, even if she didn’t go into music as a career, straight away. Music can have an impact on someone, even if they don’t go the way of creating music as a career- Rita went the way of music through the avenue of being an actress. Some others may not go into show business, full-stop. That doesn’t make music impact these people any less. Rita’s just a unique case in point, considering that she’s probably one of very few music artists who started in music, later on during life. Maybe there’s this stigma and a taboo nature, about talking about people who have shifted or pivoted careers and are now starting in another career when they’re _____ years old. People look at other people differently- weirdly, maybe even in a judgemental way, when they understand that this person started off in their field not too long ago, and they’re 50 something or even 60 something. It’s unfortunate about stigmas, taboo topics, and the like; but it happens. And I’m sure, Rita Wilson is no exception. Nevertheless, I’m sure that 5 albums to her music career, ought to quell and dispel such stigmas about older people starting off in different career fields and paths, right?

This is not really a review of the album, per se. If a review is what you’re looking for, check out google, because this ‘review’ won’t necessarily be your in-depth discussion on these songs within this album. Because in some form or another, we’ve heard these tracks before. These are songs of yesteryear, and even I, who hasn’t necessarily been a ‘fan’ of the 1970s music, still know a thing or two about some songs here on this album. ‘I’ll Be There’, from The Jackson 5, is recorded here by Rita and singer-songwriter Jimmie Allen (and for me, is one of my personal highlights on this album), while ‘Massachusetts’, a song by the Bee Gees, is also given the Rita Wilson treatment, with duet partner Leslie Odom Jr. ‘Crazy Love’, a song that I heard back in the day when Michael Buble covered it for his 2013 album, is present on this album too, this time slowed down, and covered by both Rita and country superstar Keith Urban. Then there’s ‘Songbird’, album-ender and the first unveiling of this new project, released earlier on during the year with Rita and Josh Groban at the helm with this duet. While I myself haven’t heard the original, I have heard this Josh Groban cover, numerous times. You see, what makes this album unique, is the nostalgia that this album brings along with it- and the fact that a lot of these tracks aren’t necessarily the most ‘flash’ or well-known, as we’re reminded that oftentimes, the songs that mean the most to people in the long run, are just that- good songs. They won’t necessarily be your chart-toppers or even the popular ones. Good songs are good songs, regardless of that. Rita’s selection of 10 tracks are a reminder, that it can be any song that pierces your heart and make you appreciate ____ or fall in love with _____. It doesn’t have to be a chart-topper to do so. What it does require is a willing heart to receive and accept what is being given to us, and to be open to the encouragements and the lessons learnt through song that spark our soul, along the way.

To be perfectly honest, Rita’s music isn’t necessarily the songs (or even the style of it) that I’ll be actively clicking on, anytime soon. But at least I can appreciate the styles delivered at that time in history; and see the impact it has had not the music of today. Sure, I may not be as fond of the current pop music landscape, but maybe, I feel as though I don’t connect as much to 1970s music either. Maybe my sweet spot is somewhere between 1980s – 2000s/early 2010s music, if you were to boil it all down. Don’t get me wrong. I do love me some of the latest CCM music, that’s for sure. But if I were to gravitate to a certain decade (or decades) on my own, I guess I’d go to the 1980s all up to the 2000s. That may or may not change in the future, but where it stands now, is this. Rita’s music however is slowly allowing me to appreciate music that is considered way before my time. An album that is very personal to Rita on a ‘songs impacting my soul’ level; Now & Forever: The Duets is evidence, that there’s songs in anyone’s life, that really hit hard for you, songs that have shaped your childhood, and songs that have probably made you fall in love with music, even before you knew you could. Maybe, just maybe, this album can allow us to look deep within ourselves to see which songs in history do the same for us. For me, it’s songs like Carman’s ‘R.I.O.T.’, Delirious?’s ‘History Maker’, Chris Tomlin’s ‘How Great is Our God’, Steven Curtis Chapman’s ‘Lord of the Dance’, Tim Hughes’ ‘Here I Am to Worship’, Third Day’s ‘King of Glory’ and Rebecca St. James’s ‘You Are Loved’. What are yours? Well done Rita for such a compelling and challenging album. Looking forward to see how the Lord uses these songs for our good and His glory, in the upcoming weeks and months ahead.

3 songs to listen to: Songbird, I’ll Be There, Massachusetts