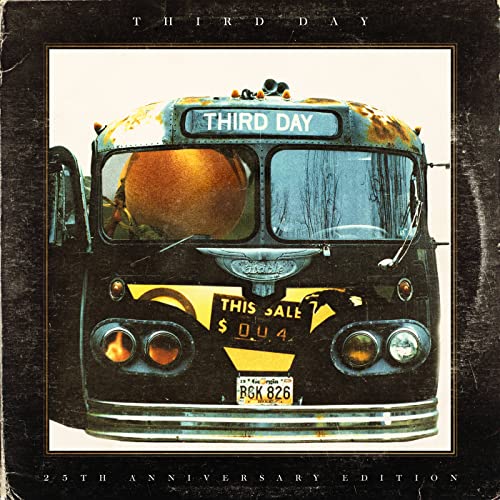 Third Day are indeed living legends. Though they are not currently active within the CCM community, when they did have their heyday (from 1992 – 2018), their music was good. Powerful. Emotive. Heartfelt. Everything that you would want from a CCM band at that point in time and history. While ex-frontman Mac Powell is still undertaking music as a career (see the site’s review of New Creation), I personally still think that the band still has relevance, merit, and heart, even now, around 4 years removed from whence they unveiled their last live show in 2018. For me my favourite album of theirs would always be either between 2005’s Wherever You Are and 2001’s Come Together, though their 2010 album Move and 2008’s Revelation also come close. While the band splitting up as actually a semi-shock when the announcement was made four years ago, what still remains is this- that Third Day the band is by far one of CCM’s most impactful and influential band’s over the last 20 years or so, alongside other bands like MercyMe, Newsboys, Castings (all three are still currently active now), not to mention other legacy bands like Audio Adrenaline, Jars of Clay and Delirious?, to name a few. While it’s been four years since the parting of Mac Powell and co.; it’s been a whopping 25 (26 to be precise) years since the band’s self-titled debut first album unveiled in 1996- and so in October 2022, Provident Label Group have since re-released the band’s debut album with 25 tracks- 12 from their original release, and an extra 13, full of live recordings and new re-mastered mixes to create a full, poignant, and compelling debut album experience. A must-have for any Third Day fan enthusiast/collector, Third Day: 25th Anniversary Edition is a great reminder, that Third Day’s music is for any time and any decade, and the songs that wowed us all the way back in 1996, can still make an impact in 2022.

There’s nothing much to be said about this album release that hasn’t been said already over the years. One glance down the track list and you know why Third Day’s debut album is so iconic. Songs like ‘Consuming Fire’, ‘Love Song’, ‘Forever’, ‘Nothin’ At All’, ‘Thief’, ‘Blackbird’, ‘Take My Life’ and ‘Praise Song’ are not only standout songs from the debut album, but are also standout CCM songs throughout the 1990s decade, period. In fact, ‘Thief’ the song, is by far one of the rawest and most honest portrayals of the thief on the cross on the side of Jesus in the gospels, and such a depiction like Third Day’s, ought to be met with commendation and praise. ‘Thief’ may only need to rival Steven Curtis Chapman’s ‘How Love Wins’ (from the stellar album Music Inspired By The Story) with regards to which song tells the most complete story of how the thief on the cross may have felt at that moment in time (and beforehand) when he uttered the words to Jesus ‘remember me when you’re in your kingdom’. Both ‘Thief’ and ‘How Love Wins’ capture the emotion with such unparalleled and unbridled poignancy, and yet, Third Day’s track gets the edge, musically and lyrically…but only just. Then there’s songs like ‘Consuming Fire’ (a powerful rock anthem that embodies the 1990s, through and through), ‘Take My Life’ and ‘Praise Song’ (the beginnings of the band also becoming a premier worship band as well, with the albums Offerings I and Offerings II to follow suit), ‘Nothing At All’ and ‘Forever’ (classic Third Day songs that really put this band on the map), not to mention ‘Love Song’ (a reflective song I first heard on Offerings I) and ‘Blackbird’ (no, not The Beatles’s version, but still equally epic and profound); and you literally have an album that has tremendous replay value after all these years.

So, there you have it. Third Day: 25th Anniversary Edition. Third Day’s first album, and an album that is a great standout CCM 1990s album, period. Full stop. Mac and co. revolutionised rock music within and around the CCM genre, and Third Day’s debut album played a tremendous part in that. ‘Consuming Fire’ and ‘Thief’ are timeless songs, even today. Maybe in a couple of years, they’ll be a 20th edition re-release of Third Day’s mainstream-esque album Wire? Maybe. Perhaps. Hopefully. Regardless, this band that, in my opinion, retired way too soon, is still impacting listeners and fans around the world, even now (myself included). This is just one good way to remind listeners of the legacy of this group. Maybe other retired bands need to follow suit and re-release their past albums with special perks. Maybe soon we can get a 25th Anniversary edition of Delirious?’s King Of Fools (in my opinion, the crowning achievement, by any CCM artist/band, in the 1990s, period)? Well done Mac and co. for such a prolific and timeless release. Maybe re-releases for Conspiracy No. 5 or Time next?