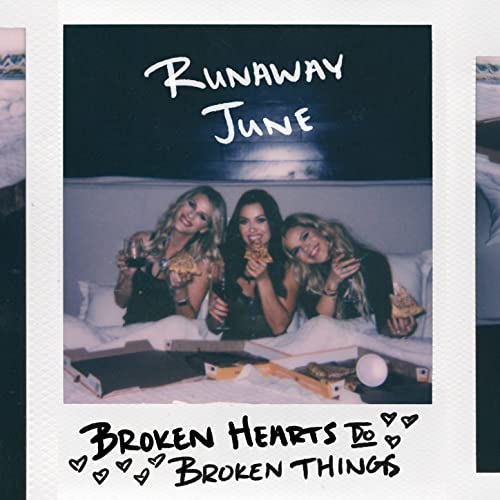 Runaway June has been a band that has been up-and-coming for a few years, and it’s only been in 2020 when I was actively exploring the country music genre (through artists like Carrie Underwood, Lady A, Little Big Town, Keith Urban, Martina McBride and Shania Twain, to name a few), that I came across this country-pop trio. Runaway June reminds me of artists like Little Big Town, Point of Grace, even The McClymonts and The Chicks (f.k.a. the Dixie Chicks), and so as I started listening to this very unique and underrated band, I was to be reminded of a few things. One- that God works in ways that we don’t even know how, showing us varying musical styles and allowing us to enjoy a vast plethora of music, for our enjoyment but also for Him to speak to us in ways that we can only deem to be God-ordained. And two- hearing Runaway June over the last few years has been a great thing, as I’m reminded of uplifting songs like ‘We Were Rich’ and ‘Buy My Own Drinks’; and encouraged of this notion of individuality as well as being thankful for the life we have led, no matter how rosy or dark it can seem, because in everything we experience, we are shaped, moulded and formed into the people we are today. While I still haven’t gotten myself across all of the trio’s songs to date, what I have heard was enough that I was excited with anticipation when the band released their debut Christmas EP (on October 16th, 2020). I even reviewed the 5 song EP in December 2020, while in August 2021, I reviewed the band’s 3 song EP titled Backstory. Now, a further year and two months on (from when I reviewed Backstory), the trio have once again gifted us all with new music to listen to- a new single titled ‘Broken Hearts (Do Broken Things)’.

Let me just preface this, by saying that it’s hard to bounce back from a lead singer change, mid-way through a band’s career. Though there are some success stories (Genesis, in all their facets and iterations, Newsboys, Hawk Nelson, Audio Adrenaline, to some extent, Van Halen, Journey, Foreigner), it’s tough and difficult to survive a lead singer change. Usually, the band either dissipates and disbands after a lead singer change, because, like it or not, the lead singer makes the band (more than 50% of the time). Alas, Runaway June are one such band where the jury’s still out on whether a lead singer change would affect the band long-term. With Naomi Cooke leaving the band only recently (I think either late last year or even early this year), Stevie Woodward has some big shoes to fill. Nevertheless, if their new song ‘Broken Hearts (Do Broken Things)’ is any indication, then Runaway June still have some life in them, as the trio are still as jovial, enthusiastic, heartfelt, and passionate as ever.

Penned by Mandi Sagal, Sarah Lake, and Steve Fee (yes, that same Steve Fee who was a CCM artist back in the day), ‘Broken Hearts’ flips the script on the feelings felt by people who have experienced post-breakup blues, as we see a song that can be inclusive of a lot of people who have experienced heartbreak over the years. As lead singer Stevie reminds us, ‘…we all know that feeling of getting your heart broken and going out and doing some questionable things, so we wanted to make ‘Broken Hearts’ feel as supportive and inclusive as possible…’ As Jennifer Wayne adds and continues, ‘…instead of making it just about one person’s experience, it’s all three of us singing to you and letting everyone know we’re all in this together. It’s our way of telling people, ‘We all screw up sometimes, but it’s okay because you’re gonna get through it and come out the other side.’ I think there’s a real beauty in that…’ The song is their way of reminding us, of the reasons behind why we do silly and stupid things post-breakup (whether you’re a girl or a guy, people do stupid things across the board when it comes to post-breakups, period). When you’re in a post-breakup, your heart is still tender and, in some cases, broken. And our hearts being in such broken or fragile states…well that leads us to be prone towards dumb decisions, right? Mind you, that mindset can lead to us not taking responsibility for our own actions because ‘our hearts are just broken, so just cut us some slack and give us some grace’; but nevertheless, ‘Broken Hearts’ does give us some reasons behind why people do the silly things they do when they’ve broken up with someone.

Runaway June is a great up-and-coming band, that is one to look out for the remainder of 2021, and into 2022, not just in the country music scene, but in all music, period. This is a trio that harkens back to similar music artists of years past, from The McClymonts, Lady A and Little Big Town, to Point of Grace, and The Chicks, even other newer artists like Lauren Alaina and Lindsay Ell remind me of who this trio sounds like. And that is all a very good thing, being likened to these artists. And maybe, sometimes it’s hard to judge a band’s sound on just this one new song. Maybe we ought to wait a little for a full-length Stevie Woodward-led EP (or an album) before we cast judgement, right? Well done, Stevie, Natalie & Jennifer, for this enjoyable new song. Here’s to the new era of music that this song gives rise to!