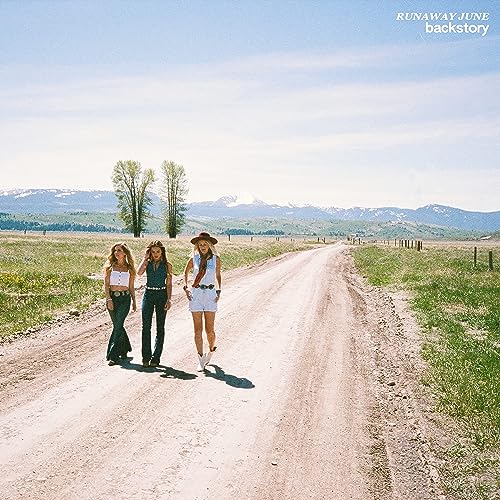 This is It Inc. / Wheelhouse Records

Runaway June has been a band that has been up-and-coming for a few years, and it’s only been in 2020 when I was actively exploring the country music genre (through artists like Carrie Underwood, Lady A, Little Big Town, Keith Urban, Martina McBride and Shania Twain, to name a few), that I came across this country-pop trio of Naomi Cooke, Jennifer Wayne, and Natalie Stovall. Runaway June reminds me of artists like Little Big Town, Point of Grace, even The McClymonts and The Chicks (f.k.a. the Dixie Chicks), and so as I started listening to this very unique and underrated band, I was to be reminded of a few things. One- that God works in ways that we don’t even know how, showing us varying musical styles and allowing us to enjoy a vast plethora of music, for our enjoyment but also for Him to speak to us in ways that we can only deem to be God-ordained. And two- hearing Runaway June this last year has been a great thing, as I’m reminded of uplifting songs like ‘We Were Rich’ and ‘Buy My Own Drinks’; and encouraged of this notion of individuality as well as being thankful for the life we have led, no matter how rosy or dark it can seem, because in everything we experience, we are shaped, moulded and formed into the people we are today. While I still haven’t gotten myself across all of the trio’s songs to date, what I have heard was enough that I was excited with anticipation when the band released their debut Christmas EP (on October 16th, 2020). I even reviewed the 5 song EP in December last year, and now a further 8 months into my journey listening to this underrated trio, I’m once again quietly exciting for their new offering of music- Backstory.

With the EP running short and sweet at three songs, it’s a tad short in terms of the # of tracks on the EP, but the lack thereof of songs is made up for, with the energetic nature these three ladies exuberate in these songs, and throughout all their whole music career in general. The three songs deliver the heartfelt message of heartbreak, break-ups, moving on, and becoming better for it, as Naomi Cooke, Natalie Stovall and Jennifer Wayne start to quickly become one of the most underrated groups in country music in quite some time. First track ‘Forgot About That’ starts off with steel guitar and a good southern beat as Naomi belts out the emotive words of how a persona seems to forget all of the wrong things their ex is doing, as soon as the ex comes into the same vicinity and proximity of the persona. It is a reminder that more often than not, breakups are messy. You want to move on, but sometimes, you can’t just negate all the good experiences you’ve had with the other person. Nor can you give them a hall-pass as soon as they try to get back into your good graces again- because whatever they did contributed to the reason of said breakup in the first place. And thus ‘Forgot About That’ was born, a song that tries to acknowledge the very difficult thing about moving on from someone you care about, coupled with the fact that within the same presence of this person, you can fall back to where you once were before. ‘Down The Middle’ is a heavy emotional song about the aftermath of a messy breakup, stating that sometimes what can seem like an easy clean break to someone in a relationship, can really seem to be detrimental to another. People respond to breakups in different ways, and ‘In the Middle’ challenges us to think about someone else’s feelings before breakups happen, because hearts are fragile things, and they in fact don’t break down the middle, they most likely shatter into a million pieces unless handed with care and concern. The EP then ends with ‘T-Shirt’, an up-tempo foot-stomping BOP, that tries to see the brighter side of breakups (in the song’s case, the bright side is getting the T-shirt from your ex, and not wanting to return it, because it’s sweet revenge to keep something of theirs). Yes, breakups are messy, but at some point, people can hopefully find good things that come out of difficult situations. ‘T-Shirt’ can hopefully dispel some despondency when it comes to initial breakup aftermath, and remind us all, that indeed, something good can come from something not that pleasant. It may not be a T-shirt, but it will be a lesson learned- about your ex, yourself, your family, friends, even something you could learn about God Himself through the whole process.

Runaway June is a great up-and-coming band, that is one to look out for the remainder of 2021, and into 2022, not just in the country music scene, but in all music, period. This is a trio that harkens back to similar music artists of years past, from The McClymonts, Lady A and Little Big Town, to Point of Grace, and The Chicks, even other newer artists like Lauren Alaina and Lindsay Ell remind me of who this trio sounds like. And that is all a very good thing, being likened to these artists. And maybe, sometimes it’s hard to judge a band’s sound on a handful of songs- three to be precise.  For maybe, just maybe, check out their first album Blue Roses at least once, and if you’re like me, be excited for a full-length follow-up to the 2019 album, whenever that may be. Well done, Naomi, Natalie, and Jennifer for this enjoyable, albeit short, EP. Here’s to the new era of music that these songs of backstory are to give rise to!