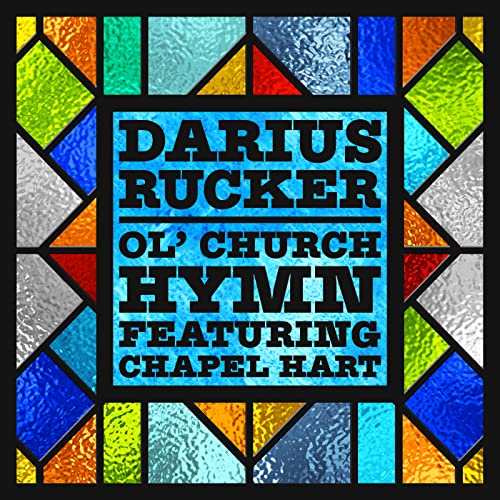 Darius Rucker, a veteran of country music, has been around for a long, long time. Originally the frontman for rock band Hootie & The Blowfish way back in the 1990’s (and he still is!), Darius forged his own solo career in the 2000’s- this time as a country artist. At the time, Darius wasn’t an artist that I instantly gravitated towards. Even now, his style of country music isn’t that engaging as other artists that I have been impacted by over the years. I dunno, there’s just something about Darius that screams ‘blah’. Nothing against him, but his music doesn’t connect with me all that well on a soul level. It’s possible that I have some sort of preconceived ideas about Darius’s music, and maybe I need to revisit his music just to shed some of those assumptions. But as it stands, particularly as I have listened to Darius’s song “Times Like This”; there’s something that just doesn’t gel with Darius Rucker. However, that all changes right now. “Ol’ Church Hymn”, a country/gospel/hymn-like single that features country group Chapel Hart on guest vocals, released not too long ago. And it has definitely piqued my attention and quite possibly changed my opinion on Darius’s music moving forward. A quasi-worship song that has me worshipping Jesus, Darius’s new song doesn’t reinvent the wheel on worship music or country music. But it is inspiring, powerful, incredibly hopeful and revitalising. Chapel Hart are an exciting and vibrant new up-and-coming band, and their inclusion on Darius’s new song only enhances it all the more.

Darius: You have to hear their voices on this song. Like so many people, I was blown away when I saw Chapel Hart’s original response to ‘Jolene’. I was recording ‘Ol’ Church Hymn’ at the time and instantly had this vision of it becoming a duet once I heard their voices. I’m so thankful they said yes to singing on it with me, and I can’t wait to see the huge career they’re going to have.

Chapel Hart’s Devynn Hart: He really took a chance on us. He saw some of our stuff online and he was like ‘I love what you ladies are doing. I have an idea and I want to hear you guys on this song.’

A melody that however doesn’t hold a candle to iconic worship songs like “10,000 Reasons”, “In Christ Alone”, “Living Hope” and “Here I Am To Worship”; Darius Rucker’s “Ol’ Church Hymn” is nonetheless engaging and inspiring- more akin to Josh Groban’s “River” in theme. And as vague as the song is (one could think that Darius is comparing his relationship with his partner to his relationship with God… or Darius could even be singing about God Himself!); “Ol’ Church Hymn” is different and will create healthy discussion between all kinds of people. A song that isn’t musically creative, but thematically quite unique, Darius has done a super job, and Chapel Hart and brilliant as well. I don’t know if I will actively listen to Darius’s albums going forward or even going backwards. But that’s hardly the point. A good song is a good song is a good song, no matter who is singing it. Well done Darius and Chapel Hart. What are you waiting for everyone? Want some praise and worship? Look no further than “Ol’ Church Hymn”!