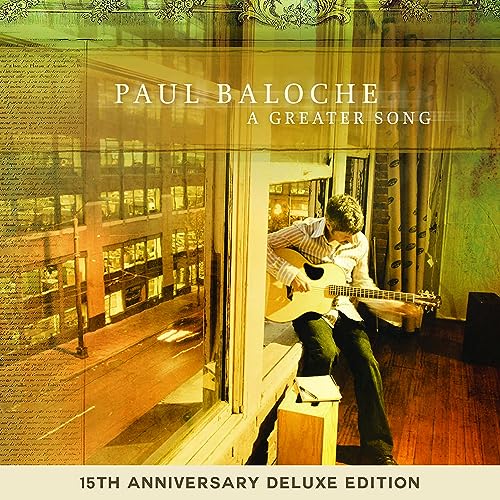 Paul Baloche shouldn’t really need any introduction. Full stop. Frankly, I’m not really going to give an introduction to this ‘review’, because if you haven’t really heard Paul Baloche and his songs, chances are you’ve probably sung any one of his famous songs at church over the years- songs like ‘Our God Saves’, ‘Above All’, ‘Offering’, ‘Arise’, ‘Praise Adonai’, ‘Glorious’, ‘Today is the Day’, ‘Shout for Joy’, ‘A New Hallelujah’ and more recently ‘The Same Love’, ‘Oh Our Lord’ and ‘King of Heaven’. Paul has been one of my favourite worship leaders and artists, period (up there with Tim Hughes, Matt Redman, Lincoln Brewster, Meredith Andrews, and Chris Tomlin) so when I heard there was a 15th Anniversary re-release of A Greater Song, re-recorded as well as alternate studio renditions of already-enjoyable live hits, I was excited and intrigued…how can you actually top an already well-rounded album, arguably one of my favourite Paul Baloche albums ever?

And so, I heard the album whence it released, and let me tell you…anyone who has been a fan of A Greater Song from 2006, or a fan of Paul’s music (or even worship music in general), will thoroughly enjoy this album. The live 2022 versions of the songs are slightly different to their 2006 counterparts- a few tweaks in the instrumentations, making the 2022 album a tad musically different to the 2006 album so as to create intrigue and interest in the 2022 re-release…if only to be listened to once. The musical differences are miniscule, but big enough for the listener to notice some difference in the instruments. Nevertheless, Paul’s ‘new’ album is full of standout hits- ‘Hosanna’, ‘Your Name’, ‘What Can I Do’, ‘A Greater Song’, ‘I Will Boast’ and ‘Because of Your Love’ are the cornerstone songs on the album, lyrically, musically, and thematically, as it is these six songs alone that make A Greater Song (the 2006 or the 2022 album) worth it to purchase. The 6 added reimagined studio renditions of ‘A Greater Song’, ‘Your Name’, ‘You Have Been Good to Me’, ‘Because Of Your Love’, ‘Hosanna’ and ‘What Can I Do’ continue to make this re-release a must have for any fan of worship…the studio renditions are just as good, maybe even slightly better, than their live counterparts.

If you have A Greater Song, then this re-release is still worth it. If you have Paul’s previous music, then this album is also a must have. Basically, if you love worship music, then this album is for you. Never mind that it’s 15 years old. In fact, the album essentially being from 2006 is actually a good thing. Because in listening this this re-release album, I’m reminded that sometimes music of yesteryear can still impact and influence even now, especially when people assumedly think that old albums don’t really have a place in the new world and climate we’re in. Paul Baloche’s album is definitely one for the ages- songs like ‘Hosanna’, ‘What Can I Do’ and ‘Your Name’ still hold up now in 2022 as much as they did when the album was released all those years ago. Well done Paul for this timeless and classic worship album. Maybe another album can be re-mastered and reimagined in the future…2009’s Glorious perhaps?

6 songs to listen to: Hosanna, What Can I Do, Because of Your Love, A Greater Song, I Will Boast, Your Name