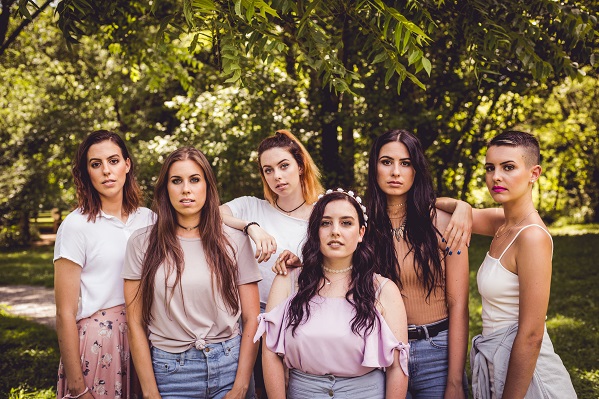 Welcome to the latest instalment of our most recent blog series Top Tens. Last time, we unveiled our top fifteen inspirational U2 songs (in honour of U2’s new album The Joshua Tree (Super Deluxe) releasing this a few weeks ago- which we will review soon!). This time, in the same vein of the U2 post and the Peter Hollens post before that, let me introduce you to another new-ish favourite group of mine- Cimorelli, and post a few videos (from now and a few years earlier!) so that you guys can all experience the awesomeness of the inspiring group of six sisters.

Now, before you all be nit-picky, let me say that Cimorelli isn’t really a new band. They’ve been around since 2008. Consisting of 6 sisters (Christina, Katherine, Lisa, Amy, Lauren and Dani), and with the girls currently between 16 – 26 years old, the girls have released 6 EP’s, 1 mixtape and 2 full length albums. So it’s quite a long career thus far. But the reason I call them new-ish is that I only discovered the girls and their inspiring music last year. Actually late last year. I was browsing Jesus Freak Hideout, looking for new music news, on one of my days off, and I saw the news post/press release of Cimorelli releasing their new album Alive on JFH. Naturally I was intrigued, so I explored a bit on the band’s website, youtube channel, social media etc, and things went from there. As a site, we acquired the pre-release of Alive in December last year, reviewed the album (you can read it here) and interviewed the group (of which Katherine answered email interview questions which you can read here).

Since then we’ve (my brother and I) listened to quite a lot of songs from Cimorelli’s discography. So since Alive officially released in May this year (the album dropped last year in December via PledgeMusic), and the girls continue to post cover videos every week (of which their last video- a cover of a Spice Girls song- was recommended to me the other day by Youtube while I was listening to a Hillsong UNITED song for review purposes!); I thought it would be fitting that we combine Throwback Tuesdays and Top Tens, so that I could reveal the awesomeness that is Cimorelli, if you guys haven’t had the pleasure of hearing their music.

So here, in no particular order, are 20 original and cover videos that have resonated with me over the past few months. Some videos are thought-provoking, poignant and inspiring, and others are just plain fun and silly (with no meaning whatsoever!). Some videos are about Jesus (although except for some tracks in Alive, the tracks are mostly directed to the mainstream!) and some are about relationships (of which I included some because of the fact that they’re somewhat inspiring, and even though I am single right now, these songs remind me that when I am married in the future, to treat my wife like how God treats his children- with unconditional love). Yet all of these 20 songs, while musically and lyrically different, showcase the girls singing beautifully in harmony, and if any song from Alive is an indication of the band’s future, they’ll be around for a long time yet!

1. One More Night (from Alive)

6. Worth The Fight (from Up At Night)

7. Wings (from Made In America EP and Believe It EP)

10. Scars To Your Beautiful (acapella cover, originally by Alessia Cara)

14. Shake It Off (cover, originally by Taylor Swift)

Which song is your favourite? Which cover do you hope Cimorelli records next? Do you think the sisters should carry on with singing songs about Jesus (as they did in Alive) or should they go back to singing about relationships? Let us know in the comments below!