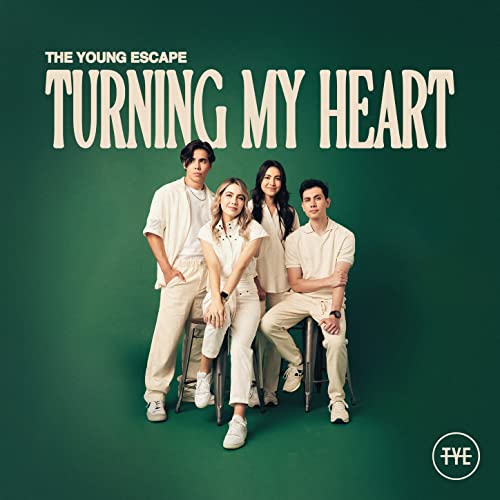 The Young Escape have had a choppy music career of sorts. Since signing to Capitol CMG in 2017 and releasing their chart-topping radio single “Good Life”, we assumed that there would be a full-length album releasing at some point. Singles like “Neverfade”, “Love Me Like You”, “So Alive”, “Count on Me”, “It’s Gonna Get Better” [not reviewed!], and “Broken Is Beautiful” all followed on from “Good Life”, and while no full-length album surfaced from all these years, the band nevertheless still put on a high-energy show (from all the hand-held camera clips I’ve seen on youtube), and their music has always had a sense of urgency and purpose. Mckenna, Ryan Krysten and Luke Johns make up this all-sibling band, and quite possibly one of the most up-and-coming and breakout CCM bands I’ve heard, even though their debut single released 5 years ago. I’m still hoping and praying for a debut full-length album whenever it comes, but as of right now, I need to take what I can get. And right now, it’s the group’s BEC Recordings debut single “Turning My Heart”, a song that released a few days ago.

As far as melodies go, the song itself doesn’t really invent the wheel. There’s other pop/CCM artists out there that are continually putting out great music, artists like Francesca Battistelli, TobyMac, Building 429, Mike Donehey, Natalie Grant, Jordan Feliz, for KING & COUNTRY and MercyMe. While I’d love to place this sibling band in this list, I’d have to say that the band themselves haven’t released enough music material to even have that conversation. The band has always shown glimpses of brilliance with every single release they’ve unveiled, but without a full-length album, unfortunately they’ll forever be remembered as ‘the single band’…which at times, I’ve found myself calling them, as well. Not by intention of course. But to be honest, I kinda forgot that The Young Escape were even a band, until their 2021 release of “Count on Me”. Now here we are just over a year later, and the Johns siblings are at it again- another single. While I’m really, really hoping that they would make an album at some point, I’m just happy that they’re still making music. The song itself speaks volumes about how songs can inspire you and how some songs are the soundtrack to people’s journey through life and their journey through faith as well.

Similar in theme to “I Need A Miracle” (Third Day), “There’s A Song For Everything” (Maren Morris), “Ladies In The 90’s” (Lauren Alaina) and “What’s Your Country Song” (Thomas Rhett); The Young Escape on this track name drop a lot of CCM songs from the 90’s and the 2000’s (namely, songs from TobyMac, Switchfoot, Matt Redman, MercyMe, Michael W. Smith, dcTalk and City On A Hill). For those who didn’t grow up in CCM, this song wouldn’t mean much. but for myself (and presumably others) who literally lived and breathed this type of music, “Turning My Heart” is extremely sentimental and nostalgic. It’s not a superb or lyrically brilliant song by any means. But it does have replay value, as lead singer Mckenna sings about God’s goodness and faithfulness and speaks about the importance of CCM music in her own life- this is essentially a testimony-type track as Mckenna highlights certain songs that helped her to who she is today. And with The Young Escape thus unveiling a track that pays tribute and homage to their past, “Turning My Heart” speaks about how God uses anything- including music from the past- to draw us all closer to him, through the turning of our hearts towards him; little by little and day by day. There’s nothing much more that I can say about “Turning My Heart” or any of their other singles. Except you need to hear these songs now. The perfect tracks to get you dancing (with also a positive message!), and think about the deeper things in life, The Young Escape are a band that I expect to hear more from in the coming months and years. So, what are you waiting for? Check out the band and let me know what you think of this new bouncy and joyful single! Well done McKenna and the rest of the band- maybe a full-length album in the future? Who knows?

Our new single, “Turning My Heart” is OUT NOW! This song is a huge part of our story. It’s a tribute to the way God has used Christian music, artists, and songs to lead us closer to Him. From the time we were kids, God has used music to build and deepen our faith. We pray this song encourages you and it would mean the world if you’d share it with your friends! Shoutout to the artists mentioned in this song – God used so many of your songs to inspire us when we were growing up!