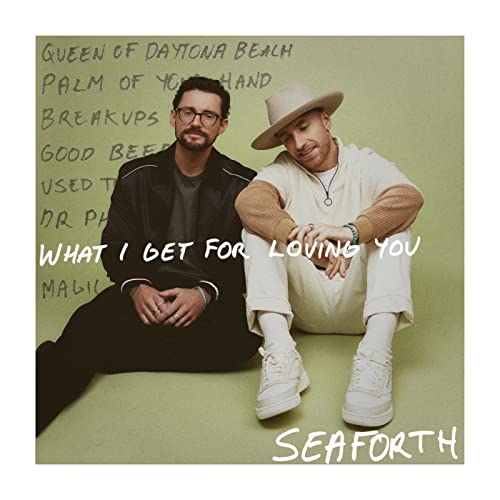 Seaforth– What I Get For Loving You (Amazon mp3/iTunes)

There are so, so, so many album/EP releases these days, in so many genres. Country, CCM, worship, pop, rock, rap, metal, opera, jazz, big-band, orchestral, instrumental, and the list goes on and on and on. How do you find an album/release worthy of your time to listen to? Well… I’d like to say I have the answer and the formula, but for me, it’s a swing and a miss. I look on Wikipedia (list of 2022 albums), on the iTunes pre-order page on my phone, as well as the pages on Genius, NewReleaseToday and JesusFreakHideout, to name a few. Also, I check out my Release Radar on Spotify every week for new music… but even then, there’s too much music and too little time to explore it all. Sometimes it is hit and miss… but there are days when you stumble upon someone special. This, my friends, is now, as I have had the pleasured of listening to Aussie country duo Seaforth. Now I don’t know much about them- not even one iota except for the interview quotes I’m including in this review below; but one listen to their EP What I Get For Loving You, and I was arguably impressed at their craft. This super catchy pop/country EP is incredibly fresh and revitalising, and lyrically the duo sing about some pretty relatable and relevant issues. This EP may not be everyone’s preference, but you all should listen to the EP at least once. You will find at least a song that resonates with you, I guarantee it.

Sometimes it does but I feel like that’s when you have to take a second, look back on things and ask each other ‘What did we just do? How cool was that?’ This has been what we’ve wanted to do for forever and if you only ever focus on the next thing coming along you can’t enjoy your achievements.

We were meant to be on tour over here with Chris Young right now (Chris cancelled his Long Road festival headline slot and UK tour 2 days before it was due to start), which was obviously devastating so not everything always works out the way you were expecting it too but we’ve managed to sort out some solutions and some extra shows. We’re here at this beautiful festival today which is so cool….

We’ve both been through the ringer in different ways, even going back to us originally being booked to play the C2C festival in 2020 and it being cancelled because of the pandemic at the last minute, I actually did go to therapy because of that because it would have been a huge moment in our careers.

We’ve had a lot of ups and downs over the years but we’ve supported each other through it all and learned to lean on each other through the good and bad times. We’ve had an amazing year this year and with the new music coming out it feels like our career is going on the right trajectory right now.

Opening with “Queen Of Daytona Beach”, the song delves into the concept of realising that everyone else in the world may be smitten with a girl, but you’re the lucky one because you get to be in a relationship with her. The song speaks about comparison and the world wanting what they don’t and can’t have; while the concept of learning to be content with what you have right now is also explored. On the surface, “Queen Of Daytona Beach” is like a party song similar to something that Keith Urban would record. But this track does have lyrical substance if you sit with it and search the song and not take it at face value as much. “Palm Of Your Hand” admittedly has less of a ‘deep meaning’ here, but the powerful and compelling track speaks about a guy falling for a girl who is our of his league while at a bar. With the melody to me being about confidence and carrying yourself with surety and with that atmosphere of being cool and calm and collected; we are all encouraged to step out of our comfort zone and do something that scares us and pushes our boundaries- even if it is as simple as talking to people we wouldn’t normally talk to.

The rest of the project speaks about a myriad of issues pertinent to today. The acoustic guitar led ballad “Breakups” speaks about the breakup of a romantic relationship or even a platonic friendship. And as the duo compellingly sing about the persona’s immediate inability to let go of the relationship because of the fact that they still like/love this person; we are also reminded that breakups take time, and that though you could still be friends on some level with that person, it won’t ever be the same- and that’s ok. The seemingly superficial pop melody “Good Beer”, with Jordan David on guest vocals, speaks about drinking cold beer with your friends to relax, though the song could also highlight the need as a human race to detox from work every once in a while, and to take time out to relax, reflect, recharge, and reconnect with the people you love and care about. “Used To It”, a romantic love song and an EP standout, is where the persona recounts how he’ll never get used to being in a relationship with his partner, and highlights the fact that we all should strive to be in relationships like that one in the song- relationships that we want to be in and that we know we’ll thrive and succeed in as us and our partner grow together in the same direction.

“Dr. Phil” follows, and is an emotional rage against the person who wronged or hurt us, as the duo sing about being alone in your feelings and emotions and being your own ‘Dr. Phil’- self-medicating until you numb the pain of whatever it is that is holding you back- a practice that I myself don’t advocate… and I’m sure the song is a warning as well. The penultimate track “What I Get For Loving You” (the title track), is a reflective, contemplative, ballad that is kind of defeatist and pretty fatalistic, as the duo sing about a breakup the persona had with someone and the ‘lot’ the person has ‘in their life’ to be bound to love this person who can’t and won’t love them back- it’s a song that speaks to the core of who we are as humans and the fact that we can’t switch off feelings like a switch immediately after a break up, because sometimes we’ll forever love that person even if they don’t. A sad song to the core, What I Get For Loving You ends with “Magic”, a piano ballad where the persona has seemingly moved on from the failed relationship, and admires this other person who makes them feel like magic and like royalty.

Before we met him, we had always loved Jordan’s music and always said to ourselves that he would be a great tour partner for us. We got that offer one day and that was incredible. The shows with him were great, right at that post-pandemic time where we needed to play shows again but no-one knew what it was going to be like.

We had ‘Good Beer’ recorded without him, it was done and we were going to put it out and then we decided that we needed someone better than me to record the vocals……

We wrote that song [Queen Of Daytona Beach] with our buddy Rocky in the middle of the pandemic. It was kinda the first song we wrote after the disappointment of the cancelled C2C festival in London in 2020. We didn’t do anything for months as the whole world shut down and ‘Queen of Daytona Beach’ was the first song we wrote when we started it up all again. We had that reference to ‘beautiful girls’ in the verse and we thought we’d need to change it up because Sean Kingston might sue us or something; but the more we listened to it, the more we got attached to it.

One day we just said, ‘Wouldn’t it be crazy if we could get Sean to feature in the song?’ We got in touch with his team, sent him over the song and it just kept moving forward!

I still don’t know much about Seaforth. I have conflicting feelings about this EP because it’s technically good, and individually these songs resonate incredibly, to me and quite probably to the wider world. But most of the songs here are a bit of a ‘downer’ (musically and thematically)- and so, perhaps you need to be in a certain frame of mind for listening to this EP? A collection of songs that are sad but also encourage us to be more intentional about our relationships and to cultivate them much more actively; Seaforth has thrown down the gauntlet and the challenge for us all to start living life to the fullest and to start living like every day is special and precious. For that reason, these guys deserve the praise. How about for the next release- something more upbeat on the whole, don’t you reckon? Well done guys for compelling and inspiring melodies that speak to our soul! If you haven’t listened to this EP, then you need to. Enough said.

3 songs to listen to: Breakups, Used To It, What I Get For Loving You