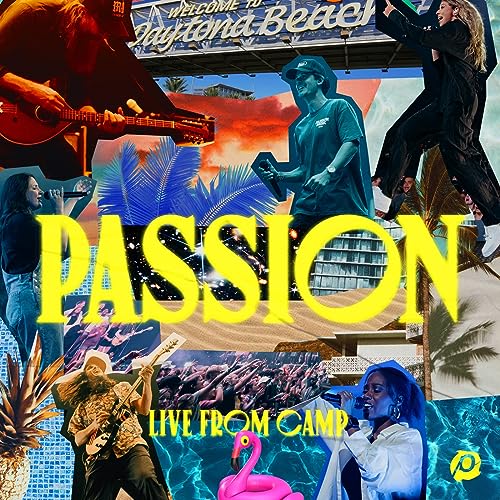 Earlier on in the year, I reviewed Passion’s album Burn Bright, and I concluded that I had Passion fatigue. “Another year, another Passion album”, was what I thought with a reluctant and exasperated tone; and right now, ‘another Passion album every year’ is probably one of the only things you can count on in life aside from death and taxes. Don’t’ get me wrong. Passion was great in its heyday in the 2000’s. In the past, Chris Tomlin, Matt Redman, Charlie Hall, and Christy Nockels were a part of this massive global worship movement (and now they’re not for some unknown reason!), and now the group is helmed by Kristian Stanfill, Brett Younker, Sean Curran (formerly of Bellarive) and Melodie Malone, with special guest appearances from Crowder. Their mission has always remained the same. While you can read about all things Passion in all of the articles here; let me give you all a quick refresher of what the group is all about- and mind you this is quoted verbatim from my Whole Heart review from 2018…simply because I’ve conveyed my thoughts most cohesively there, and there’s no reason to repeat myself!

Passion Conferences are held every year, and mostly comprise of many Sixsteps Records artists and others, inclusive of artists like Chris Tomlin, Matt Redman, Christy Nockels, Kristian Stanfill, Crowder, Melodie Malone, Brett Younker and Jimi Cravity to name a few. Every year these men and women of God come together to worship God in January and February every year at key and prominent U.S. cities, with the conferences directed at university students, and every year they invite guests as well. Over the years, Carrie Underwood, Lecrae, Tedashii, Hillsong UNITED, Rend Collective and Tenth Avenue North have all performed at what is still one of today’s prestigious yearly Christian events. With the annual event launched in 1997 by Louie Giglio, now one of the key pastors of the conference each year, the band now performs in conferences in Atlanta Georgia around New Year for their recording of their annual albums released in March, and these guys tour around the world as well! With the movement keeping their heart for students and their related ministry rooted in Isaiah 26:8; I have always loved the annual Passion albums.

In 2018, Whole Heart released- and though I say this every year, I truly believed that Passion’s album from 2018 was as good as any they’ve ever recorded (even without the presence of the ‘old guard’ of Passion!), with songs like “God You’re So Good”, “Ever Almighty”, “Almighty God”, “Hallelujah Our God Reigns”, “Ghost” and “All My Hope” all being some of my favourite Passion songs I’ve heard in a very long time (although nothing can really top the 2017 album Worthy Of Your Name). And while Follow You Anywhere released in January 2019 and overall wasn’t as compelling nor engaging as previous Passion albums; and Roar was unveiled in March 2020 (of which you can view my thoughts here!); 2021 saw only a double single released in January, and no album. These guys rectified that with the release of Burn Bright earlier this year (although Jon revealed his harsh thoughts about Passion in his reviews of the studio EP’s Burn Bright and Live From Rehearsals earlier this year, in kind of like a lamentation, sorrowful, emotional way, kind of like the end of an era of him listening to Passion– and I agree with him by the way. Yet though I have fond memories about Passion in the mid-2000’s; it still pains me to say that Passion isn’t like it once was, and I doubt I will be listening that religiously to the group moving forward. Live From Camp released this past week… and sad to say, it’s just there.

There’s this reality that I think I’ve come to understand through Burn Bright and this EP. And it is this. That Passion could conceivably go on and on and on and release countless albums to the point where each one afterwards sounds the same as the one before it. Yet in my own opinion; there has to be some unique features present in each release to keep all of us still interested. For me after listening to Live From Camp though (yes, I’ve given Passion one more chance!), the undoubted answer after numerous listens is the same as earlier in the year. That there is musically nothing much here that is different from previous Passion albums, and I am still having Passion fatigue at the moment! Maybe I’m longing for the Passion of old, with Chris Tomlin, Matt Redman, and Christy Nockels! And though I’m sure each of the worship leaders of Kristian, Brett, Sean, Melodie, Chidima, and special guests Cody, Kari, Brooke, and Maverick City Music (and others), are all passionate (no pun intended!) and are all on fire for Jesus; unfortunately, nothing much in this EP keeps me excited and intrigued. I’ve mentioned in a previous review I think; that there could be a point where I am completely bored with Passion. Not necessarily the Passion of old, but the Passion of now. That time, sad to say, is confirmed to be today. I decided to give them one last try… but now, I think I’ve heard enough. There certainly is enough here in these 5 songs, to keep me shaking my head at the clichés of some of the worshipful moments here, and apart from a couple of songs led by Crowder and Sean Curran; nothing much really grabs me at all. Passion though is going to be around for a long time- and as long as the worship movement is in existence; I’m still somewhat quietly confident of the group’s future because I know they have done and can do better.

But how about the songs? I’ve spoken about the fact that this EP hasn’t grabbed me in the way that I’ve wanted it to, but if we dig a bit deeper, are the individual songs, as well as the vibe and atmosphere of the entire album, lacking? Or is it more to do with the song order? EP opener “Prodigals”, brilliantly led by Sean Curran, is one of the lone bright spots on the project, as Sean powerfully and emphatically sings about the parable of the prodigal son, and about the fact that Jesus always welcomes us home, even when we feel like we’ve strayed so far. A melody that is one of the strongest that Passion has recorded in a while; Sean ardently and fervently relays that ‘…this is the sound of a child coming home, hallelujah, this is the song of a welcome prodigal, hallelujah, I thought I was too far gone, but You always leave the light on, praise God, praise God, praise God, I’m coming home…’, as we are presented with a song of gratitude and one of thanks- acknowledging that we can come to God no matter what we’ve done.

“Christ Our King” follows; and is led by newcomer Rachel Halbach. It’s a radio friendly piano ballad, and a track that seems to be something that Planetshakers or Hillsong Worship would record. It’s a powerful and moving song, but unfortunately an equally forgettable song- with the lyrical content of praising God and lifting Him up on high being a concept that has been sung many times before: see “We Want To See Jesus Lifted High” by Noel Richards, “Be Lifted High” by Bethel Music and “Be Lifted High” by Elevation Worship. “Yesterday, Today and Forever”, a ‘standard’ CCM worship sogn led by Kristian Stanfill, is a melody that is nice, but is also a melody that is… there (songs like “Yesterday Today And Forever” by Vicky Beeching, “Same God” by Hannah Kerr, and “My God Is Still The Same” by Sanctus Real are all much more poignant, engaging and inspiring!); while the energetic, jovial and passionate “Higher Power” from Crowder (previously released as a studio version on Milk & Honey) lifts this EP to another level. Live From Camp then ends with the moving and exquisite “I Speak Jesus”, led by Chidima; but this rendition is way too long (7 minutes? Really?), and I actually prefer Newsboys’ version infinitely more!

Here’s the general consensus of what I’ve concluded. Simply put- Live From Camp by Passion isn’t exciting enough. Passion isn’t exciting anymore; and that’s the truth. Back in the day, when Chris Tomlin, Matt Redman, Christy Nockels and Charlie Hall were part of the movement, the releases were inspiring, powerful, and moving. Each of the songs were singles and representatives from the solo studio albums of the lead vocalists. Now, with Passion becoming more like Hillsong, Planetshakers, Bethel Music, Jesus Culture, and others; I firmly believe that now there’s little distinguishing each of these movements. You don’t see a Kristian Stanfill solo album, nor a solo album from Brett Younker or Melodie Malone. Sure, Passion is still good. It’s still inspiring. But no more is it unique and Live From Camp, like Burn Bright, makes me sad. White Flag, Take It All, Here For You, and Let The Future Begin were the golden years of Passion, as well as the mid-late 2000’s; and unfortunately moving forward I may have to revisit that era more so than Passion at the moment.

Passion’s heart is still the same- to bring glory to God in whatever setting they’re in, and to spread the gospel in whatever way they can. In that sense, as I am reminded that this is a movement that does what works for them, and will continue to give God the glory for however long God continues to put the calling on Louie and Shelly Giglio (after all, Passion is Louie’s brain-child and what God called and is still calling for him to do and be a part of!); I can sort of give this EP a tad more leeway than I have previously- as their ministry is to fellow believers. Yet beyond this year, something needs to be done to shake up Passion. Studio recordings, re-recordings of old classics with different vocalists, an acoustic album, a ‘mainstream’ album of worshipful songs… just something different. Because if we have the same old annual live CD; how will that attract new listeners? Something to think about as I leave you with the album to listen to. Is Live From Camp one of your favourite EP’s from 2022? Why or why not?

3 songs to listen to: Prodigals, Higher Power, I Speak Jesus