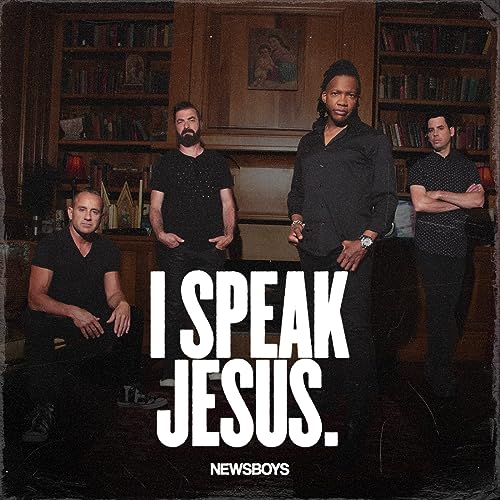 One of the most inspiring, honest, vulnerable, comforting, moving, and inspiring artists I’ve heard throughout the almost 33 years I have been alive, is the Aussie CCM band Newsboys. Comprising of Michael Tait, Jeff Frankenstein, Jody Davis, and Duncan Phillips; this 30 + year old band originated in the Sunshine Coast of Queensland. My brother Jon wrote a blog about the group a few years ago, that you can read about here, as well as his most recent reviews on the band’s 2021 album STAND from last year, and their 2019 album UNITED, which reunited long-time members Phil Joel and Peter Furler for a season- for the highly popular Newsboys United tour as well! One of the bands that I was listening to back in 2006 until now- it was this band amongst others that helped me expand my musical horizons beyond just Carman and Delirious?. Not that those aforementioned artists were bad in any way (check out blogs about Carman and Delirious? here and here!); but when you look at Newsboys and their impact the humble Aussie band have had on the CCM industry as a whole (read our blog about Newsboys here!)… how could you not be enamoured and impacted by their music? Songs like “Breakfast”, “Shine”, “He Reigns”, “Love Liberty Disco”, “It Is You”, “Million Pieces”, “Entertaining Angels”, “In Wonder”, “Wherever We Go”, “In The Hands Of God”, “Born Again”, “God’s Not Dead”, “We Believe”, “Guilty”, “Crazy”, “I’m Not Ashamed”, “You Are My King (Amazing Love)”, “Step Up To The Microphone”, “Stay Strong”, “Glorious”, “Lord (I Don’t Know)”, “Thrive”, “Devotion”, “Presence (My Heart’s Desire)”, “I Am Free”, “That Home” and “Live With Abandon” have all impacted my life, and most likely the lives of many people in the whole world.

Even with Michael Tait replacing Peter Furler as lead vocals back in 2009… listeners and critics have embraced Michael and welcomed this transition of lead vocals with open arms. The result is a group that has been around for over 30 years, who has presented the word of God in their songs many, many times, and a band who is unashamed of the gospel, and whose mission is to draw people closer to Jesus, regardless of how popular that may be or look like to the modern mainstream, and at times now accepted world at large. In 2019, the group released their most ambitious project in probably CCM history. UNITED featured the return of Phil Joel and Peter Furler- and you can read all about the album and our thoughts here. If you’re fascinated about Newsboys and their history, you can read their Wikipedia… but since a few weeks ago is when Newsboys have released their brand new single “I Speak Jesus”… well it’s time to let you all know my thoughts of this song, and give you all my two cents’ worth, don’t you think?

Newsboys are set to unveil their deluxe edition of STAND in about a week. You can read the press release here; but “I Speak Jesus”, the Here Be Lions/Darlene Zschech cover, isn’t present on this upcoming project. Does this mean that it’s a lead single to a completely new album to be released at a later date? Or is this song a stand-alone single? Regardless, this powerful, worshipful melody is incredibly encouraging and inspiring; and Michael’s voice is as vulnerable, honest, emotional, and pristine as ever. Lyrically, this melody brings life, hope and vitality, a certain refreshing and invigorating feeling; and Newsboys have taken this melody into CCM radio and done so brilliantly. As Michael authoritatively and convincingly declares that ‘…Your Name is power, Your Name is healing, Your Name is life, break every stronghold, shine through the shadows, burn like the fire, shout Jesus from the mountains, Jesus in the street, Jesus in the darkness over every enemy, Jesus for my family, I speak the Holy Name ‘Jesus’…’, we are met with a worship melody that places the importance of Jesus’ name above every other thing in this life. Worshipping Jesus and declaring His name over everything is something that is important to do. But though this song on its own is incredibly powerful, we mustn’t fall into the trap of ‘declaring Jesus’ over some areas in our life where we know He wouldn’t approve of- kind of like ‘using’ Jesus’ name as a rubber stamp to do something contrary to what the Bible says is beneficial for us. But speaking Jesus’ name into certain situations where it is edifying to our soul… well, I’d say that is what the song is about and what the song is championing.

What more can I say about “I Speak Jesus” the song, that I haven’t mentioned already? Personally, I reckon this song is beautifully crafted and brilliantly sung- and Michael once again is vocally at the top of his game. This song reminds me of the God’s Not Dead era- probably one of my favourite Michael Tait eras; and if you’re not a fan of Michael Tait as lead singer and prefer Peter Furler instead, then perhaps this melody probably won’t resonate with you. But I’d say check it out anyway, as you never know if it’ll be your new favourite worship cover or not. As the overall encompassing theme of Newsboys’ latest full-length project is one that is being convicted and passionate to stand for Christ in everything that we do; we are reminded by this fact and are encouraged to be more active in our faith. With Newsboys preparing for a deluxe edition of Stand to release in September this year; let us remember to always stand for truth, even if it isn’t popular and the hip thing to do. Well done guys for your take on a melody that though musically and lyrically simple, is one that undoubtedly will bring us more into the atmosphere and spirit of worshipping Jesus for who He is. I can’t wait to hear what God has in store for you next in the future!