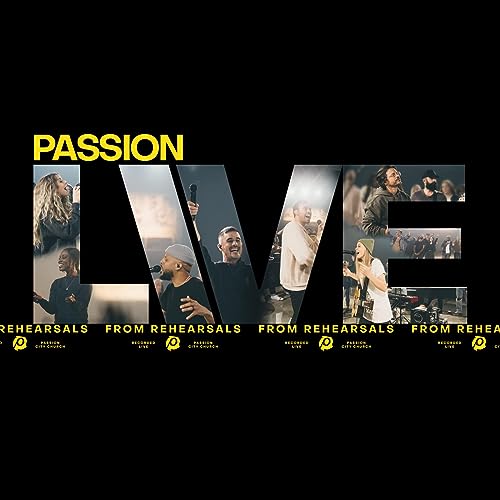 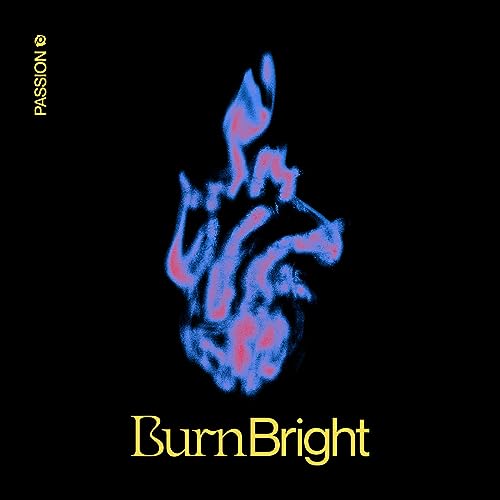 Passion, the band (or should I call it a worship movement, or even a global initiative headed by pastors Louie and Shelly Giglio?) has been around for ages, quite literally. Being a movement that has been a phenomenon since its inception in the late 1990s, as founder Louie and Shelly Giglio became pastors of one of the most influential global worship movements that anchor its message of hope and worship within the sphere of influence of young people; Passion and their music ministry has been focused on reaching a lot of younger people, from high school to university students across the world. Annually, more than 50,000 18–25-year-olds from a variety of countries and across the states of America, trek towards various domes and stadiums in America for the annual Passion conference. Three days and nights of teaching and learning; of worship and encouragement, Passion has always been about bringing together young people as they declare the name of God, hear renowned speakers like Louie Giglio, Christine Caine, Beth Moore, Francis Chan, and John Piper, and just generally be inspired through song, sermon and being around fellow young people going through similar circumstances and issues. With the Passion worship arm within this movement comprising of many sixsteps Records artists from Chris Tomlin, Kristian Stanfill, Crowder, and Brett Younker, to Melodie Malone, Christy Nockels, Matt Redman, and Charlie Hall; the three days in January are full of worship led by these aforementioned artists, alongside a few surprising guests (over the years they have comprised of Colton Dixon, Kari Jobe, Carrie Underwood, Lecrae and Hillsong UNITED to name a few).

So, we fast forward to 2022. We as a site have reviewed plenty of Passion albums over the years- see the collective link of the reviews here; and so we have been blessed to listen to a variety of great worship songs over the years- ‘Even So Come’, ‘Remember’, ‘My Victory’, ‘Simple Pursuit’, ‘Glorious Day’, ‘Build My Life’, ‘This We Know’, ‘God, You’re So Good’, ‘Follow You Anywhere’, ‘Bigger Than I Thought’, ‘There’s Nothing That Our God Can’t Do’, and ‘All Praise’, are just some of the many, many songs over the years that have come from Passion annual conferences, and songs that have travelled not only to Sunday morning church services, but into our hearts and our homes as the years have progressed. Passion has been an instrumental part of my spiritual life over the last 10-15 years, and thus they will still hold a special place in my heart, even though now, artists like Chris Tomlin, Christy Nockels, Matt Redman, and Charlie Hall are not involved in the Passion movement anymore, and thus replaced by Melodie Malone, Chidima, Brett Younker and Sean Curran. Regardless of the ‘band member change’; Passion has continued to deliver powerful worshipful songs, and annual albums that have pierced our hearts over the years, and this new offering of music is no different. While Passion didn’t release a Passion 2021 album (they instead unveiled the double single ‘Breakthrough Miracle Power/You Are the Lord’ as well as a Christmas EP Hope Has a Name in 2020), they have been busy this year (2021/22), with the release of 2 EPs as the band starts to get back into releasing music- Live From Rehearsals that released on December 17th 2021; and Burn Bright released on January 3rd 2022.

Let me just start by saying that I’ve respected Passion and their ministry for years, and that’s not about the change now. I’ve enjoyed many artists who have been part of the Passion movement, from Chris Tomlin, Matt Redman, and Christy Nockels, to Crowder, Hillsong UNITED, Kari Jobe, Lecrae, Charlie Hall, Kristian Stanfill and Sean Curran, to name a few. But having said all of that…here in 2022, I’ve found that both Burn Bright and Live From Rehearsals don’t hit as hard as other Passion albums have done so, in previous years. Nothing wrong with Kristian Stanfill (now the ‘leader’ of the Passion band) and the rest of the artists represented here in both these EPs; but unfortunately with all the worship bands, artists and movements that are springing up like no tomorrow, both these two Passion EPs ought to have produced and recorded something that sounded massively different and unique compared to the other worship music out there…and unfortunately, Passion didn’t do that. Now I love worship music like the next guy.

Some of my favourite artists and bands overall are worship artists- Phil Wickham, Martin Smith, Rend Collective, Chris Tomlin, We the Kingdom, Cody Carnes, Kari Jobe, Meredith Andrews, Tim Hughes, and Crowder, are just some of my favourites over the years. Add Passion into that group too. But maybe I’ve awoken to this revelation recently, but however I came to this conclusion, I still state this to be true of how I enjoy my worship bands- back when artists like Chris Tomlin, Matt Redman and Christy Nockels were a part of the Passion ministry, they were doing their own albums and releasing worship music in a solo capacity. The Passion albums would then be more of an extension and a collection of the songs that were currently high charting from either Chris Tomlin, Crowder, Matt Redman, or Christy Nockels, and you’d know a few songs here and there because well…Chris Tomlin would be famous and so would Matt Redman. But now, Chris isn’t involved in Passion anymore (I dunno why, but I suspect that the ‘band’ is ‘evolving’ to reach a younger generation). Neither is Matt or Christy. Sean Curran, who creates his own material as well, only comes around every few albums and contributes to a track, here and there. But they way that Passion stands now, is this- Kristian, Brett, and Melodie release tracks each and every year that is part of…well, it’s not part of any solo project, because currently, neither of these three artists are currently producing solo material. It’s just…there, existing on Passion albums and nothing else. Which is fine though.

But with Burn Bright and Live From Rehearsals, I’ve found that even though I enjoyed a vast amount of songs from these two EPs (‘1000 Names’, ‘Shine Like Stars’, ‘New Thing’, ‘Beautiful Jesus’), there’s really nothing much about either these two EPs that sets them apart from any other worship movement that is operating currently now. The sense of uniqueness about Passion that brought us songs like ‘Party’, ‘You Are God’, ‘Beautiful Jesus’, ‘We Shine’, ‘Our God’, ‘Here For You’, ‘Waiting Here For You’, ‘Lord I Need You’, ‘All My Fountains’ and ‘Lay Me Down’ is gone with Burn Bright, and that’s a massive shame. Don’t get me wrong, I enjoy Burn Bright like the next person. But it’s no longer ‘unique’, and thus, Passion as it stands right now in its current form, isn’t a must-listen, especially without artists like Matt Redman and Chris Tomlin, the guys that made me fall in love with Passion and their ministry in the first place. I fully respect Passion for what they’ve done over the years, but Passion now isn’t what Passion was a decade or so ago. Call me old-fashioned, but maybe it’s because I’m ten years older, and the worship music that gets this generation of 20-somethings up and ready for action, isn’t the same worship music that impacts my generation. At least that’s what I’ve observed. Maybe it’s time for Kristian Stanfill to release solo albums, as a way for listeners to know and understand that these songs on Passion are part of a bigger solo project, and thus more people could take notice. Or maybe it’s time for Chris Tomlin or Christy Nockels to come back in a part-time capacity. Whatever the case, they need to do something quick, otherwise albums in the future won’t stand out as a whole, just the singles from each of their annual albums. They’ll be like Hillsong, without even trying.

I know I don’t like saying anything ill about Passion. But I have, and what I’ve just said is justified. Call it a rebranding or a refocus on a different generation than mine (I’m in my early 30s right now), Passion right now is like Hillsong- more of a brand name than anything else. They do have good songs- songs like ‘1000 Names’ is arguably one of my favourite worship songs of 2021, while ‘Shine Like Stars’ has the potential to become Passion’s next big hit, since songs like ‘There’s Nothing That Our God Can’t Do’, ‘God, You’re So Good’, ‘How Great is Your Love’ and ‘Glorious Day’. But after hearing both EPs numerous times, I’ve come to this conclusion, that this ‘generation’ of Passion isn’t hitting home to me as I should’ve…and that’s ok. I’m learning now that it’s perfectly ok to enjoy an era of a worship band more so than another era, and that’s what is happening with Passion. The era of 2005-2015 of Passion has been life-changing for me, and I’ve loved that era of Passion more so than any other. That doesn’t mean that Burn Bright or Live From Rehearsals is bad. On the contrary. These EPs are still good. It’s just not what I was expecting. And to be honest, I probably won’t listen to much of Burn Bright in the upcoming months ahead. And that’s not an indication that Burn Bright is bad. It’s just that I enjoy Chris Tomlin, Christy Nockels and Matt Redman much more than I care to admit.

I’ll forever be grateful to Passion for the worship songs over the years. But as Passion evolves into the future, I don’t think that I’ll be moving with it. At least not in the near future. I’ll still check out the new Passion album every once in a while, as the years roll on. But it won’t be as religiously as before. Maybe it’s time for Melodie Malone to make a studio album with her songs from Passion. Maybe Kristian Stanfill needs to release his long-overdue second album after Mountain Moves. Whatever the case to get Passion and their music more interesting, they should consider. Till such a time where I’m completely wowed by a future project by Passion, I’ll re-listen to albums like Take It All, White Flag, God of This City, How Great Is Our God, Awakening, Let the Future Begin, Everything Glorious, Here For You, and Even So Come. Maybe, just maybe, after I’ve gone through listening to all these albums, I’ve aforementioned, then they’ll be something new from Passion that I can be excited about. Who knows? Only time will tell. For now, who’s excited for a new album from either Chris Tomlin, Christy Nockels, or Matt Redman, maybe in the upcoming year ahead? You know I will be!

3 songs to listen to: 1000 Names, Beautiful Jesus, Shine Like Stars