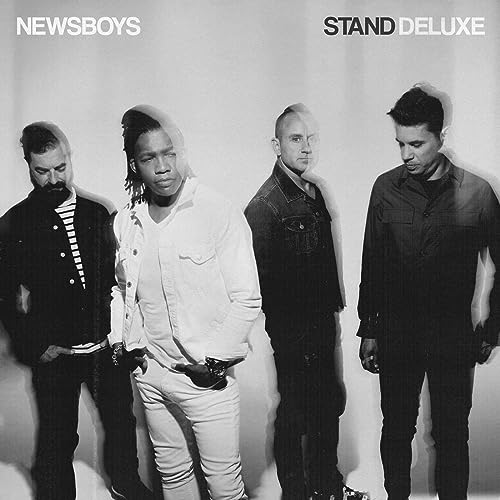 One of the most inspiring, honest, vulnerable, comforting, moving, thought-provoking, comforting, and confronting artists I’ve heard throughout the almost 33 years I have been alive; is the Aussie CCM band Newsboys. Comprising of Michael Tait, Jeff Frankenstein, Jody Davis, and Duncan Phillips; this 30 + year old band originated in the Sunshine Coast of Queensland. My brother Jon wrote a blog about the group a few years ago, that you can read about here, as well as his most recent reviews on the band’s 2021 album STAND from last year, and their 2019 album UNITED, which reunited long-time members Phil Joel and Peter Furler for a season- for the highly popular Newsboys United tour as well! One of the bands that I was listening to starting from back in 2006 until now- it was this band amongst others that helped me expand my musical horizons beyond just Carman and Delirious?. Not that those aforementioned artists were bad in any way (check out blogs about Carman and Delirious? here and here!); but when you look at Newsboys and their impact the humble Aussie band have had on the CCM industry as a whole (read our blog about Newsboys here!)… how could you not be enamoured and impacted by their music? Songs like “Breakfast”, “Shine”, “He Reigns”, “Love Liberty Disco”, “It Is You”, “Million Pieces”, “Entertaining Angels”, “In Wonder”, “Wherever We Go”, “In The Hands Of God”, “Born Again”, “God’s Not Dead”, “We Believe”, “Guilty”, “Crazy”, “I’m Not Ashamed”, “You Are My King (Amazing Love)”, “Step Up To The Microphone”, “Stay Strong”, “Glorious”, “Lord (I Don’t Know)”, “Thrive”, “Devotion”, “Presence (My Heart’s Desire)”, “I Am Free”, “That Home” and “Live With Abandon” have all impacted my life, and most likely the lives of many people in the whole world.

Even with Michael Tait replacing Peter Furler as lead vocals back in 2009… listeners and critics have embraced Michael and welcomed this transition of lead vocals with open arms. The result is a group that has been around for over 30 years, who has presented the word of God in their songs many, many times, and a band who is unashamed of the gospel; and whose mission is to draw people closer to Jesus, regardless of how popular that may be or look like to the modern mainstream, and at times now accepted world at large. In 2019, the group released their most ambitious project in probably CCM history. UNITED featured the return of Phil Joel and Peter Furler- and you can read all about the album and our thoughts here. If you’re fascinated about Newsboys generally and their history though, you can read their Wikipedia… but since yesterday is when Newsboys have released their ‘brand-new’ album in STAND (Deluxe); well I’d say that it’s time to let you all know my thoughts of this project, and give you all my two cents’ worth, don’t you think?

Releasing almost a year after the standard edition of STAND, and comprising of 14 tracks as opposed to 10, some could say that the release of this deluxe version of STAND might be a tad redundant. And… they’d be right. Don’t get me wrong, STAND is a compelling album and quite poignant, powerful, honest, and worshipful. It’s not the most outstanding Newsboys album ever made- that honour would have to go to Go, UNITED, Born Again, Devotion, Adoration or even In The Hands Of God. But STAND was solid, and certainly worth many listens. However, I expected more from a deluxe version. Releasing deluxe editions or special edition albums of highly rated, popular and well-received albums… well, doing that right is a feat in and of itself. I’m of the firm belief that if you’re an artist, you either unveil a deluxe edition album the same day as the standard edition, with 3-4 new tracks (so that you give listeners plenty of options at the same time!); or if you release a deluxe edition 1-2 years later, then you have around 8-9 or 10 extra tracks tops. Newsboys… did neither.

If you want to read all about the standard edition of STAND, then read our review here. I stand by everything Jon has written- and there are good songs (“I Still Believe You’re Good”, “Come Through”, “Never Too Far Away”). But the album as a whole isn’t that cohesive. A year later, this deluxe edition semi-rectifies the lack of cohesion; but still fails to deliver that “God’s Not Dead” or “We Believe” moment that Michael Tait has on previous albums God’s Not Dead and Restart respectively. The title track is re-updated with the new vocals of TobyMac in the bridge, and from a creative or inventive standpoint, this rendition just isn’t that great. But if we can look past the tackiness of the song (I don’t think it was re-recorded by Michael Tait, but rather Toby’s new vocals were just ‘pasted on’!), I firmly believe that this song is what the world needs right now. With the world being divided so much because it seems like people are being cancelled left right and centre for what they do or don’t believe about x, y, z and every other issue underneath the sun, a melody like “STAND” is refreshing. Because when it all comes down to it, you stand for something, you stand of your convictions, for your non-negotiable primary issues that you won’t ever, ever bend; yet outside of that, you can have dialogue and discourse with people who disagree with you, and find common ground in the messiness of discussions about life. Standing for something doesn’t mean you hate those who don’t agree with you; and this song reminds us to be firm in our convictions, but love others and show others Jesus as well.

Even though the execution of the new version of the title track semi-fell flat, there is still nobility and dignity in many of these new recordings. “King Of Kings”, a Hillsong cover, is sung with Bart Millard of MercyMe, with the original song having released as a single in mid-2019- we actually reviewed the song here. One of the most theologically and biblically sound melodies to come out of Hillsong in a while; right now, Hillsong isn’t that popular at the moment. Yet to me, that doesn’t discourage me from listening to any Hillsong song- because more than ever, we need to separate the art from the artist. And so, when Newsboys unveiled their pop/worship cover of “King Of Kings”; I was intrigued. Hillsong aren’t my favourite worship band ever, but “King Of Kings” is a near-perfect worship song- and Newsboys deliver a high-quality cover and a song that proves that these guys are still relevant and relatable to the CCM market. On the other hand, “Jesus Did”… well it’s solid, but it’s not spectacular. With Michael as effervescent and exquisite vocally as ever, “Jesus Did” is as poppy and as CCM as any Newsboys melody I’ve ever heard. There’s nothing wrong musically, nor even lyrically with this melody. But the ease at which questions can be answered without any probing or wrestling with doubts; well, it makes this song pretty simplistic, don’t you think? As Michael fervently declares that ‘…I didn’t think that I could ever change, or that my heart would even want to, all the fears that I never faced were building lies I couldn’t break through, nobody else could’ve reached for me, could’ve pulled me out, could’ve set me free, hallelujah, Jesus did…’, we are presented with a testimony type track, but still a track that paints the Christian life as being an easy life and as being like sunshine and rainbows. To be fair, songs on CCM radio are pretty simplistic, and bands like Newsboys sometimes dive into the cliché lyrically. But as the lead single to this deluxe edition album; “Jesus Did” is just ok, and isn’t as ‘wow’ as I originally thought it would be. Newsboys then round out the deluxe edition of STAND with an acoustic rendition of “I Still Believe You’re Good” (a version that is similar to the original recording, and not needed at all!); and the original recording of “All Things Are Possible”- a vibrant, energetic pop melody about acknowledging that everything is possible for Jesus, but a pop song nonetheless that isn’t that ‘wow’ and doesn’t stand out that much.

What more can I say about STAND (Deluxe), that I haven’t mentioned already? Personally, I reckon this album on the whole is solid; but it’s impact could’ve been much greater if it was released last year along with the standard version, or if the standard version of the album wasn’t released at all. Songs like “We Believe”, “God’s Not Dead”, “Born Again” and “Guilty” to name a few though, are more poignant and inspiring than any song on STAND (sad to say!); and this album on the whole reminds me of the Love Riot era- probably my least favourite Michael Tait era; and if you’re not a fan of Michael Tait as lead singer and prefer Peter Furler instead, then STAND (Deluxe) probably won’t resonate with you. But I’d say check it out anyway, as you never know if your new favourite song will be present on this release or not. As the overall encompassing theme of Newsboys’ latest project is one that is being convicted and passionate to stand for Christ in everything that we do; we are reminded by this fact and are encouraged to be more active in our faith. New songs like “All Things Are Possible” and “Jesus Did” aren’t their best songs, but they aren’t Newsboys’ worst. And so, I will say this: well done guys, for collection of new songs that inspire and provide hope and security in Jesus Christ; and an album that still makes us think. I can’t wait to hear what God has in store for you next in the future!

5 songs to listen to: I Still Believe You’re Good, King Of Kings, STAND, Come Through, Never Too Far Away