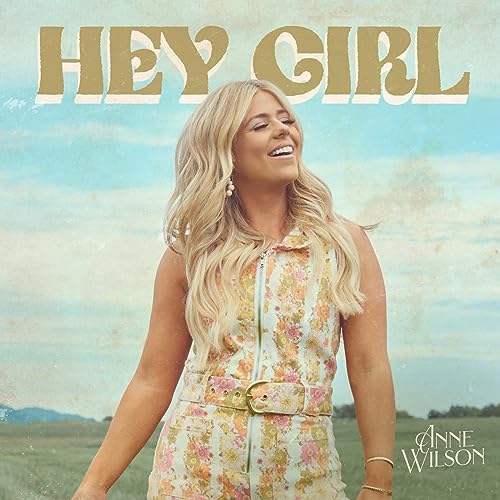 If you’re listening to an artist for the first time, trying to figure out their sound and what they’re all about; do you go in with high, low or no expectations? Well, I guess you’d say it depends on whether the artist you’re listening to for the first time, actually is a new artist or is a veteran- and then they’d have a reputation; and you will have a higher expectation than with a completely new artist. Regardless, Anne Wilson (one of the latest signees to Capitol Christian Music Group), is sure to have a bright future. Though I did have some expectations of this young woman of God (considering that she has signed to one of CCM’s most reputable record labels); it is her storytelling, her effervescent optimism, her steadfast faith, and her immense love for Jesus that has won me over as a fan! With Anne singing in public in front of a crowd for the first time at her brother’s funeral- and her garnering a record label deal that way when the video went viral (way back in 2017); Anne’s unwavering faith in Jesus is the backbone of her debut single “My Jesus”. Released as a package of 3 songs in the middle of April 2021, Anne’s joy and overflowing hope is sure to win even the most hardened of sceptics- and even as Anne wears us all down by her joyous demeanour, let us remember that we are watching a star in the making- and someone we all want to root for! While we have indeed reviewed this ‘single’, also comprising of “Devil” and “Something About That Name”; we also voiced our opinions about Anne’s live EP. A live project in Nashville (not with a crowd but live in a studio) called My Jesus (Live In Nashville) – EP, we are met with a vibrant, emotive, personal and honest batch of songs, where Anne delivers her already previously released three singles with intense passion, as well as an all-new track “No Place Like Home” and a cover of Little Big Town’s “Boondocks”.

This year, Anne unveiled her debut full length album My Jesus, and we reviewed the album here. With standout songs like “Mamas” (a duet with Hillary Scott of Lady A), “Something About The Name”, “God Thing”, “Devil”, “Sunday Sermons” and the title track; Anne’s album was one that married country and CCM quite well. The only other artist right now that cleverly sings CCM and country music is Zach Williams; although many artists in country music write melodies about Jesus and their faith or appreciation for Christianity- ranging from Carrie Underwood, Little Big Town, Martina McBride, Faith Hill and Tim McGraw to Maddie & Tae, Lauren Alaina, Thomas Rhett, Walker Hayes, Kane Brown, Dan + Shay and Blake Shelton to name a few. And so, Anne Wilson is, to me, a once in a generation type of artist. An artist that will be on the lips of everyone in the many months and years to come. But… if you’re not convinced yet, then I’m positive that Anne’s latest EP Hey Girl will wow you, inspired you, and encourage you as you go through life in all of its ups and downs.

We spoke at length about “Hey Girl” in our review; and to quote Jon, “Hey Girl” is an anthem for girls everywhere as the track reminds each of us, especially girls, about who they are and their identity in Christ. Identity these days seem to be very crucial to people living in a messed-up world, where identity politics seem to be commonplace wherever people go. There seems to be a lack of understanding of who we are in a society that relativises almost everything, so it’s good and refreshing to hear a song that really stamps upon who girls are, and who we are as Christians. It’s a song that reminds me of the old hymn “Overcoming Child of God”… that song there spoke boldly about who we are in Christ, and so too has Anne undertaken in this new song as well- that ‘…I’m a blood-bought, battle-fought, all my shame long gone, made-new child of the King, I’m an amen, testify, holy water baptized, went down and came up clean, I’m a soul been saved by that amazing grace, and now there ain’t no way, girl, can’t take that away, girl, don’t forget you’re free, it’s who you’re made to be, hey, girl…’ And so, this new EP capitalises on the presence of “Hey Girl” as a current single, and Anne has unveiled 3 new versions of the track. A radio version of the song (which has a different intro), a live version from Rock The South, and a country ‘Kentucky’ version (complete with banjos). Is four versions of a hit song overkill, or is it a genius masterstroke? As we remember that our own worth and identity is in Jesus and not in the world, Anne powerfully and eloquently reminds us the we can look to Jesus, and we can be free from the expectations of the world and the expectations of our friends and family.

Is there anything more to say about Anne Wilson and her burgeoning impact in the CCM industry? With Anne having already made her stage debut at the Grand Ole Opry in September 2021; I don’t think I’ve been this excited for an artist’s ongoing discography and musical journey since We The Kingdom and their songs! So… let’s drop everything and hear about this young star in the making. This EP and Anne’s debut album! Seriously! Go do it. Right now! No other excuses needed! Alright, so what do you think? Well done Anne, I seriously cannot wait to hear what God has in store for you next! Maybe a hymns album or a Christmas album, or even a full-on country album marketed at the mainstream? That’d be cool!