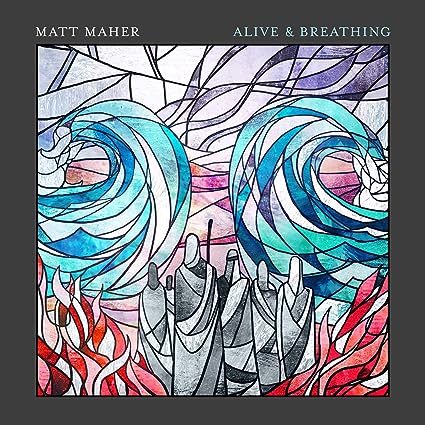 Canada. Not the U.S. But Canada. Oh how we love Canada. With music artists borne out of this splendid country, from Amanda Cook, Jon Bauer, Manafest, Tim Neufeld, The City Harmonic and Hawk Nelson, to newworldson, Thousand Foot Krutch, Love & the Outcome, Starfield and Downhere; we have been blessed over the years to be given the gift of these musicians from across the border. Now we hear another popular singer/songwriter/worship leader who has become one of the most emotive, humble, heartfelt and encouraging deliverers of music and song- Matt Maher. A committed Catholic within the CCM industry, Matt has shown us time and time again his song-writing prowess with hits from across the years of his music ministry, with songs like “Your Grace is Enough”, “All the People Say Amen”, “Lord I Need You”, “Turn Around”, “Rise Up”, “Christ is Risen” and “Hold Us Together” being some of his most loved songs throughout the years. Matt’s honest approach to worship music is what makes him quite possibly one of the most underrated worship artists this turn of the millennia. His most recent album to be unveiled was Echoes from 2017, and featured hit songs that charted the radio and spoke to millions of people over the years, songs like ‘What A Friend’, ‘Your Love Defends Me’, ‘A Thousand Tongues’ and ‘Just As I Am’, to name a few. Now here we are in 2020, and Matt’s most unique project has just been unveiled in the form of Alive And Breathing.

Now hang on, you say. Didn’t we as a site review this album before? Well…yes and no. Throughout various points in 2019 (and one interval in 2020), Matt himself has been unveiling EP’s consisting of 3 songs each- all of them being aptly titled Alive and Breathing Vol. ___. There are 4 volumes and each follow a similar pattern- there’s a new song recorded- either studio or live. There’s a live recording of an already-studio song. Then there’s a live recording of a ‘new’ song, but the song has been recorded before by another artist. You get the picture? Mix around the song order, add in a couple of new tracks, alongside a great combination of new and old, and Alive and Breathing the full-length album was borne. And standing at 14 tracks (12 of which have been released previously and also reviewed in their entirety by my brother Josh, with the links for Alive and Breathing Vol. 1, Vol. 2, Vol. 3, and Vol. 4 revealed here, here, here and here respectively); this new offering of songs, both old and new, is very reminiscent of All the People Said Amen way back in 2013, and maybe that’s ok.

‘…25 years ago, my life forever changed. I moved with my mom to Arizona and began going to Church. Ever since then, my life has felt like it moves in seven-year ‘chapters.’ In 2013, I stumbled onto a format of recording that was a hybrid of live music (unedited and raw), along with new studio songs. It was called All The People Said Amen. That format seemed to strike a nerve with people. Seven years later, it seems that once again I’ve reached a place of reflection. Before stepping into the next new musical season, I wanted to recap some of what I have been blessed to be a part of as a songwriter and as an artist. Along the way, new songs came out that spoke a lot to my heart. Songs are landscapes for living memories. This project, like the album cover, is kind of a soundtrack for crossing one season to the next, remembering the faithfulness of God in the past while declaring His goodness in the present and to the future…’ It is in this quote that I realise that journey and process for an album, let alone a compilation-style album, is made. And with this unique collection of songs that seem to follow structurally the 2013 album in every sense of the word; we see a variety of songs that have charted the radio over the years, and some that are fast becoming fan-favourites, even though they are relatively new. Just one look at the track-listing and we see songs that we are familiar with- ‘Soul On Fire’, ‘White Flag’, ‘Come As You Are’ and ‘Here For You’ are all newly recorded live, probably on tours and such, and all these songs, as we think they are covers, are in fact not. Released by Third Day, Passion (in particular Chris Tomlin), Crowder and Matt Redman respectively; all these four songs have indeed been co-written with Matt as well. And so it was good to see Matt’s renditions of these four songs here on this album- maybe studio recordings of these covers in the future? ‘Lord I Need You’ (both the English and Spanish versions), ‘Your Love Defends Me’ and ‘Because He Lives’ are some of the most famous songs Matt has ever recorded, and live renditions of these already-great songs speak to how great Matt is live, and how his song progressions live are as poignant and emotive, or even more so, than the original recordings. Matt also gave to us a handful of new songs- ‘Run to the Father’, originally recorded by Cody Carnes last year, was co-written with Matt and is by far one of my favourite worship songs of late. I reviewed the song in its single status by Cody when it dropped last year, here; while ‘Come Holy Spirit’ (a song that for me feels more at home an artist or group like Bethel Music or Jesus Culture recorded it) was co-written with ex-Delirious? lead singer Martin Smith and was originally on Martin’s live album Love Song for a City. The song here is good, but for me I felt it was a tad too long, maybe over 5 or 6 mintues would’ve been good, but not close to 9- people sadly don’t have that much attention span for that. Nevertheless, Matt has given to us a great song worthy enough to be placed in Sunday morning worship service song-lists in the months to come.

‘Alive and Breathing’ is the current radio single from Matt and is the first track on the 14 song compilation collection. It is a reminder of the fact that we still have a purpose and work to do if we are still alive and breathing. Every moment on earth is a gift we ought to treasure, and that our purpose to be fulfilled and for us to share our calling with others and give them all encouragement, is the better part of of it served when we’re still here on earth breathing and living from day to day. We are reminded of the transientness and fragility of life everyday, and so such a song as this ought to also give us peace and spur us on to undertake the things God has in store for us, because frankly, if we’re alive, then our work, maybe even our best work, is still ahead of us, right? ‘Joyful Noise’, track #2, could quite possibly be another radio single in the future, and is about how new songs are as emotive and powerful as old ones. There’s a uniqueness about singing age-old hymns and songs, but often a song comes along that is written recently that has a sense of passion and enthusiasm about it- ‘Joyful Noise’ is such a track. It is our calling to make disciples of people all over the world, and often that requires us not necessarily to go in all guns blazing, but to have a plan. And maybe all we need to do is just to shout and have a joyful noise- in the end, how we live our lives is a far better witness than just speaking and trying to win an argument. ‘Lord of My Life’ is a song of always going back to the Lord for things we need but also as I remind myself that God is who He says He is- as we long for Him to ‘…be the song I sing, be my guiding light, Savior of my soul, be the Lord of my life, every step I take, always by my side, I am yours, You are mine, be the Lord of my life…’; while the last remaining song on Alive and Breathing is new song ‘Light the Way’; a song that is destined to impact and challenge the church in the topic of obedience and God lighting the way in the most absurdist of moments. It is when we realise that God calls us in the unlikeliest of circumstances, that we can as the question- will we leave our comfort zone and follow Jesus in the places where He is lighting the way, even if it may seem scary or even uncomfortable?

There you have it- Alive and Breathing. 14 songs. Full of live songs, new studio songs, even some live renditions of songs that Matt hasn’t sung, up until this point. Nevertheless, this musical offering has been a joy to listen to as I am reminded of Matt’s skill and quality of being one of the most underrated artists of the modern CCM industry. Still, his collection paves the way for another new project whenever that may arise, and until then, all we can do is marvel at the impacfulness of these songs over the years, but also even now. Matt’s music helps his fath, and music in general helps people too. Matt’s music has found people being impacted in such a profound way over the years, and this new album is no different. While listeners could potentially be hesitant in listening to his music because of his Catholic faith background, Matt continues to bridge the gap between Protestants and Catholics (alongside Audrey Assad) to always provide us heartfelt songs that can be sung by both these diverse denominations alike. Matt’s heart for the presence of God is very much evident throughout- and this album will be loved and cherished alike if you love great modern worship alongside a similar musical vein to artists from Passion, Kari Jobe and Audrey Assad. Well done Matt for such a poetic, engaging and compelling collection of songs, and one of my personal standouts in within these last few months.

3 songs to listen to: Alive & Breathing, Run to the Father, Light the Way