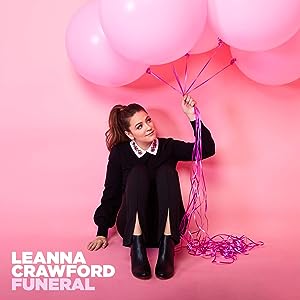 ‘…Since releasing her debut 3 song EP way back in September last year, indie singer-songwriter/pop CCM artist Leanna Crawford has become one of my favourite indie artists of late. Introduced to me purely through a tweet by a favourite artist of mine, Matthew West, this new and up-and-coming musician has delivered songs with heart and hope in her 3 song collection Crazy Beautiful You, and now releasing a new and updated EP featuring 6 songs (unveiled on January 19th 2018, and titled Crazy Beautiful You Deluxe), Leanna has delivered yet again a collection of tracks certain to be enjoyed and loved by anyone who loves CCM, Matthew West (most, if not all of Leanna’s music has been co-written with Matthew West), or just Christian music in general. And if you haven’t really heard of Leanna and her music, don’t worry…because apart from her facebook, twitter, and a couple of quotes here and there on her bio page on her facebook, there’s virtually no information about her at all. Yes, that’s correct. No information! Recently on the All In Tour with Matthew West and Jordan Feliz (of ‘The River’ fame) late last year, I have had virtually no understanding of Leanna aside from these six songs I’ve heard from her debut EP (three of which released in September 2017). So therefore, it made my initial review as well as this one much more difficult compared to other reviews of other music by artists much more well known…and maybe that’s ok!…’

This above quote was the introduction to a Leanna Crawford review back in 2018. And now with the passing of time of 2 years, a lot has changed. Yes, back then when she was unsigned, she did release an EP to moderate success, and for me when I heard it years ago, I felt that she was special. Little did I know that years later, she’d be signed to Provident Label Group, and releasing her label debut song. Still, in 2020, we see what an artist Leanna has grown into- one that is confident about who she is singing about, and one who’s not afraid to be a little quirky and weird, because it is often the different that impact people the most. Leanna is one such artist. And upon the success of songs like ‘Crazy Beautiful You’, ‘Write About it’ and ‘Prince Charming’ all the years ago, we see yet another song venture out as a result of the label signing- her ‘debut’ song on Provident Label Group is indeed one that I’m sure will spark a lot of discussion whoever you are, in a song called unusually, ‘Funeral’.

Yes, having a song called ‘Funeral’ can seem like an initial bummer, but when we hear the story behind her song, and why she’s calling such a song such a name, we see the beauty of the word ‘Funeral’, and why she is encouraging us all to have one in our lives, but not in the way that we think. The song itself declares our identity, firm and solid, in the foundation of Christ Jesus, and that who we were before we knew Jesus wholeheartedly is far different to who we are when we follow Jesus to the fullest. Though initially we may think that the song ‘Funeral’ offers a sombre tone, the song itself is anything but- with pop becoming the focus of Leanna’s song. In it, Leanna declares that she is throwing a funeral- but not for any old person, but for herself, and more specifically, herself before she knew Jesus. For the old me, the me that was self-centred, who was selfish, who was full of hate and bitterness, who lived for themselves. It is a reminder that a funeral is the end of something, but is also the beginning of something else, a new beginning if you will. It is a reminder that who we were is just that- who we were. That who we’re now is grounded in who He is and what He’s done for us. That is it. Inspired by the Bible passage in 2 Corinthians 5:17, where we are reminded that we are indeed a new creation, that the old has gone and that the new is to come; Leanna has given a song that is the perfect start to her career on Provident Label Group. An artist that I’m sure will have many, many albums to come, she’s become one of my favourite new female artists of late- the other being indie artist Rachael Nemiroff…who knows, maybe Rachael can sign to a label in the future as well? Well done Leanna for such a challenging song, can’t wait for the upcoming full-length project, whenever it arises.