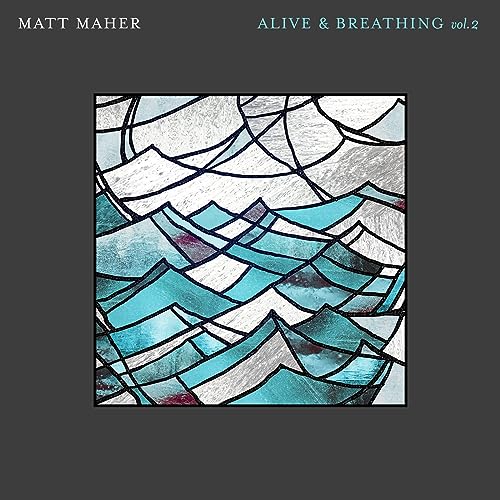 One of today’s most creative and inventive worship leaders and singer/songwriters of the modern CCM era, Matt Maher, famous for his smash hit single “Your Grace Is Enough” (made popular by Chris Tomlin) and also writer of inspiring hits such as “Turn Around”, “Hold Us Together”, “Christ Is Risen”, “Because He Lives”, “What A Friend”, “Your Love Defends Me”, “Lord I Need You” and “All The People Said Amen”; is one of my favourite artists of the worship genre and of the past few years. ‘Why?’ I hear you asking? Well it’s really simple. It’s partly due to Matt’s vulnerability and transparency (evident on his latest album Echoes) and also due to the relevance of his music on today’s society. Having released Echoes in 2017 (of which you guys can read my brother’s review right here!); as well as releasing a Christmas album in 2018 (The Advent Of Christmas); this year it the time for Matt to unveil to us something new. And embarking on a new and exciting project, Matt Maher is! A brand new single titled Alive And Breathing Vol. I released last month (which is strange as it’s basically an EP of 3 songs!)…and now the 2nd instalment of this EP called… Alive And Breathing Vol. 2 has just dropped. The 2nd in 4 instalments, which will probably eventuate into an album of 12 songs; let’s see how Matt has wowed us this time!

And wow us does he! Yep, I am speaking like Yoda to prove a point! Matt’s latest tracks are exquisite and very soothing. Original piano led track “Alive And Breathing” is sung with Elle Limebear (Delirious? frontman Martin Smith’s daughter!) and essentially relays to us the eternal truth that if we are alive, and if we are breathing, then we can and ought to praise God for giving us life and allowing us to live and fulfil His purpose here on Earth. “Because He Lives”, probably one of Matt’s biggest worship hits aside from “Your Grace Is Enough” and “Lord I Need You, is given a live treatment, that is thoroughly enjoyable, even though the track sounds similar to the original studio version. The EP then ends as quickly as it begins (as it also did with EP No. 1!), with a cover of the Third Day smash hit “Soul On Fire” from 2015. It’s another live recording with is professionally done and sounds exceptionally good, which makes me think that maybe Matt could release an album full of covers, or songs he’s written in the past but haven’t recorded as of yet… Regardless, Matt has once again shown us why he is still relevant and why his music still resonates with all of us. An album may not be coming soon, but that doesn’t matter because there will be a total of 4 EP’s to enjoy- and this EP is a must for fans of Matt’s and of worship music in general.

Matt Maher is a household name in terms of worship music, and now that He has recorded a brief but stellar EP; these are indeed songs for those who want to feel closer to God, and a must listen if you want to find some inspirational and hopeful melodies that you can sing at all times! Well done Matt, can’t wait for your next full-length studio project and whatever else you have up your sleeve!