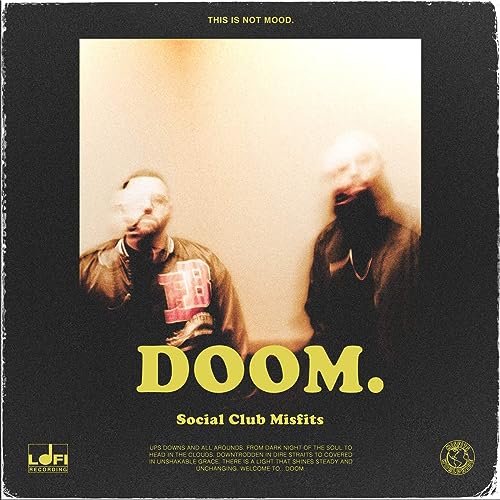 If I had to pick one artist that has had a big year over the year of 2018, in terms of their career, it’d have to be Social Club Misfits. A rap/hip-hop duo comprised of best friends Fern and Marty, these two rappers have a big heart for Jesus, and were signed to Capitol Christian Music Group around about three and a half years ago. The Misadventures Of Fern And Marty was the duo’s label debut; and released in 2017 to moderate success; yet it was only in 2018 that Into The Night propelled them to greater heights and to stardom. And while I myself haven’t been that much of an avid listener of any rap artist in general, Social Club Misfits have changed my outlook on this genre, along with artists like PEABOD, Lecrae, Group 1 Crew, KB and Andy Mineo. It’s hard not to love Fern and Marty’s music after hearing both give powerful testimonies (in separate videos!)- and I’m sure when you guys watch these videos too; you’ll be blessed! While we as a site unfortunately never reviewed Into The Night; the duo have quickly unveiled their fresh, reinvigorating and extremely poppy EP MOOD. this past month (and you can read our review here!). From the head banger “Everytime” to the introspective “So Our God Came To Us”, this 5-track too-short release ticks all the right boxes technically. And now it’s time to feast our eyes on the group’s next release. DOOM. EP… so let’s dive in to see whether there is some lyrical meat on these offerings, shall we?

Opening the tracklist is the captivating and enthralling title track, where both Fern and Marty earnestly and fervently unveil vulnerable details about their lives, in order for the music to feel authentic and also to show us listeners how much God can take a broken person and make them whole again. Reiterating that because Jesus is there with us, there’ll be no more doom; Fern and Marty have delivered an opener filled with life and vitality as we are transfixed and amazed by the calibre of such a song like this. Lead single “Believe” follows, and is as experimental as any rap song goes. Musically, these guys are taking quite a risk here, while lyrically Fern and Marty are spot on, as they impart to us that even though we can’t see it, Jesus is here watching us thus we can fully believe in His word and promises.

The rest of the EP is just as hard hitting and poignant as the first two songs. As like with “Que Lo Que” in MOOD, “Tamo Aqui” (feat. Rey King) also highlights the duo’s heritage, while also exhibits gratitude for everything that has happened in their life because of God; while the underwhelming and somewhat nonsensical “God WYA” is a bit of a let down, aside from the pretty cool lyric video of the duo singing as animatronic puppets. “Enough”, one of my personal highlights on this release, features the guest vocals of Austin French, as the topic of identity is touched upon, with Fern and Marty relaying to us that while we are alive and have Jesus inside of us, then our identity is always going to be in Him. The EP then ends with the personal and emotional “Stones”, where both rappers relay the notion that we all need to have a work life balance in our lives- that we can’t just keep going and start running on empty otherwise we will break down and maybe won’t get up again. It’s a sobering track, but probably the most relevant and needed of the bunch.

DOOM. from Social Club Misfits is definitely something special, just as MOOD. was. It’s an EP that musically is quite diverse but still like SCM- and it’s these songs, specifically “Believe” and “Enough” that will be on the ears and lips of listeners for a while yet- and it helps too that Fern and Marty aren’t forgetting their Christian faith and are letting us know that Jesus is still the centre of their lives. I’m not sure what the sound will be like from Social Club Misfits’ upcoming third full length album (which they have said countless times is coming soon!), yet I am intrigued, and that is in part thanks to DOOM. and MOOD. So, what are you waiting for? Social Club Misfits are going to take off in ways you could maybe never imagine, so I suggest you jump on the bandwagon right now and be amazed!