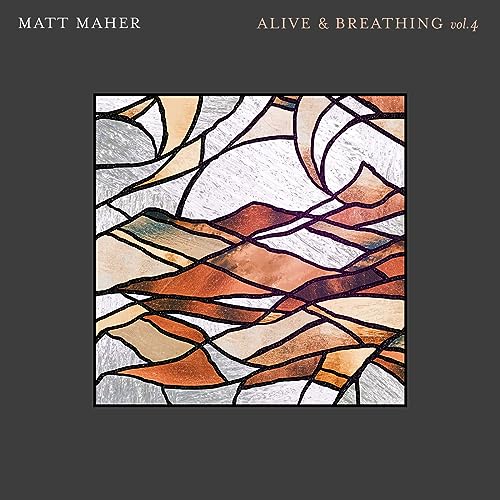 One of today’s most creative and inventive worship leaders and singer/songwriters of the modern CCM era, Matt Maher, famous for his smash hit single “Your Grace Is Enough” (made popular by Chris Tomlin) and also writer of inspiring hits such as “Turn Around”, “Hold Us Together”, “Christ Is Risen”, “Because He Lives”, “What A Friend”, “Your Love Defends Me”, “Lord I Need You” and “All The People Said Amen”; is one of my favourite artists of the worship genre over and throughout the past few years. ‘Why?’ I hear you asking? Wouldn’t it be Hillsong or Chris Tomlin or Bethel Music or Jesus Culture or even Phil Wickham- artists who have revolutionised worship music to a larger extent than Matt? Yes of course, these artists make my list (which is a list in my head!) but the reason why Matt’s on my list also even though he’s not that influential in compared to some of his contemporaries…is really simple. It’s partly due to Matt’s vulnerability and transparency (evident on his latest full-length album Echoes) and also due to the relevance of his music on today’s society. Having released Echoes in 2017 (of which you guys can read my brother’s review right here!); as well as releasing a Christmas album in 2018 (The Advent Of Christmas); this year it the time for Matt to unveil to us something new. And embarking on a new and exciting project, Matt Maher is! A brand new single titled Alive And Breathing Vol. I released in September 2019 (which is strange as it’s basically an EP of 3 songs!)…and the 2nd instalment of this EP called Alive And Breathing Vol. 2 released a month later. With Matt releasing Alive And Breathing Vol. 3 a month later; now we’ve come to the point where…yep- you guessed it! Alive And Breathing Vol. 4 releases this past week, ahead of the full length album dropping in March, titled Alive And Breathing; so let’s see how Matt has wowed us this time!

And…of course this EP is just as powerful and compelling as the other three! Matt has pulled out all of the stops and then some more- still abiding with the same format of 3 total songs, 1 brand new song, 1 live song and 1 live track of a song he wrote but hadn’t recorded yet. With Matt’s latest tracks being exquisite and very soothing, we are treated to vibrant and heartfelt live renditions of “Lord I Need You” (previously on All The People Said Amen) and “Come As You Are” (previously recorded by Crowder on Neon Steeple in 2014)- and these tracks are top notch and comparable to the original recordings. Yet on this EP, Matt well and truly shines with the 8 minute live EP closer- a stirring, poignant, honest, emotional and vulnerable duet with former Delirious? frontman Martin Smith, called “Come Holy Spirit”. Originally present on Martin’s live album Love Song For A City from 2018; “Come Holy Spirit” is as simple as they come, with Matt and Martin earnestly expressing that they long for the Holy Spirit to come and flow in their lives; vividly singing out fire imagery, and ardently highlighting across slower paced electric guitar and keys, asking Jesus to be present in every aspect of life. With “Come Holy Spirit” being slow in nature, we are ushered into a reflective moment of worship with our Lord and Saviour;  and with that, Matt has once again shown us why he is still relevant and why his music still resonates with all of us. And while we wait for the full-length album Alive And Breathing to release; let us eagerly enjoy the full total of 4 EP’s- and this EP is a must for fans of Matt’s and of worship music in general.

Matt Maher is a household name in terms of worship music, and now that He has recorded a brief but stellar EP; these are indeed songs for those who want to feel closer to God, and a must listen if you want to find some inspirational and hopeful melodies that you can sing at all times! Well done Matt, can’t wait for your next full-length studio project and whatever else you have up your sleeve! Because if it’s as half as good as the Alive And Breathing EP’s, then we’re in for a treat!