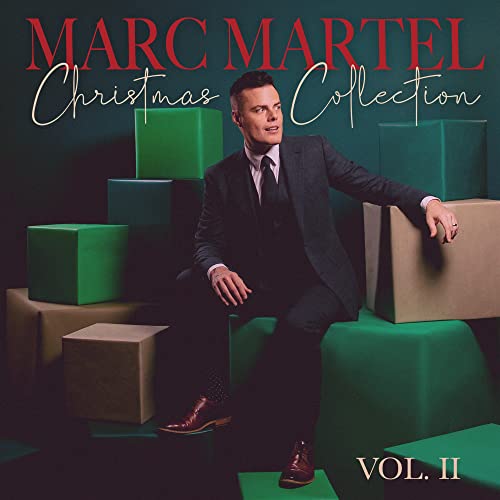 Everyone knows Marc Martel. And yes, I can say that statement with utter assurance of it, because ever since Marc himself sent over his home video of a cover of Queen’s ‘Somebody To Love’ all those years ago as part of a competition, people have known him to be a ‘Freddie Mercury impersonator’ (at least in terms of voice), as Marc himself is now well known in the mainstream industry for having ‘the voice’ just like how Freddie had when he was alive. Sure enough, Marc himself lent his own vocals to be the singing voice of Rami Malek in the biopic movie Bohemian Rhapsody a few years ago, while also unveiling his very own Queen tribute EP titled Thunderbolts and Lightning (of which we as a site reviewed here); but that’s not what Marc Martel was initially famous for in the beginning. Sure, from now on end, people would know him to be the artist who has a strikingly similar voice (sometimes even eerily uncanny) to the late great Freddie, Marc was once part of a Canadian CCM band downhere. They were moderately successful (and very much underrated) once upon a time, delivering standout songs like ‘The More’, ‘Here I Am’, ‘Let Me Rediscover You’, ‘A Better Way’, ‘You’re Not Alone’, ‘How Many Kings’, ‘Surrender’ and ‘Rest’ (to name a few); while Marc himself made a name for himself in the mainstream industry post-downhere (and pre-‘Somebody to Love’), with his 2014 album Impersonator.

Not to mention his EPs My Way, Vol. 1 and My Way, Vol. 2, alongside a slew of Christmas EP’s over the years, as well as an acoustic album full of Queen hits titled A One-Take Rhapsody, and Marc Martel has been very busy ever since downhere disbanded in the early 2010s. Still one of the most powerful and prolific vocalists (in both CCM and mainstream) in the past 10 years or so; Marc has gifted us powerful original songs and stellar-sounding covers, to make each release that he does, something that the listener, myself included, can be eagerly anticipating. Now in 2022, and upon the heels of his 2020 and 2021 Christmas EPs (Thank God It’s Christmas and Hark! Respectively), we see Marc unveil The Christmas Collection, Vol. II, comprising of 18 tracks (6 tracks from Thank God It’s Christmas, 6 tracks from Hark!, and 6 brand new recordings). One of the most anticipated Christmas album releases of 2022 thus far, this album by Marc is a must-listen if you’re a fan of anything Christmas related, or even a fan of artists like Michael W. Smith, Celine Dion, Andrew Peterson, and…you guessed it, Queen themselves!

Standing at a whopping 18 tracks, we as a site have unveiled reviews for both Thank God It’s Christmas and Hark!, so essentially this 18 track album is in fact a 6 song EP full of brand-new songs- you can read more of what we have said about the 12 already-released songs in these reviews of the EPs, so I guess this ‘review’ of sorts is me relaying my own thoughts on the brand-new songs recorded especially for this Christmas collection. ‘It’s the Most Wonderful Time of the Year’ is the first ‘new’ song from Marc, and standing at a little over 3 minutes, this happy-go-lucky joyous holiday song reminds us that December-time ought to the ‘…most wonderful time of the year, with the kids jingle belling and everyone telling you be of good cheer, it’s the most wonderful time of the year…’ But unfortunately, not all people will think of Christmas as being a wonderful time for them. Maybe they are estranged from their family, or maybe they don’t have a family to come back to for the holidays. Maybe they just don’t have much, or maybe they are living on borrowed time. Whatever the case, there will be people that we come across during this month that aren’t as well-to-do as we are, and leading up to Christmas, maybe, just maybe, this song can spark something inside of us, as we hopefully help those less fortunate than ourselves, and possibly give them some resemblance of having a wonderful time this holiday season. ‘What Christmas Means to Me’, the current radio single from Marc, comes along next, and with big band instruments like trumpets, we see a 1960s themed track come to life and remind us that jazz and big band sounds of yesteryear can still have a comeback. With this song not straying much from the original, ‘What Christmas Means to Me’ can hopefully encourage us all to see what Christmas means to each one of us…personally.

‘Labor of Love’ (originally from Andrew Peterson’s Behold the Lamb of God in 2004, covered by Point of Grace on their album Home for the Holidays) is given the Marc Martel treatment, and with this cover, continues to assert the fact for me, that this song is by far one of my own very favourite originally written Christmas songs…ever. Marc’s version is just as poignant as both Andrew’s and Point of Grace’s, while he also relays the acoustic version of ‘Silver Bells’ on this Christmas collection as well (‘Silver Bells’, also a collaboration with Amy Grant and Michael W. Smith, was on Marc’s The Christmas Collection, Vol. I a few years ago). The ‘new’ songs from this album are then rounded out by the holiday songs ‘You’re a Mean One, Mr. Grinch’ and ‘Run, Run Rudolph’, with the former being a song originally written and composed for the 1966 animated special Dr Seuss’s How the Grinch Stole Christmas, and the latter a song by Chuck Berry about the qualities and characteristics of Rudolph, a fictional reindeer who is the subject of plenty of Christmas songs that are primarily about Santa and his reindeer. While I myself haven’t heard these originals in a long, long time (nor have I seen any Grinch cartoon…ever!), I still am in awe at how Marc himself has made these songs his own…yes, even the song about the Grinch, too. Maybe, after hearing Marc’s version of ‘You’re a Mean One, Mr. Grinch’, I can watch The Grinch with Jim Carrey later on during this month, as well?

So there you have it…18 tracks, 12 of which we as a site have already ‘discussed’, while these six songs here are Marc Martel at his finest. Marc has always been a powerful singer-songwriter, and these songs present here on The Christmas Collection, Vol. II is no exception. With a great eclectic mix between carols, holiday songs and covers present here on Marc’s album; this gift is perfect for anyone who’s been a Marc Martel fan before, or even if you’re a fan of Queen…or both. Well done Marc for this 18 track release. Looking forward to seeing how people are blessed and impacted by this Christmas collection, in the upcoming weeks ahead.

5 songs to listen to: Labor of Love, I’ll Be Home For Christmas, Light of the World, What Christmas Means to Me, Welcome to Our World/Angels We Have Heard on High