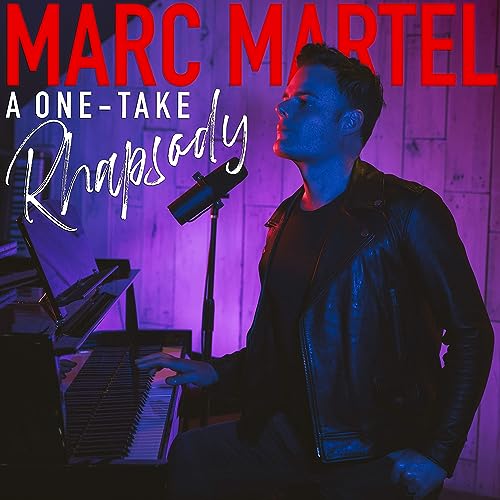 Hands up who knows Marc Martel? Anyone? Like really, really, really? A huge superfan would know that his previous hits in Downhere include “The More”, “Let Me Rediscover You”, “You’re Not Alone”, “Rest”, “A Better Way” and the Christmas hit “How Many Kings”. But for the general public who aren’t fans of Downhere… how about if I say that Marc’s the guy that vocally sounds eerily and somewhat creepily like the late Freddie Mercury from Queen- even more so than current lead singer Adam Lambert? How about then? The former lead singer of Christian rock band Downhere and a strong believer in Jesus; a writer of songs…yet also an uncanny resemblance to Freddie Mercury, and thus a popular entertainer and performer amongst fans, critics and casual listeners alike!

Marc Martel, originally from Downhere from the mid 2000’s to the early 2010’s, is quite the performer, having shown off his vocal chops in Downhere before. Yet since that band was marketed to Christians, the world hadn’t had the chance to hear Marc in action vocally. That was until one day in 2011 when Marc submitted his cover online of “Somebody To Love” by Queen, when band members were looking for unknown guys to form a tribute band and subsequently tour. This video went viral very quickly and had him on everyone’s radar? Ex-Queen members Roger Taylor and Brian May took notice, the general public took notice, and critics took notice. The rest is history, as Marc transitioned into ‘the guy who sings Christian music the no one knows about’, to ‘the guy who sings Queen music and pulls it off perfectly that everyone knows about’! After fronting The Queen Extravaganza for a while, Marc launched his own cover band of Queen, separate from the decisions of the remaining band members of Queen, and with their blessing too. In 2016 Marc started The Ultimate Queen Celebration, and now tours when he wants to, singing however many Queen songs he wants to- which is a lot going by public demand.

If you’ve got a talent, society says to use it or lose it. In the case of Marc Martel, his talent of sounding like Freddie Mercury has put him into a unique position. Usually the one to write most of the songs in Downhere, Marc was unconsciously placed in the unfamiliar category of being a cover artist- only singing Queen songs because the public demanded it, yet Marc still possessing and containing the gift of songwriting, wanting to bring it out to the fore. Would the public still love and accept Marc if he abandoned the Queen stuff and wrote his own music? Thunderbolt And Lightning, which released in 2018, is a compilation of some of the songs that started Marc’s incredible and remarkable solo journey, and the songs from Queen that mean the most to him. Because Marc has never recorded any Queen songs in the studio for an album/EP before. And for those of us, like myself, who were intrigued every time Marc toured with his Queen band and sung songs for the masses; I reckon this EP is for us. Not for the Queen die-hard fans or the guys who prefer Adam’s vocal chops over Marc’s. But for those of us who are interested to hear how Marc delivers these songs every night on tour and for us to marvel at what goes through his head as he delivers some of the most iconic rock songs ever to grace our radio airwaves and our music stores.

In fact, Queen’s music (of which I’m not that much of an avid fan, but I know enough to appreciate everything they do!) has had, and continues to have, so much of an impact on today’s society, that a biopic movie released in 2018- called Bohemian Rhapsody, with Rami Malek playing Freddie Mercury, and the singing voice of Freddie being a combination of Rami, Marc Martel and Freddie himself. So if the world before has no idea of who Marc Martel is, then they obviously will now!

You know when an artist is pigeonholed into a certain genre- and then when you as a fan or you as a critic have maybe written all that you can about them, until the point when they unexpectedly change genre? That’s the case for Marc Martel and his career post Downhere- in which he has now been known as the Queen cover artist. With half of this review being a word for word verbatim quote from my previous Marc Martel review- some would say that that’s a bad thing from Marc, that his music of Queen covers is becoming stale, and that he should record more original stuff, or covers from other artists. Some would say that perhaps Marc is using the knowledge that he sounds like Freddie Mercury and overstaying his welcome on the Queen bandwagon, and becoming a parasite in that way. But I myself am not bored in the slightest with Marc’s Queen covers. They still bring a smile to my face, and even though I’m not the biggest die-hard Queen fan ever; I do love Marc’s solo material when he sings Queen songs. God has given Marc a gift- and he is using it in full force. Sure, it’d be nice for Marc to record original songs, but if God’s purpose for him making Queen covers isn’t finished yet, well then who are we to argue with the Almighty and our Father in Heaven?

So what’s next on the agenda that I am going to briefly (and I mean briefly) touch upon? Today, Marc has unveiled his brand new EP A One-Take Rhapsody and apart from the instrument change (just the piano!) and Marc only singing a couple of well known songs (Bohemian Rhapsody, We Are The Champions) and the rest relatively unknown tracks (for the casual Queen listener), what we do have is a collection of tracks sung with raw emotion and unbridled honesty. Marc’s exquisite and impressive piano playing is thoroughly enjoyable as well, and even though we may be sick to death of Queen songs by now- there will be something on this EP that will rediscover your love for Queen songs (or Marc singing Queen songs) in no time!

I may not know much about Queen. I do know about Freddie Mercury’s impressive voice that is out of this world. But that’s about it. Yet I know that Marc Martel, still a Christian, is now making music for believers as well as for non-believers alike- but predominately Queen covers due to his uncanny resemblance to Freddie vocally. With Marc Martel becoming his own person musically after splitting from Downhere and recording his new solo material, Queen songs is  where Marc shines the best and brightest. Forget the fact that this album is a great Marc Martel EP, and forget that this album is a great Queen cover EP, or even a great piano prominent EP. Because let’s just say that it’s a great EP period. I can’t think of many flaws here, except for that this project could be considered overkill in terms of Marc only recording Queen songs within the last couple of years; and even then it’s only a nit pick as even now Marc’s presence as a singer is so commanding and captivating that I’ve rediscovered by love for Marc singing Queen songs, and that’s a great thing indeed! Well done Marc, your intimate piano EP is top notch, and I can’t wait to see what’s next in the rest of 2020 and moving into 2021, where hopefully there is more touring once again. Maybe I will check out the rest of Marc’s solo discography… don’t you all think that’s a genius idea?

3 songs to listen to: Bohemian Rhapsody, I Want To Break Free, We Are The Champions