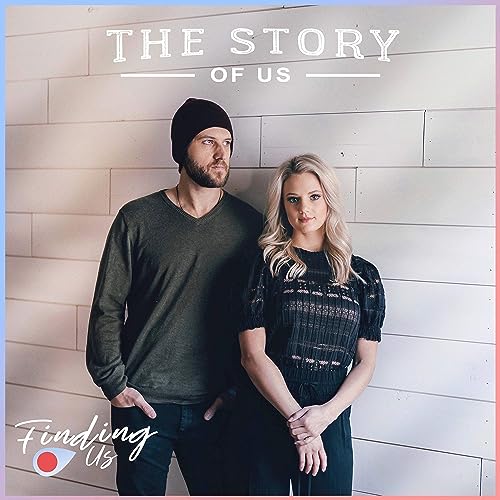 Finding Us– The Story Of Us (Amazon mp3/iTunes)

Is Anthem Lights splitting up like another popular boyband did- as in One Direction? Now you might scrunch your nose at me and wonder why I’m even surmising this seemingly preposterous idea- simply because I did in fact write about these guys being extremely influential, in one of my recent Momentous Mondays blog posts the other month. And I guess the answer to your queries is this- Spencer, Joey, Chad and Caleb (as the husband and wife duo Caleb + Kelsey) have each been pursuing solo careers alongside their popular band career… and now with the release of a brand new album The Story Of Us recently, from Finding Us (the newly formed husband and wife duo of Chad Graham and his wife Fallon); one may believe that an Anthem Lights split could be possible. It may not be liked nor loved, but it could be possible. Think about it- these guys are spreading themselves very, very thin these days- don’t you reckon something is going to give or break soon? Not to be a pessimist, but aren’t Anthem Lights’ days numbered? Well I thought so… until I realised that these guys have been juggling solo careers and a band career for practically the entire time that they’ve been a band- and they’ve more than survived! They’ve thrived! Thus I guess it stands to reason that even with the addition of the duo Finding Us in the mix…Anthem Lights will survive and will be strong- these guys rarely tour and do live concerts, as they feel like their ministry is on Youtube and on the internet, which is fine… but this means that Joey, Chad, Caleb and Spencer can probably handle way much more busyness-wise than the average pop band. And that is saying something very positive…because right now it means we’re blessed with the introduction of Chad Graham’s new group Finding Us. Comprising of Chad and his wife Fallon, Finding Us dropped The Story Of Us to digital outlets a couple of weeks ago, and even though the album is comprised entirely of covers, I for one am captivated and enamoured by the passion and heart behind this release.

Usually when artists record a cover album- and maybe even a cover album for their debut album- they cover the hit songs. The songs that have gone far on the radio, the songs that they know that listeners would want to check out because ‘it’s a smash hit and I want to hear the cover version of ___!’. Yet one glance down The Story Of Us and we see, yes some hit songs, but also some lesser known tracks that might’ve slipped underneath our radar. When you’re an artist starting out and you do a cover album- lots and lots of songs are at your disposal, and assuming that the caveat that this cover version matches the original in every aspect for every single cover, then you’ve basically got hundreds and hundreds of songs to choose from to make your album stand out from the other cover albums out there, and also maybe stand out from some original albums too. For both Chad and Fallon as a married couple, they’ve decided to go the unconventional route in which covers to choose from- they’ve chosen songs that mean something personal to them and songs that touch their soul. Not just the popular songs but the deep and meaningful ones too. Sure there are songs from Frozen 2 here (“Into The Unknown”, “Show Yourself”, “The Next Right Thing”) but there are also plenty of heartfelt ballads. “Dear God” from Hunter Hayes delves deep into asking God tons of questions and coming before Him with doubts and issues that we’re struggling with, while “I Won’t Let You Go” is as poignant as is honest, as we are treated to a sublime Switchfoot cover sung from God’s perspective, reminding us that ‘…if you could only let your guard down, you could learn to trust Me somehow, I swear, that I won’t let you go, if you could only let go your doubts, if you could just believe in me now, I swear, that I won’t let you go, I won’t let you go…there ain’t no darkness strong enough that could tear you out from My heart, there ain’t no strength that’s strong enough that could tear this love apart…’. “Homecoming Queen” from Kelsea Ballerini is a reflective and introspective ballad that relays to all of us that it’s ok to feel sad sometimes, and feel the whole spectrum of feelings that make us all human; while Chad and Fallon beautifully cover a classic love song (or friendship and mateship song) in “I Won’t Give Up” from Jason Mraz. The trio of country band Dan + Shay songs covered majestically and skilfully from the duo show us that this band is probably their favourite, as they relay to us relatable issues that we all deal with; while the pair of lesser known Sarah Reeves songs “Don’t Feel Like Fighting” and “Anxious” deal with a couple fighting and admitting that we get scared and anxious sometimes respectively- and hopefully Finding Us covering these inspirational melodies may draw some of their fans who are non-believers into exploring some more Christian melodies. And that’s always a good thing, that’s for sure.

Musically, The Story Of Us is a simple album- Chad and Fallon Graham mainly utilise the acoustic guitar and the piano- no electric guitar nor drums- creating an intimate, warm and comfortable atmosphere. Much to the disappointment of some, who probably would want to hear cover songs that are big, booming and grandiose; Chad and Fallon go down the quiet and prayerful route. And that’s a good thing, because as both husband and wife bare their soul and their heart in these 12 melodies, we are invited more into their heart for Jesus, as well as their love for music in general. And even though you may not like cover songs – or the thought of Christian artists covering mainstream songs – then I’m positive that Chad and Fallon’s weekly podcasts about the songs they’ve covered (they’ve uploaded 5 videos thus far!) will surely capture you and change your mind. So what are you guys waiting for? I know that maybe liking this alubm may mean you could be betraying Anthem Lights and your love for them… but I reckon there’s enough love and appreciation to go around. Why can’t you support the band material as well as these guys’ solo albums? Well done Chad and Fallon for a compelling debut- and let’s just hope that we can hear more original material (as a new husband/wife duo!) in the next full-length album!

3 songs to listen to: Dear God, I Won’t Let You Go, Keeping Score