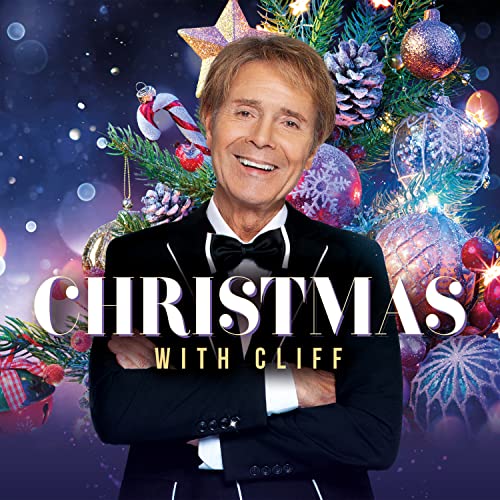 Everybody knows Cliff Richard. And I’m sure everyone loves Cliff’s music. And if you don’t know Cliff and his long-lasting influence, impact and reach throughout the last 8 decades… then I guess you’re really missing out on some very poignant, honest, moving, and vulnerable music. Known for his smash hit singles “Mistletoe And Wine”, “Wired For Sound”, “The Best Of Me”, “Saviour’s Day” and the iconic and legendary “The Millennium Prayer”; Cliff has been gracing the airwaves and our hearts for a long, long, time. We will be blogging about Cliff in 2023… but before we do, shall we talk about Cliff’s new Christmas album Christmas With Cliff? I mean, it is the Christmas period, so, I guess we should, shouldn’t we?

I have always loved being in recording studios ever since Studio 2, Abbey Road, in 1958. I recorded this album in “Criteria Studios” in Miami Florida – 4,427 miles away from Abbey Road and once again I felt that I was in a world of my own! I had the help of two producers, Sam Hollander and Chris Walden. They guided me through the “well known” Christmas songs and freed me to sing them my way. They had differing approaches to the songs that I asked them to produce for me, and they gave this album the dynamics that I had hoped for. This album is not just mine. It belongs to all of us involved in creating it and I hope that we add a little something special to your Christmas season.

This is the time to sell records. This is the right time. It felt right again. Christmas comes every year, and you could become a bore. It’s made it easier to sing about my faith. Most people don’t necessarily believe in Jesus or God, but I read books. I don’t believe it [everything I read in books], but I love it. So, if you can allow yourself to love Christmas, great. There is something about Christmas that can touch any heart – it doesn’t matter what you do or don’t believe.

To be honest, there’s only a handful of Cliff Richard songs that I know. For a career that has started in the 1950’s (159 UK singles, 22 German singles and 20 other singles), I know… probably only 5-10 songs. That’s quite shameful in my opinion- but it was really “The Millennium Prayer” that cemented my opinion that Cliff’s body of work throughout the years ensures his sustained influence across all time. And though I will personally do a deep dive into Cliff’s music next year, is there no better album to start with when listening to Cliff than his latest Christmas release? Album opener “It’s The Most Wonderful Time of the Year” is one of the most popular and probably over-played holiday songs, yet Cliff keeps this iconic melody fresh and hip, as his zeal and passion for the holiday season really shines through in the delivery of the vocals and the entire vibe of the track. A jovial and joyful track, this song truly should be a song that I loathe just because it’s been so over played; but Cliff’s rendition is solid and inspiring and moving- and gets me in the Christmas spirit immensely. “Sleigh Ride”, another hard-hitting and impacting holiday song, is a track that brings a smile to my face, as Cliff injects life, vitality, and cheer into an already instant holiday classic (though nothing can still beat Relient K’s version!); while the worshipful original melody “First Christmas” speaks about the birth of Jesus, and about how ‘…on the first Christmas, God gave a present to us, Jesus Christ, His only son who brings us peace and joy…’. It’s somewhat weird and odd hearing a ‘mainstream’ artist sing about their faith, but for Cliff and this album, hearing him sing about Jesus has been very encouraging and inspiring, particularly when his faith has been at the cornerstone of who he is as a singer and as a songwriter over the decades.

The rest of Christmas With Cliff invites us all into a worship session, as Cliff praises Jesus for being born, while also delivering his rendition of many staple holiday classics for people who may not believe in Jesus. “Joy To The World” is delivered with extreme passion and a heart for Jesus Christ, as Cliff majestically relays that Jesus is here and that we can sing praises to Him at any time; while the fun-filled and toe-tapping “Jingle Bell Rock”, in itself a nonsensical song, is a sheer joy to listen to as I’m swept away by one of the most compelling and emotive holiday songs I’ve heard- and Cliff’s rendition is not too bad either! The jazzy/R&B/gospel-tinged “Blue Christmas”, originally recorded by Elvis Presley, is recorded to near-perfection by Cliff; while the powerful and popular “When A Child Is Born” is covered exquisitely by Cliff also- and this song also essentially puts Jesus at the forefront of the holidays. “Mary, Did You Know?”, a heartfelt, reflective, and contemplative ballad is another melody centred on the divinity of Jesus Christ, and is beautifully sung here by Cliff (although I will still love versions from Pentatonix and Peter Hollens all the more!); while Cliff displays a gospel-like flair in the emotive, explosive, celebratory and declaratory “Go Tell It On The Mountain”- needtobreathe’s rendition is still the best, but as Cliff eloquently relays to us all that Jesus Christ is born- I can’t help but be inspired and resonate with this passionate and emotional rendition of one of my favourite carols ever.

“Oh Come All Ye Faithful”, essentially a worship song, is delivered with immense power and solid gravitas, with Cliff’s commanding voice relaying to us that we should sing Jesus’ praises because He is Christ The Lord; while Cliff brings back the fun into his album once again with the danceable “Rockin’ Around The Christmas Tree”. The album closer is the New Year’s Day themed “Six Days After Christmas (Happy New Year)”, with Cliff ardently and emotionally crying out that ‘…fill a cup of kindness, let it overflow, like they did before us, we all know six days after Christmas, the year comes to an end; and I choose to remember good times with good friends, and we’re all looking forward to what tomorrow brings, six days after Christmas we let the new year in…’. Yet it is the original emphatic, poignant, no-nonsense and truth-revealing “Heart Of Christmas” (no, not Matthew West’s song!) that is my favourite track on the album- as Cliff delivers a worship song for the ages, and one that could possibly be covered by Chris Tomlin or Matthew West. And as Cliff powerfully highlights that we can and should sing out ‘…holy, holy, holy night, hear the angels singing out, unto us a child is born, Jesus, the heart of Christmas, holy, holy, holy night, heaven’s bells are ringing out, Christ has come to save the world, Jesus, the heart of Christmas…’; can’t you imagine this song being declared at Passion Conferences or Hillsong Conferences?

Cliff Richard is a living legend and an icon. Simply put, there’s nothing more to be said… until my blog about him, of course! Christmas With Cliff is a joy to listen to, and it’s encouraging to see an album that glorifies Jesus- that’s still heavily promoted as a ‘mainstream’ album. And as Cliff reminds us of why he is one of the most influential artists of all time- we should all strive to be as humble and as unassuming as Cliff. With Cliff proclaiming the gospel of Jesus Christ, we remember the reason for the season; and for that, this album is a must listen. Well done Cliff, I can’t wait to dig into your discography and I also can’t wait to hear what’s on the horizon in the future!

4 songs to listen to: First Christmas, Blue Christmas, When A Child Is Born, Heart Of Christmas