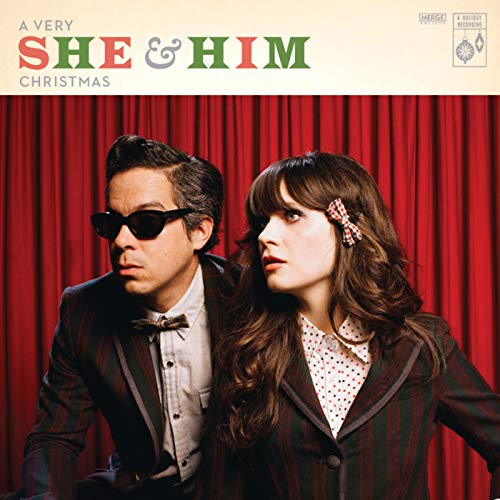 A Very She & Him Christmas

Initial thoughts: I’m not usually a fan of jazz music, but Zooey Deschanel and M. Ward have crafted a fantastic holiday album to propel us all into the spirit of Christmas. It’s not an album without flaws, but it’s a well-rounded Christmas album that is worth many listens throughout this holiday period and the upcoming years as well.

Reason to listen: If you love music similar to Norah Jones, bluesy folk/jazz style tracks, or if you want to reflect, contemplate, or ruminate upon the year this Christmas season, then A Very She & Him Christmas is definitely for you.

Reason to buy: This album is a rather ‘different’ Christmas album- there’s hardly any jovial songs, apart from “Sleigh Ride”, and even that has a jazz undertone. She & Him’s Christmas album isn’t that popular at all, and so even if you wanted to buy the album- chances are that you probably can’t because it’s not available is most stores. Is there a reason to want to buy the album though? I loved listening to this album, but I personally wouldn’t buy it, because even I can’t be immersed in jazz all day long. You all may be different, and that’s ok.

Reason to skip: If you love Christmas pop music or Christmas worship music… then this album isn’t for you and then you can skip the album with no shame. It’s that simple.

No. of originals/covers: 5 (The Christmas Waltz from Frank Sinatra, Christmas Day and Little Saint Nick from The Beach Boys, Christmas Wish from NRBQ and Blue Christmas from Elvis Presley), but nothing original from the duo.

No of guest artists: None, but Zooey Deschanel has a very captivating and powerful voice- and so this album doesn’t need any guest vocalists at all!

Does it have heart?: I’d like to think so. Zooey’s voice is incredibly captivating, and I can’t help but be immersed in the music. But since the album is full of holiday songs and covers, I can’t say for certain whether the duo is really ‘getting into’ the Christmas spirit or not.

Does it have a Christmas-y atmosphere?: It’s got a jazzy and laid-back acoustic type atmosphere. Does that count?

Uniqueness?: Not really. She & Him’s album has a personal, reflective and contemplative vibe, but the album has no bells, whistles, that typical Christmas children’s choir that appears on maybe every second Christmas album… no, She & Him’s album is rather vulnerable, honest and mellow. Sure, there are good Christmas songs here, but musically, Zooey and M. Ward aren’t reinventing the wheel of Christmas music that much.

Christmas message: Not a single bit. No mention about Jesus or the story of Him being born in a manger for us. But… what do you expect for a ‘mainstream’ jazz Christmas album?

Closing thoughts: I was pleasantly surprised with A Very She & Him Christmas, particularly because of how different it was to many other Christmas projects. Will I replay this one in a hurry? Perhaps. Only time will tell. So far though, I’ll cherry pick some songs because I don’t think listening to an album of jazz with no breaks in between, is something I’ll be doing any time soon.

3 songs to listen to: Christmas Day, I’ll Be Home For Christmas, Blue Christmas

Yes/no; why/why not?: If you like a quiet Christmas, then A Very She & Him Christmas is perfect for you. If you want something with a bit more energy, try a holiday album from for KING & COUNTRY, Chris Tomlin or Pentatonix!