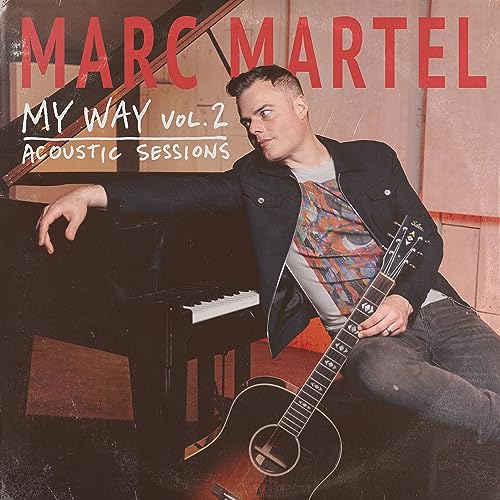 Every knows Marc Martel as ‘that guy’. The guy who sounds like Queen frontman Freddie Mercury. Maybe not everyone knows him- but if I direct you to this clip of Marc’s audition for the Queen tribute band in 2011; would you know him now? I wrote a blog about Marc at the beginning of 2020, so if you want to know more about Marc, then you can read about it in the blog. But let me tell you- while the world may know Marc for him uncanny and eerie resemblance to one of the most unique voices in music history (Freddie Mercury from Queen)- I reckon where Marc has shined the most, not just vocally but also in line with his personal beliefs, is in his Christmas albums. Sure, the Queen stuff is great and nostalgic, but when it all boils down to it, Marc is a devoted Christian, with his mission being first and foremost to make Jesus’ name famous in whatever sphere of influence he is in. With Marc having released 3 Christmas EP’s (The Silent Night, The First Noel and Christmastime Is Here) culminating in a release called The Christmas Collection in 2019; one could roll their eyes at the discovery of Marc being so devout a believer that he had to release 21 Christmas songs packaged together in one album- isn’t that overkill you might ask? Well actually I for one though love Christmas music, and would listen to holiday tunes all year long if I could; and even in Marc’s Christmas songs we hear a wide variety of musical genres. And now that I’ve got that disclaimer out of the way, let me say that Marc is a busy, busy guy- even in the pandemic. In 2020, he dropped his Christmas EP Thank God It’s Christmas as well as his 2021 Christmas EP Hark! And though I do love Christmas and Marc’s worshipful and seasonal music… now it’s time to segue back into what Marc does best! My Way, Vol. 2 (Acoustic Sessions) is a sequel to My Way released back in 2018– and with that album resonating with me greatly due to Marc’s powerful renditions and near-flawless recordings of some of the biggest songs in history; this album is no different- as it contains Marc reinventing and re-recording and beautifully releasing his spin on… some of the biggest songs in history!

Way back in 2018 when I wasn’t that cultured nor was I that savvy and aware of all of the mainstream music that’s out there- I wrote a ton about Marc’s album My Way when I didn’t even need to. I wrote about the sound of each cover, Marc’s pitch, and tone, as well as the feel and atmosphere of the songs. I wrote about things I wasn’t even qualified to write about. And so now, in 2022, with me now listening to these powerful, compelling, stirring, and resonating renditions of hit songs and well-known classics- I’ve decided to let these songs do the talking. I will always have a soft spot for Marc and I will always rate his music highly. I will always try to write about things I may be underqualified to write about. And so… how about you all listen to these songs for yourself and decide whether you like this EP, purely based on that? “Bad” (U2), “Dreams” (The Cranberries), “Hallelujah” (Leonard Cohen), “Don’t Let The Sun Go Down On Me” (Elton John), “Right Here Waiting” (Richard Marx) and “A Long December” (Counting Crows) are arguably some of the most iconic songs ever (granted, I personally don’t know “A Long December” from a bar of soap!), and to me, Marc’s interpretations of these songs are quite exquisite and almost perfect. But that’s just my opinion. As Marc continues to chow us how brilliant a singer he is, let us marvel at his craft, and hope that he will record a new album soon of original songs! He’s too brilliant for just covers, in my opinion!

With Marc Martel becoming his own person musically after splitting from Downhere and recording his new solo material, My Way, Vol. 2 (Acoustic Sessions) is a perfect reminder of  the timelessness of songs and how they can stand the test of time, and can impact us all in any year at any point in time! Marc’s EP is another great step in getting us on the contemplative mood; and so let us be blessed and amazed by this powerful and inspiring collection of songs. Well done Marc, your latest project is top notch, and I can’t wait to see what’s next in 2022 and in 2023. Maybe another all new original studio album… don’t you all think that’s a genius idea?