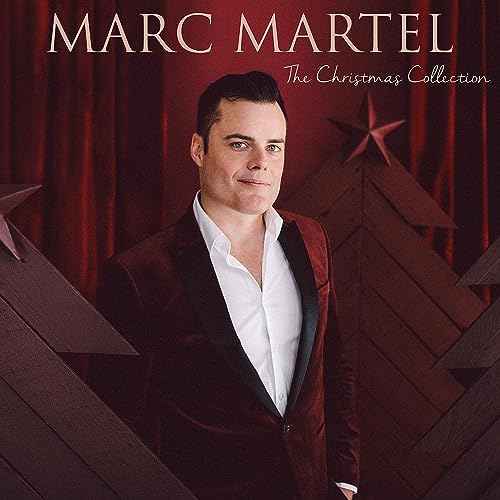 Hands up who knows Marc Martel? Anyone? Like really, really, really? I big superfan would know that his previous hits in Downhere include “The More”, “Let Me Rediscover You”, “You’re Not Alone”, “Rest”, “A Better Way” and the Christmas hit “How Many Kings”. But for the general public who aren’t fans of Downhere… how about if I say that Marc’s the guy that vocally sounds eerily and somewhat creepily like the late Freddie Mercury from Queen- even more so than Adam Lambert? How about then? The former lead singer of Christian rock band Downhere and a strong believer in Jesus; a writer of songs…yet also an uncanny resemblance to Freddie Mercury, and thus a popular entertainer and performer amongst fans, critics and casual listeners alike!

Marc Martel, originally from Downhere from the mid 2000’s to the early 2010’s, is quite the performer, having shown off his vocal chops in Downhere before. Yet since that band was marketed to Christians, the world hadn’t had the chance to hear Marc in action vocally. That was until one day in 2011 when Marc submitted his cover online of “Somebody To Love” by Queen, when band members were looking for unknown guys to form a tribute band and subsequently tour. This video went viral very quickly and had him on everyone’s radar? Ex-Queen members Roger Taylor and Brian May took notice, the general public took notice, and critics took notice. The rest is history, as Marc transitioned into ‘the guy who sings Christian music the no one knows about’, to ‘the guy who sings Queen music and pulls it off perfectly that everyone knows about’! After fronting The Queen Extravaganza for a while, Marc launched his own cover band of Queen, separate from the decisions of the remaining band members of Queen, and with their blessing too. In 2016 Marc started The Ultimate Queen Celebration, and now tours when he wants to, singing however many Queen songs he wants to- which is a lot going by public demand.

If you’ve got a talent, society says to use it or lose it. In the case of Marc Martel, his talent of sounding like Freddie Mercury has put him into a unique position. Usually the one to write most of the songs in Downhere, Marc was unconsciously placed in the unfamiliar category of being a cover artist- only singing Queen songs because the public demanded it, yet Marc still possessing and containing the gift of songwriting, wanting to bring it out to the fore. Would the public still love and accept Marc if he abandoned the Queen stuff and wrote his own music? Thunderbolt And Lightning, which released in 2018, is a compilation of some of the songs that started Marc’s incredible and remarkable solo journey, and the songs from Queen that mean the most to him. Because Marc has never recorded any Queen songs in the studio for an album/EP before; for those of us, like myself, who were intrigued every time Marc toured with his Queen band and sung songs for the masses- I reckon this EP was, and still is, for us. Not for the Queen die-hard fans or the guys who prefer Adam’s vocal chops over Marc’s. But for those of us who are interested to hear how Marc delivers these songs every night on tour and for us to marvel at what goes through his head as he delivers some of the most iconic rock songs ever to grace our radio airwaves and our music stores.

Yet for all of the prowess that Marc has delivered to us through his Queen covers; where Marc has shined the most, not just vocally but also in line with his personal beliefs, is in his Christmas albums. Sure the Queen stuff is great and nostalgic, but when it all boils down to it, Marc is a devoted Christian, with his mission being first and foremost to make Jesus’ name famous in whatever sphere of influence he is in. Originally I thought that because Marc is now recording music in the mainstream, that he wasn’t a Christian anymore (yep that was my shallow thinking back then!), and thus I was apprehensive yet still quietly eager to check out Marc’s music, But there’s good news though- Marc is still a Christian, and is now instead making music for believers as well as non-believers alike, as evidenced by his thoughtful interview with Andrew Greer. With Marc having released 3 Christmas EP’s culminating in a release called The Christmas Collection last year, one could roll their eyes at the discovery of Marc being so devout a believer that he had to release 21 Christmas songs- isn’t that overkill you might ask? Well actually I for one though love Christmas music, and would listen to holiday tunes all year long if I could; and even in Marc’s Christmas songs we hear a wide variety of musical genres. With this series this year being Christmas In July; let me briefly touch upon The Christmas Collection and remind you all why Marc is a lyrical and vocal genius, and can soften even the hardest of hearts like Ebenezer Scrooge!

In many ways, my favorite thing about Christmas is the subtlety. There are many aspects of Christmas in this song. I love Christmas because it is a time of year where you can make it as meaningful as you want, and I’m grateful we still live in a culture that allows for that. At its heart, we are celebrating the beginning of life. We are celebrating the birth of a Child, and that God made Himself a Man and could truly experience humanity so viscerally. He went through all of the range of emotions we go through, as a perfect Person, and this song boils it down to a simple way of understanding part of that story.

Having spent some time outside of CCM the past few years I’m sensitive and I make sure I’m not just preaching to the choir, but also making this life giving message completely accessible to anyone who hears it. God stepped in and did exactly the opposite of what people expected. In our fallen natures we think of justice and vengeance, and Jesus came as a baby and showed us tenderness and forgiveness.

With Marc showing us timeless classics and reimagined obscure Christmas tunes, I reckon for this upcoming Christmas season or for any Christmas season (or any time of the year for that matter- and especially now while we’re all on lockdown as we are remembering that Jesus is with us, so we need not fear of the future and of any uncertainty!), immersing yourself in Marc’s holiday music is a must. There’s the grandiose big booming epic anthemic Christmas tunes (“Mary Did You Know”, “Ave Maria”, “Hallelujah Chorus”, and “The Christmas Song”), as well as poppy and traditional adult contemporary tunes (“It’s Beginning To Look A Lot Like Christmas” with Plumb, “O Come All Ye Faithful” with Jason Gray, and the Mariah Carey cover “All I Want For Christmas”), not to mention the piano focused material (“Christmastime Is Here”, “Little Town Of Bethlehem”, “Have A Merry Little Christmas”), and the anthemic and more for KING & COUNTRY-like “Little Drummer Boy”. But who could also forget Marc’s re-recording of the original Downhere classic “How Many Kings”? However a few of the 21 tracks stand out- as far as duets go, Marc’s stirring and effortless collaboration with Plumb is gold to my ears, as they harmonise perfectly together, in this quirky holiday themed song, which is in some ways an obscure carol, one you would not expect to be covered. The subdued acoustic guitar led ballad “Mary Did You Know” featuring Buddy Greene, and the piano led “The Christmas Song” (originally covered by Nat King Cole), are also quite enthralling and stunning and deserve a special mention, as Marc emphatically relays to us in these tracks the importance of Mary knowing her child is the son of God in the former; and bringing us into the Christmas spirit, and into community with family and friends in the latter melody.

Yet in each of these holiday melodies, Marc is definitely having a blast, and definitely giving God the glory- Marc excels deeply even though genre-wise they’re all quite different, and it’s also evident that these songs are enjoyable, even if Marc doesn’t really reinvent the wheel of Christmas music. Even though I reckon that after you listen to Marc’s music you may think that his voice is too big to be ever associated with pop music or acoustic music; I tend to disagree- as I believe that if Marc does sing pop music, or any genre other than ‘his own genre’, it won’t lessen the impact of his voice, but would rather make the whole genre of pop, or whatever genre he’s singing in, better overall. Am I making sense? I hope so! Whereby “Noisy Day” and “Silver Bells” (a collaboration with Amy Grant and Michael W. Smith) are the brand new tracks especially recorded for this album, as Marc eloquently reminds us all of the gift of new life that we are given because of Jesus being born. It’s something that can be celebrated at all times of the year- not just at Christmas time; and if there’s anything that I have learnt from this album, it’s that pure, honest and emotional worship to Jesus because He is good, is something that can be undertaken, either by ourselves or in a group of people. Marc’s album The Christmas Collection facilitates this corporate/personal worship line quite well!

With Marc Martel becoming his own person musically after splitting from Downhere and recording his new solo material, The Christmas Collection is a fitting and well-timed reminder of Jesus’ coming to earth and saving us all from ourselves. This Christmas (and also this year while we’re all feeling reflective and introspective at home), instead of the hustle and the bustle, let us sit and reflect on what Jesus has done for us- and Marc’s album is a great first step in getting us on the contemplative mood. Well done Marc, your latest Christmas project is top notch, and I can’t wait to see what’s next in 2020 and 2021. Maybe I will check out the rest of Marc’s solo discography… don’t you all think that’s a genius idea?

5 songs to listen to: It’s Beginning To Look A Lot Like Christmas, O Come All Ye Faithful, How Many Kings, O Holy Night, Silver Bells