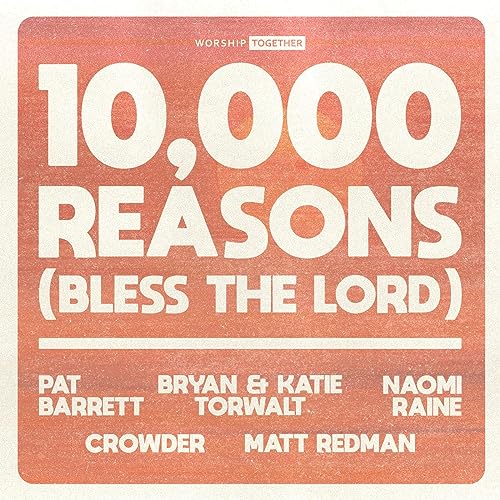 Matt Redman has been a blessing for the worship music ‘industry’ for the better part of 25 years or so, delivering songs like ‘The Father’s Song’, ‘Blessed Be Your Name’, ‘Once Again’, ‘You Never Let Go’, ‘Never Once’, ‘Let Everything That Has Breath’, ‘A Greater Song’, ‘Yes and Amen’, ‘All Over the World’ and ‘Lord, Let Your Glory Fall’, to name a few. He, alongside other of his contemporaries like Delirious?, Paul Baloche, Chris Tomlin & Tim Hughes, changed the landscape of worship music as we know it, and now in 2022, we’re feeling the great, powerful impact of Matt’s songwriting, all these years later. While Matt and his music isn’t as popular now (thank Bethel and Elevation Worship for that), that doesn’t mean that Matt’s music is dead and buried, as seen in this new release from the global website WorshipTogether.com. Ten years since the unveiling of quite possibly Matt’s most popular song ever, several artists have come together (Pat Barrett, Bryan & Katie Torwalt, Naomi Raine & Crowder) to create a unique rendition of an already powerful song. Still featuring Matt Redman himself as well, comes the new rendition of the already-classic song, ’10,000 Reasons’, a song that has definitely stood the test of time and has become a ‘modern hymn’, just like the song ‘In Christ Alone’ before it.

There’s not that much to say about ’10,000 Reasons’. People have been discussing the song for the better part of 10 years, and so me adding anything to the discussion, will be in fact, me, adding to the noise of it all. So what I will say is this- ’10,000 Reasons’ is a tremendous blessing, to me, my family, people around the world, and whole landscape which is worship music, full stop. Matt’s highest-charting song has become a global phenomenon just like how Chris Tomlin’s song ‘How Great is our God’ has since that track was unveiled in 2004…till now. Since unveiling ‘10000 Reasons’ way back in 2011, I’m not even sure that Matt himself thought the track would be as big as it has been, but here we are, 11 years later, and we see a song that has impacted so much, reminding us that sometimes a song can just come in and change the landscape of everything that we know about worship (or even more broadly, about Christian music as a whole). And that is a good thing. ’10,000 Reasons’ as the legacy it leaves is far greater than the legacy of maybe even Matt himself, and that’s ok. ‘10000 Reasons’ redone is a great way for other people who may not have heard Matt’s original version, to still hear a perfectly powerful and compelling song, done in such a way where their own favourite worship artists of now, are creating something so pure, powerful, and timeless. Naomi Raine is just starting to become popular because of Maverick City Music, while Bryan and Katie Torwalt have always been relatively popular, because of their involvement in Bethel Music. And then Crowder’s just…well, Crowder, need I explain it more? Pat Barrett is still relatively new to the industry in comparison (his songs like ‘Good, Good Father’, ‘New Horizons (The Way)’, ‘Canvas And Clay’ and ‘Morning By Morning (I Will Trust)’ stand out over the years)…so for a collaboration to involve all these artists, on a song equally profound and iconic, is nothing short of enjoyable, emotional and encouraging. A song that will continue to stand the test of time for decades to come, this is a testament to the power of a song, and how songs can even transcend the artist singing them…and that’s ok. Well done Matt for writing ’10,000 Reasons’, indeed one of my favourite worship songs I’ve heard this past decade, no question. Here’s to maybe another song written by yourself to be as powerful and impactful as ’10,000 Reasons’, as we revisit it all, in a decade’s time? Maybe…one can only hope, and time will tell. Till then, let’s ‘…bless the Lord, oh my soul, oh my soul, worship His holy name, sing like never before, oh my soul, I’ll worship His holy name…’