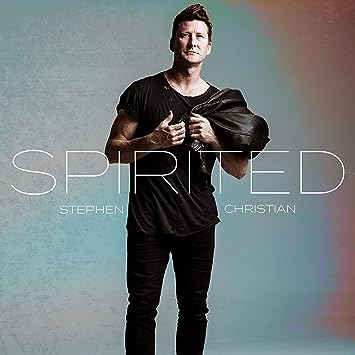 If you have never known who Stephen Christian is until now, then you definitely have to check out his music pronto (inclusive of his band Battledrums’ debut album). The former front man of the now disbanded popular mainstream rock group Anberlin, and founder of side project Anchor & Braille, Stephen, signed to BEC Recordings, and a full time worship music leader in Albuquerque, unveiled his debut solo album Wildfires in 2017. We reviewed the project here, and though I hadn’t (and still haven’t) heard any of Anberlin’s discography (is that shame on me? Maybe… I should listen to them, shouldn’t I?); I think that it’s still fair and valid to state that Anberlin was one of the most popular and influential rock bands over the past decade. They’re actually one of the near misses on Jon’s and my influential artists of all time list and blog series.

For many die-hard fans of the band, I’m sure they were in shock when Anberlin disbanded in 2014. Stephen’s vocals, similar to Marc Martel of downhere, as well as Kevin Max, are very distinct and unique; and to never hear them again would have been a travesty. Even after listening to Wildfires plenty of times in 2017, and Stephen’s latest album Spirited a number of times four years later; I can conclude that Stephen’s voice is special and deserves to be listened to and appreciated, even if you are not a Christian or not. Yes, though Anberlin is a mainstream band (not all of the members are Christian!), Wildfires is a worship album, chronicling the events from 2014 onwards in Stephen’s life that God was moving and orchestrating. The end result, was 10 inspiring, emotional and honest songs sure to impact even the most hardened hearts, in my opinion. Fast forward to now, and here we are, ready to hear another worship album from Stephen. Spirited is an album for the church, full of worship songs and songs that are enriching and uplifting for the soul. And so, should listeners and fans of Anberlin take a chance on Stephen’s latest worship project Spirited? Take a listen and decide for yourself. I undoubtedly do reckon that anyone will be blessed by listening to Spirited regardless of what you believe; but you can read my thoughts below as well!

When what we see in the natural looks bleak, and when the world tells us everything is hopeless, we have a different perspective. What we can’t see is more powerful than what we can, we serve a huge God who changes lives, circumstances, and even eternal trajectories. For those who hold steady to the faith, there’s a new revival, there will be signs and miracles, they will see life from death and hearts resurrect because He is the King of impossible.

The lead single and album opener “King Of Impossible” dropped to digital retailers earlier this year, and as a worship song, and a single, it’s pretty good. Stephen’s distinct, powerful, emotional and explosive vocals are on full display here, as he fervently outlines his joy and his love for Jesus- the King of the impossible. With Stephen highlighting the fact that Jesus is King over everything, and that He alone is worthy of our praise; this eloquent and inspiring worship anthem is fit for Sunday mornings at church, and is a welcome track to sing praises to God to. In “King Of Impossible”, Stephen looks to God, rather than the circumstances around him. And as he cries out ‘…I believe there’s a new revival, signs and miracles, life from death as hearts resurrect, You’re the King of impossible…’, we are gently reminded of the sovereignty of God, and his unending faithfulness, and the fact that He is always moving, even when we can’t see it. Well done Stephen for a comforting melody about the fact that God is sovereign and He is the King.

The rest of the nine worship anthems are thematically similar to “King Of Impossible”, and that’s definitely a good thing, as we are time and time again encouraged by the notion of God being by our side always, and are also encouraged by the truth of God loving us infinitely. “Oh The Mercy” is a heart-warming and comforting ballad, that speaks about the unending mercy that God showers over us, and the realisation that we come to once we grasp the enormity of what Jesus has done for us. He loved us while we were still sinners, He died and rose to life for each of us even when some of us would deny Him outright, He’s always with us and will never leave us, even when we reject him… that’s true love and devotion right there, don’t you think? And as Stephen outlines in great detail through a prayer to God, ‘…You’ve covered all of my mistakes before a single one was made, with open arms You took my place and gave me freedom, before I ever wore a chain, You broke the power of the grave, and You are not surprised, Jesus, that’s the reason why You gave your life…’, I am impressed at Stephen’s vocal ability, but more than that- I’m equally impressed by the gospel being preached and the simplicity of it. Jesus died. Jesus rose again. All because Jesus loves each of us. We are now His sons and daughters. We just need to simply believe and live a life in service to the One who took our place on the cross. Enough said. What a powerful and inspiring anthem that is one of my favourite songs from Stephen ever. “Call/Run” follows on from “Oh The Mercy” and is thematically similar to Delirious?’s “Here I Am Send Me”, with the pop melody diving deep into the notion of us all obeying God wherever He leads us, simply because we love Him and He loves us; while “Awaken” is an outright worship song that is rocky in nature, and vibrantly and earnestly asks God to awaken our hearts and our souls, as ‘…we are desperate for a living God, lift every burden, carry our burdens, let the rhythms of Your grace abound, the sound of surrender louder than ever, winds of change are blowing through, there’s revival when You move…’.

“I Can Do all Things”, a solid rock anthem inspired by Philippians 4:13, has Stephen emphatically declaring to God that ‘…I could walk through the fire, I could slay all my giants, I could stand through the trials, all because of the power on which You walked on the water, You forgave every sinner, You give hope for the future, all because of the power I can do all things…’, and admitting that with God, everything is possible. “All Of You” is another inspiring and hard-hitting melody, and a track that is as honest, vulnerable and emotional, as Stephen sings out that he needs more of Jesus and wants to go deeper and deeper in life with Him; while the poppy, EDM/dance “Salvation Song” is potentially one of the most musically ‘blah’ songs on this album, although it’s still lyrically quite strong and relays the gospel quite well, outlining a testimony like ‘salvation’ type of song, and including a paraphrasing of John 3:16 and Isaiah 53:4-5.

Probably my favourite song on Spirited is the powerful, emotional and honest piano ballad “Beautiful Mystery”, and together with guest vocalist Sarah Reeves, Stephen delivers one of the most encouraging worship songs of the year. As Stephen and Sarah together deliver an anthem for the ages, we are met with a song where we can worship God in awe for the beautiful mysteries He displays for all of us to see; while “Come And Worship”, another lyrically biblically based worship melody, is another encouraging and inspiring melody, as Stephen confidently outlines to us the truth of who God is, that we can ‘…come and worship, there is freedom from all our sin, in His presence there is hope again, for He reaches for the humble heart, He is faithful…’. Spirited then ends with the humble, eloquent prayer “Echo”, whereby Stephen asks to be an echo and a reflection of who God is- similar in theme to “Be The Moon” from Chris Tomlin; as Stephen asks to point to Jesus in everything that he does.

Spirited is a reference to my childhood, as someone who constantly struggled with ADHD ‘spirited’ was the polite term they used. As I got older I found being hyperactive and full of energy only worked out for my benefit, I harnessed it to pursue my passions and dreams. It allowed me to run hard after things I wanted in this life and to run even harder after the things of God.

This record will stand out in the midst of the others because this truly is an overflow of my heart, I want to seek God with all my heart, soul, and mind with everything inside of me. With all of my energy, unbridled. This record is dedicated to those who are full of energy and life, run with me!

Stephen Christian’s journey from rock band front man to worship leader, worship pastor and solo artist, is quite remarkable, and could only be described as God working and being faithful and keeping His promises. As a debut album, Stephen Christian’s Wildfires is quite remarkable, and is well worth the listen. As a sophomore album Spirited matches the effort of Wildfires and is a worthy follow-up. For both Anberlin lovers and non-Anberlin lovers alike. Or for people like me, who hadn’t for one reason or another, listened to Anberlin. Maybe I will in the future. That’s not the point though. The point is that Stephen now has more of a platform to spread the gospel now, now that his rock band days are seemingly over. So, what Stephen does with his solo career is now up to him. But one thing is for sure- he will continue to make Jesus’ name renown, and will continue to make worship albums like Spirited. And if you are unsure of the faith element if you aren’t a Christian, but love Anberlin; I say give this a chance. Stephen’s much-loved vocals will speak to you, I’m certain of that; and will reveal to you something about yourself that you may not already know. Well done Stephen for a well thought out album that will be on repeat in the foreseeable future!

3 songs to listen to: Oh The Mercy, All Of You, Beautiful Mystery