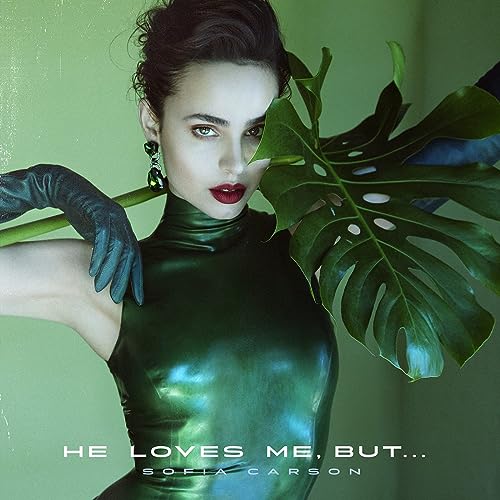 Sofia Carson– He Loves Me But… (Single) (Amazon mp3/iTunes)

If there’s one thing that I know, it’s that 2020 has been the year for surprises. There’s no denying that at the start of the year last year, we all couldn’t have expected that we’d be in lockdown, quarantining, that most things like movies and music would have to be put on hold… yet here we are right now- still stuck at home for some of us. For me though, while the past year has been tough; one such surprise that I have been grateful for is my introduction to up-and-coming pop singer Sofia Carson– her impacting and hopeful constant release of singles, and her relatable and powerful roles in each of her films. A triple threat in her own right (singer, actor, dancer!), I first heard about Sofia probably about in October 2020, when the song “Guess I’m A Liar” released. I don’t know what I was doing one day, but going to youtube.com and having a look, resulting in YouTube recommending me her video for “Guess I’m A Liar” in my feed.

I paid no attention- simply because I was under the impression that Sofia was just another pop star; and then it was later a couple of weeks later that my paths crossed with her music yet again- my brother and I watched the entire 3 movies of The Descendants (you can read my review here!)… and guess what? Yep, it was Sofia’s performance in these movies (acting-wise and her singing ability!) that resonated with me and captivated my attention. After watching another one of Sofia’s movies (Feel The Beat) and then me consciously exploring her discography and her singles such as “Back To Beautiful”, “Love Is The Name”, “I Luv U”, “Miss U More Than U Know”, “Different World” and “Ins And Outs”; I found myself more and more inspired and encouraged by her music. Sofia is an artist that the world doesn’t know that well- simply because she hasn’t released a full-length album yet. But as God has put things in my place for me to be more familiar with her music, and for me to enjoy her music… so too will he draw Sofia’s music to others. The more I listened, the more I wanted to tell others about this young woman who is changing the world through her music, her movies and her sheer optimism and positivity. Hence my ‘review’ of sorts… of Sofia’s latest song “He Loves Me But…”.

If you want to know more about Sofia and her upbringing, then google is your friend, as well as Wikipedia, and my reviews of Feel The Beat and The Descendants. I also reviewed her songs “Guess I’m A Liar” and “Hold On To Me” here; and “Fool’s Gold” here. Jon also plans to blog about Sofia in a future Momentous Mondays blog post– so stay tuned for that. And now that we’re all up to date on all things Sofia Carson, now here we are… with my ramblings- and now comes my ‘analysis’ of sorts of what “He Loves Me But” is all about. With “He Loves Me But” being only 2 minutes 30 seconds in duration, Sofia makes up for the short duration with passion, intensity and a thought-provoking message. As Sofia fervently relays to us her frustrations with a guy and how he says he loves her but then seems noncommittal and disinterested, we are met with someone who is only half-invested in the relationship. Someone who says one thing with their words but acts another way with their actions. And this is someone who needs to be removed from your life very quickly, no matter if they object or cry crocodile tears. And though this song is about a relationship presumably, I reckon it can be applicable to any toxic relationship- platonic ‘friendships’ as well. The song title seems to be the persona rationalising why they are staying with the other person- and this track, though brief, lets us to dwell upon why we make the decisions we do, and are they healthy for us in the long run. Do we need to be in a relationship to appreciate this song? No, no we don’t; and Sofia beautifully encapsulates the notion that we need to find someone who is just as passionate and ‘all-in’ as we are. If we don’t, and we then settle; then things could end in disaster. Take “He Loves Me But” as a warning of sorts.

Sofia Carson isn’t that well known in the music industry. But with “He Loves Me But”, “Fool’s Gold”, “Hold Onto Me” and “Guess I’m A Liar”, she will undoubtedly be in 2021. Sofia has also released her new movie Songbird with KJ Apa in December last year, and she has also signed on to the movie Purple Hearts– she’s also slated to write and perform on the film’s soundtrack also. With a debut full length album presumably releasing in 2021 (but could be in 2022?)- sky’s the limit for this inspirational and humble young woman who no doubt will be popular, but will also inspire us all to live the best lives that we can. So as we end the first half of 2021, what better way to end it than to listen to “He Loves Me But”? What do you guys reckon? Well done Sofia, I can’t wait to hear what it next for you in 2021!