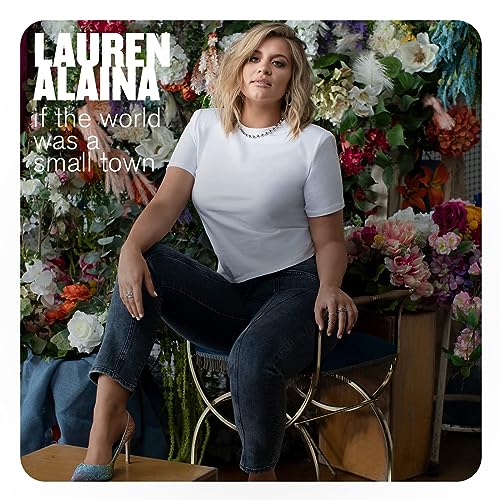 One of the most vulnerable, emotional and honest artists I have heard of late is rising country singer Lauren Alaina. One of the first artists I had heard who wasn’t recording music for the Christian music market (aside from Carrie Underwood); it’s only over the past couple of years that I’ve come to realise that God’s name can be glorified and that I myself can be inspired, encouraged and influenced by other types of mainstream music. My brother Jon has expounded upon this fact in his blog series Momentous Mondays– and he himself has expanded his musical tastes and genres- and as I expanded upon my musical tastes as well, I have discovered a world beyond Christian music, and the same heart and soul that God undoubtedly uses to bring us all closer to Himself.

I’d originally heard about Lauren’s music from both the singles “Getting Good” and “The Other Side” appearing in both my ‘Daily Mix’ and my ‘Release Radar’ on my Spotify playlists at some point in 2019. At first I glossed over these tracks, but since then I’ve had time to just take a chance and immerse myself in who I reckon is country’s best secret at the moment; and I can now safely and confidently say that Lauren is a force to be reckoned with and she sure is going to impact many people in the coming weeks, months and years. I’ve written a blog about Lauren last year (which you all can read about here); while I’ve also reviewed her EP Getting Good and Getting Over Him. One of my favourite vocalists of late, Lauren has also impressed me with her most recent single “If The World Was A Small Town”; so while you read about Lauren and her story in my blog and my previous reviews; let me dive deep into Lauren’s latest offering, and remind you all why Lauren’s music is one of the most impacting and inspiring I’ve heard in a long time!

Released last week, “If The World Was A Small Town” is musically quite country, with guitars and fiddles and things like that- and lyrically plays it safe a bit- as Lauren sings about her love for her small town back home, and sings about staying in that town, growing up there, and getting married and having kids there in another life. Yet this song is a hypothetical, and speaks about if the whole world was a small town. Lauren is singing about what she would do and how she would live in that small town if that were the case- if she never ventured out into the city and pursued music. A sort of ‘sliding doors’-esque song; this melody gets us thinking and pondering over what ifs… and then letting us remember that stressing over wouldas, couldas, shouldas are pointless. Instead, we should look to the future. Of course, it’s good and safe to live in a stay in the small town, the bubble that we are presented with. But Lauren also reminds us that she is a risk taker, and her curiosity means that she wants to see what’s out there. This song isn’t a bad song bagging the towns that you may have grown up in; but rather reminds us all that there’s a world out there that bigger than our own. Is it a good thing to want to explore the outside world like The Truman Show? Yes, of course I believe. And let’s leave this song at that, because I believe there are so many layers to this track.

I personally haven’t extensively heard Lauren Alaina’s debut album in 2011 nor her sophomore album Road Less Travelled; but I had heard enough though for me to blog about her. Though listening to “If The World Was A Small Town” recently makes me want to revisit Lauren’s discography for real, as it’s just so good! Me not being super familiar with Lauren’s albums and songs is indeed a travesty and needs to be remedied quickly. You guys however may not agree that Lauren’s music is anything special, and that’s more than ok. However, let us check out this song and her previous EPs at least (and then work backwards through Lauren’s discography!) before final decisions are to be made as to whether to invest time and energy into an artist who may or may not resonate with you. Personally though, these songs are great, and they’ve helped me be encouraged and inspired about life in general. So once again, as we wait for Lauren’s third full length album to release (which could be the track listing of both 2020 EP’s, mixed around with a few new tracks added!); it’s time to check out Lauren’s latest single, as well as both Getting Good and Getting Over Him; I promise you, you won’t regret the decision. Well done Lauren, I can’t wait for your next full length album and to see what is next for you!