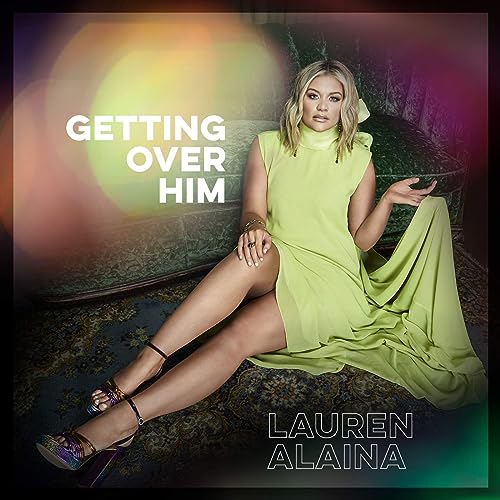 Lauren Alaina– Getting Over Him (Amazon mp3/iTunes)

One of the most vulnerable, emotional and honest artists I have heard of late is rising country singer Lauren Alaina. One of the first artists I had heard who wasn’t recording music for the Christian music market; it’s only over the past couple of years that I’ve come to realise that God’s name can be glorified and that I myself can be inspired, encouraged and influenced by other types of mainstream music. My brother Jon has expounded upon this fact in his blog series Momentous Mondays– and he himself has expanded his musical tastes and genres- and as I expanded upon my musical tastes as well, I have discovered a world beyond Christian music, and the same heart and soul that God undoubtedly uses to bring us all closer to Himself.

I’d originally heard about Lauren’s music from both the singles “Getting Good” and “The Other Side” appearing in both my ‘Daily Mix’ and my ‘Release Radar’ on my Spotify playlists at some point in 2019. At first I glossed over these tracks, but since then I’ve had time to just take a chance and immerse myself in who I reckon is country’s best secret at the moment; and I can now safely and confidently say that Lauren is a force to be reckoned with and she sure is going to impact many people in the coming weeks and months. I’ve written a blog about Lauren a few months ago (which you all can read about here); while I’ve also reviewed her EP Getting Good. One of my favourite vocalists of late, Lauren has also impressed me with her most recent EP Getting Over Him; so while you read about Lauren and her story in my blog and my previous review, let me dive deep into the latest batch of 6 songs, and remind you all why Lauren’s music is one of the most impacting and inspiring I’ve heard in a long time!

Opening the track list is the poignant and hopeful piano prominent ballad “Run”. Driven by stirring keys and a chilled relaxing atmosphere in the verses, the chorus packs a punch of energy and relays a hopeful message- as we go through life facing all of its ups and downs, we are reminded to live with purpose and to ‘run’ with determination after the things we want. As Lauren relays to us that running and pressing forward is what we were made to do, “Run” makes us realise that without moving forward and without a goal, we can just drift along and meander- and that’s no way to go about living life. We’re not really living then- we’re participating, and it is this song that can be one of the catalysts of us stepping forward out in faith and taking a risk. “If I Were A Beer” is next, and is catchy, yet most of the references to beer go over my head- because I for one am not a beer drinker. Yet the message of standing up for yourself and never letting anyone walk all over you is prominent here, particularly as I reckon this song is about Lauren’s ex and comedian John Crist and his sex addiction. “Bar Back” is another ‘break up’ or ‘revenge’ song, as Lauren sings to John (presumably) and says that she doesn’t want to see him in ‘her’ bar. Is this song  a metaphor or literal? We’re not sure, but given the way that John has hurt Lauren… well, she’s very entitled to say that he can’t come into her bar. Or at least not when she’s around. And as a metaphor, this track reminds us that our actions, whether stupid or juvenile or calculative or cunning, has consequences, and we’d better be ready to deal with them when the time comes!

“Getting Over Him” is a fun, flirty, toetapping pop number, featuring Jon Pardi on guest vocals, and also deals with Lauren’s breakup with John, and explicitly relays that she needs a ‘getting over him’ guy, while also reminding us that healing from a broken relationship also takes time; while the poppy “Seen You In Your Hometown” delves into the topic of judging people based on preconceptions, with Lauren fervently declaring that ‘…I know you get a little bit rowdy, but you’re different in your daddy’s county, my friends say that boys like you ain’t ever gonna settle down, but they ain’t seen you, seen you in your hometown…’, reminding us all that people can really surprise us in a good way when they show they’re true colours. Of course the song could be about the reverse- why is this person a two faced snake?- yet either way is a hard hitting interpretation. The EP ends with the emotional piano led ballad “What Do You Think Of?”, one of the standouts on this release, as Lauren teams up with Lukas Graham to deliver a soulful melody about wondering what a significant other thanks of you when they think about you. The track may feel a bit emotional and maybe it’s a tad demanding to ask the other person what they think of… yet this is a song that needs to be sung as we allow ourselves to have open communication between the parties, as that is a key foundation to any long lasting relationship.

I personally haven’t extensively heard Lauren Alaina’s debut album in 2011 nor her sophomore album Road Less Travelled; I had heard enough though for me to blog about her, but listening to Getting Over Him recently makes me want to revisit Lauren’s discography, as it’s just so good! Me not being super familiar with Lauren’s albums and songs is indeed a travesty and needs to be remedied quickly. You guys however may not agree that Lauren’s music is anything special, and that’s more than ok. However, let us check out this EP at least (and then work backwards through Lauren’s discography!) before final decisions are to be made as to whether to invest time and energy into an artist who may or may not resonate with you. Personally though, these songs are great, and they’ve helped me be encouraged and inspired about life in general. So once again, as we wait for Lauren’s third full length album to release (which could be the track listing of both 2020 EP’s, mixed around with a few new tracks added!); it’s time to check out both Getting Good and Getting Over Him; I promise you, you won’t regret the decision. Well done Lauren, I can’t wait for your next full length album and to see what is next for you!

3 songs to listen to: Run, Seen You In Your Hometown, What Do you Think Of?