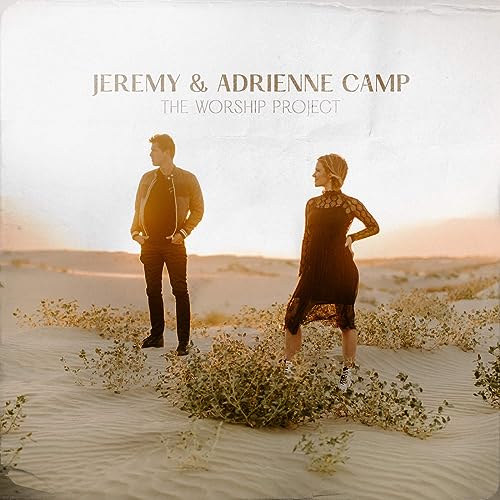 Jeremy Camp is a very polarising artist, to put it bluntly. Some listeners love him and others do not. Yet at this current point in time though, I would have to say that Jeremy Camp is one of today’s most popular, respected and prolific CCM male vocalists and solo artists (alongside Matthew West, Steven Curtis Chapman, Danny Gokey, TobyMac, and Brandon Heath, in my humble opinion)- with Jeremy’s prowess as a singer and as a songwriter only set to increase in the coming weeks and months. I Still Believe, an autobiographical movie based on Jeremy’s life, starring KJ Apa, Gary Sinise, Shania Twain, Britt Robertson, Melissa Roxborough and Nathan Parsons, just released in the cinemas in March, and on DVD in June, and this is a movie that I have loved and that I have been greatly encouraged by- a review is coming soon, I promise!; and with Jeremy’s latest album The Story’s Not Over having just been released as a deluxe version, Jeremy’s life seems to be quite inspiring and encouraging at the moment. But with Jeremy having lost his first wife in 2001 to ovarian cancer, and later on the death of his child through a miscarriage with his second wife Adie Camp; Jeremy hasn’t had the easiest road to stardom. Yet like Jesus being faithful to those who trust in His promises, He continues to shine His face on Jeremy.

However, here is the unfortunate news. That no matter how many hits Jeremy has continued to release- from “Reckless”, “Dead Man Walking”, “The Way”, “Come Alive”, “My God”, “Christ In Me”, “Word Of Life”, “The Answer”, “Same Power”, “Keep Me In The Moment” and “He Knows”; nothing can top the first four albums in his discography. Stay, Restored, Beyond Measure, and Speaking Louder Than Before all impressed musically, lyrically and vocally, as Jeremy walked the fine line between CCM and rock; dabbling enough in each genre to give us all four well balanced albums. Yet in my opinion The Story’s Not Over is much, much, more CCM. It’s not necessarily a bad thing- just think of Camp’s new musical direction as essentially being a ‘new’ artist, yet for lovers of Jeremy’s rockiness like when he debuted, will be severely disappointed here. Initially when I was listening to the album, I held out hope that I’d hear the Jeremy Camp of old. But I didn’t. Sure there are moments of edginess here, but it’s not really cohesive and feels like it’s edgy for the sake of it. Don’t get me wrong, The Story’s Not Over is thoroughly enjoyable. But it isn’t ‘wow’ and it isn’t a ground-breaking album, not by any means!

While I have reviewed The Story’s Not Over and Jon has reviewed The Story’s Not Over Deluxe Edition; Jeremy is back with something a little different. Teaming up with wife Adrienne, Jeremy has released a short but hopeful and worshipful EP titled the Worship Project EP. A sort of spiritual sequel to 2010’s We Cry Out: The Worship Project, we are met with a collection of earnest, poignant and resonating worshipful melodies, presumable designed to lift our spirits in the wake of the hardest moments of COVID-19. And believe you me- we all need encouraging to the nth degree nowadays! Still not as rocky as Jeremy’s previous albums, and his predecessors and contemporaries in music artist-wise; The Worship Project is nonetheless an honest and personal examination into our emotions and feelings at this time, directing them to God and asking Him the hard questions. While we all have gone through hell during this time, here’s hoping that this EP can provide comfort and maybe healing, as we begin to navigate a world where social distancing and zoom meetings are more of the norm than not.

Opening the track list is the powerful and compelling “Your Way Yahweh”. Typically standard Sunday morning worship service material, the opener is nonetheless earnest, honest and emotional, as both Jeremy and Adrienne passionately and fervently relay to Jesus, asking Him to ‘…purify our hearts, teach us how to walk in Your way, Yahweh, more of who You are, tear down every wall in Your way, Yahweh…’, a sentiment that we all can eloquently declare also as we lift Jesus’ name on High despite the uncertainty of our circumstances. “We Turn Our Eyes” is next, and though musically isn’t anything to be ‘wowed’ by, features the pristine and flawless vocals of Adrienne leading the track, as both husband and wife passionately relay the fact that they can and will turn their eyes to Jesus, even on the most difficult day, in the most difficult hour. “Death Has No Power” is the midpoint of the album, and is my favourite track on this EP, as this potential modern hymn is strong lyrically, in terms of biblical theology, as the duo ardently sing out that death doesn’t have a hold of us anymore, because of Jesus conquering the grave.

Simplistic in its musical delivery, “Father I Thank You” is a serene moment of unbridled thanks and gratitude, and is another personal highlight; while lead ‘single’ “Whatever May Come”, probably the weakest song on the project. Even though the sentiment of declaring to Jesus that whatever comes He will be with us always, rings true; the fact of the matter is that there are other engaging songs about this very same concept, namely “He Is With Us” by Love & The Outcome, and even “Right Here” from Jeremy himself! The Worship Project EP then ends with the Covenant Worship cover “Isn’t The Name”- one of the most encouraging worship songs I’ve heard in recent memory. As an EP, the release isn’t the most ground-breaking, but in terms of us being able to worship in the midst of our trials and tribulations, well I reckon it fulfils that role pretty well!

Jeremy Camp has come a long way since recording Stay 15 years ago. But for those of you who are not fans of his music anymore because of the gradual but nevertheless evident move away from his original genre; let me remind you all that artists are allowed to change their style, and artists are allowed to grow and evolve. This most recent EP The Worship Project was worship through and through, but if that doesn’t tickle your fancy, then The Story’s Not Over has shades of I Will Follow and Beyond Measure throughout, so I guess one can be excited if you haven’t listened to the album yet. But here’s the crux of matter. What if Jeremy decides that ‘full on rock songs’ aren’t for him anymore? What then? My point is (and I’m guilty of this as well!) that we crucify artists as much as we praise them, when they seem to make a ‘mistake’, when they do not reach the standards we make for them, when it’s really something else entirely, when the ‘mistake’ is in fact intentional. So before I sign and let you all debate about Jeremy’s musical direction, and lament about other artists whom you feel are ‘selling out’; let me ask you this. If Jeremy does decide to do worship or CCM full time and never go back to rock, are you going to demand that he must return to his roots, even if he feels God moving him elsewhere musically? If anything, you all need to listen to The Worship EP just so that you can put things in perspective. The main objective that I find Christian artists need to achieve is to point to Jesus and to provide encouragement and inspiration. Whether this is done through worship or pop or rock or rap, or country like Chris Tomlin’s most recent album, who are we to say that that’s not a valid expression of giving glory to God? Maybe we should all listen to (and maybe re-listen to) this EP as well as The Story’s Not Over and The Answer and other previous albums before we make a quick judgement! I myself think that The Worship EP is thoroughly enjoyable, and it does help facilitate a worship experience between God and myself. And a bonus is that we get to hear Adrienne Camp’s powerful vocals after all these years! You may not find that his release resonates with you, but that doesn’t mean that anyone else won’t be blessed and inspired!

3 songs to listen to: Death Has No Power, Father I Thank You, Isn’t The Name