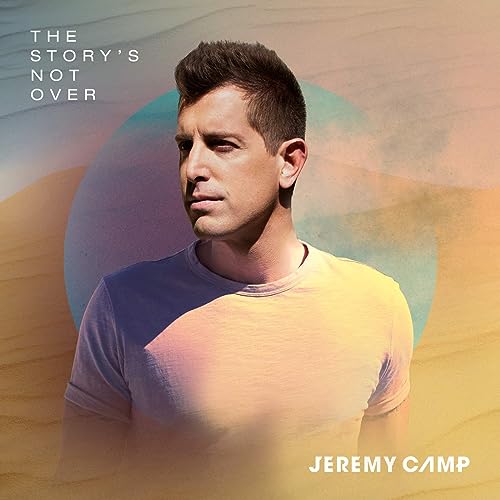 Jeremy Camp– The Story’s Not Over (Amazon mp3/iTunes)

At this current point in time, I would have to say that Jeremy Camp is one of today’s most popular, respected and prolific CCM male vocalists and solo artists (alongside Matthew West, Steven Curtis Chapman, Danny Gokey, TobyMac, and Brandon Heath, in my humble opinion)- with Jeremy’s prowess as a singer and as a songwriter only set to increase in the coming weeks and months. Given that I Still Believe, an autobiographical movie based on Jeremy’s life, starring KJ Apa, Gary Sinise, Shania Twain, Britt Robertson, Melissa Roxborough and Nathan Parsons, is in production- and a film that I am personally eagerly anticipating; as well as Jeremy’s latest album The Story’s Not Over having been released for just over two months now, Jeremy’s life seems to be quite inspiring and encouraging at the moment. But with Jeremy having lost his first wife in 2001 to ovarian cancer, and later on the death of his child through a miscarriage with his second wife Adie Camp; Jeremy hasn’t had the easiest road to stardom. Yet like Jesus being faithful to those who trust in His promises, He continues to shine His face on Jeremy.

However, here is the unfortunate news. That no matter how many hits Jeremy has continued to release- from “Reckless”, “The Way”, “Come Alive”, “My God”, “Christ In Me”, “Word Of Life”, “The Answer”, “Same Power” and “He Knows”; nothing can top the first four albums in his discography. Stay, Restored, Beyond Measure, and Speaking Louder Than Before all impressed musically, lyrically and vocally, as Jeremy walked the fine line between CCM and rock; dabbling enough in each genre to give us all four well balanced albums. Yet in my opinion The Story’s Not Over is much, much, more CCM. It’s not necessarily a bad thing- just think of Camp’s new musical direction as essentially being a ‘new’ artist, yet for lovers of Jeremy’s rockiness like when he debuted, will be severely disappointed here. Initially when I was listening to the album, I held out hope that I’d hear the Jeremy Camp of old. But I didn’t. Sure there are moments of edginess here, but it’s not really cohesive and feels like it’s edgy for the sake of it. Don’t get me wrong, The Story’s Not Over is thoroughly enjoyable. But it isn’t ‘wow’ and it isn’t a ground-breaking album, not by any means!

Just this year, Jeremy unveiled his new single “Dead Man Walking”, which isn’t a John Tibbs cover (which would have been a pretty good cover nonetheless!), but an original composition, at just 3 minutes long. Let me tell you, this song is one of the brightest spots here, but even this track has its flaws. With Jeremy trying his hand at rock and pop at the same time, and with a strong CCM atmosphere, some would say that “Dead Man Walking” is the last straw for Jeremy to travel over to CCM permanently, yet though I reckon that this track isn’t the most inventive, neither the most engaging, nor compelling in terms of being a first single; this melody I’d say is still sonically like Jeremy Camp. No, not the same Jeremy Camp who recorded Stay but the Jeremy Camp of the modern era. Sure, his sound has drastically changed. But his heart for Jesus hasn’t.

Jeremy, like Kutless, Sanctus Real, Hawk Nelson and The Afters, is a musician that has changed genres so subtly across the many years that we as listeners probably would not have noticed it until we listen to Stay– his debut 2002 album; and then now The Story’s Not Over recorded 17 years later. Throughout those 17 years, Jeremy has grown in leaps and bounds in his faith in God (he’s even become ordained as a minister!), and I guess it’s very unrealistic to expect him to stay the same musically. Previously within the genre of rock (on Stay and Restored) then transitioning to pop/rock and worship, and CCM, there are many, including my brother who were disappointed by the lack of originality in the lead single from The Answer– “Word Of Life”. We reviewed The Answer a couple of years ago; so let us examine whether this latest offering is worth the wait in every aspect!

Is it possible for a song to be half good? Like the verses exquisite but the chorus flat and uninspired? Cause that’s exactly when Jeremy has presented to us. Stellar verses followed by an unmemorable chorus. 10 points for effort here though, and there’s actually a little bit of rocking out musically- but all in all, as a first single, “Dead Man Walking” doesn’t pack the same punch as previous first singles such as “Take You Back”, “Walk By Faith”, “There Will Be A Day” or even “Let It Fade”. There’s also the small matter that the song is only 3 minutes (way, way, way too short!), and lyrically we cover ground that was covered in greater detail and much more in depth in the track’s namesake from John Tibbs, or even “Dead Man (Carry Me)” from Jars Of Clay. Yet CCM radio has eaten this song up, ensuring that is in the midst of having a looooonnnnnng stint on the airwaves. There’s no denying Jeremy’s passion though, and it’s somewhat catchier than “Word Of Life”, so at least it has that going for it.

The rest of the album has its moments but overall The Story’s Not Over isn’t that punchy, nor engaging, nor memorable. Album opener “Only You Can” is a bit more electronic than I would have liked, as the 3 minute dance number proclaims that ‘…I need to do what only You can, only You can fight for my life when fear’s got me surrounded…keep me believing when doubts got me drowning…’, which is in essentially an earnest prayer, but lyrically weak considering Jeremy’s previous singles and high quality songs; while “Still Alive” works better as a Dustin Lolli led Sanctus Real song on Unstoppable God, but is nonetheless still catchy, as this heavily radio-friendly guitar led rock-ish track encourages and inspires, relaying to us that Jesus is still with us, no matter the situation, that ‘…after all the things I’ve been through, every scar and every bruise, You remind me every time, You’re still alive…’. Both these songs are solid and hopeful in their own right, but they don’t really set the world on fire like “I Still Believe”, “Take You Back” and “There Will Be A Day” do. “Should’ve Been Me”, also another 3-minute tune, is one of the most musically out-there songs I’ve heard from Jeremy, as he once again highlights his own gratitude to Jesus, that it should’ve been him who paid the price for his own sin before Jesus stepped in; but once again, there’s not really a wow factor here. “Father”, one of the brightest parts of the whole album, showcases Jeremy at one of his most vulnerable moments, as he emotionally cries out in this ballad, that we can bring dirty secrets and our whole selves to the One who made us, simply because He is our Father and we are His children. It’s that simple, and a concept that maybe some of us have forgotten- of which Jeremy has reminded us in such a timely manner.

“Keep Me In The Moment”, is another winner here, and is such a fun song to listen to- however after learning that Matthew West co-wrote this song, I cant stop picturing Matthew singing this song himself instead of Jeremy. Imagine Matthew singing these lyrics- ‘…Oh Lord keep me in the moment, help me live with my eyes wide open ’cause I don’t wanna miss what You have for me, singing, Oh Lord show me what matters, throw away what I’m chasing after, ’cause I don’t wanna miss what You have for me…’. Here’s hoping that Matthew sings this song (and “Nobody” originally recorded by Casting Crowns) on his new album Brand New releasing in February; however as it stands, “Keep Me In The Moment” is a good song, and Jeremy does well- but I reckon Matthew might do a better job- no offence to Jeremy. “Out Of My Hands”, a solid ballad, is next, and is enjoyable, however Mallary Hope’s song of the same name and consisting of the same theme and lyrical content, is way more engaging and inspiring; while Jeremy once again musically experiments (but not to a big extent!) in the title track, as electronic music and lyrical repetition combine for a relevant yet somewhat poorly executed message of God having everything under control- in my opinion Twilla Paris (God Is In Control) and Tenth Avenue North (Control [Somehow You Want Me]) do a way better job than Jeremy at least with this subject matter of trust.

“Indestructible Soul”, Jeremy’s attempt at a rock song is actually quite enjoyable and well-produced. The subject matter and lyrics have indeed been covered before (Unbreakable by Fireflight, and Indestructible by Britt Nicole, Paul Colman and Manic Drive- 3 separate songs), yet it is the passion and enthusiasm here that keeps things fresh and invigorating. “You Don’t” switches things up with the addition of rappers Social Club Misfits on guest vocalists- yet they feel out of place on this track as they did on Stars Go Dim’s track “I Look To You”- which is a shame, because the rest of the song is pretty good. Jeremy Camp’s latest offering ends with the radio friendly CCM-like track “Wilderness” (which I predict will be a radio single one day!), and has him proclaiming the ever-true sentiment that ‘…I will rest, and trust with confidence, if You’re God in the good, in the promised land, You’ll be God, God in the wilderness…’. God is God at all times and in all situations, and once we grasp that, as Jeremy has said in this song, then we will live a more fulfilled life, I guarantee it!

Jeremy Camp has come a long way since recording Stay 15 years ago. But for those of you who are not fans of his music anymore because of the gradual but nevertheless evident move away from his original genre; let me remind you all that The Story’s Not Over has shades of I Will Follow and Beyond Measure throughout, so I guess one can be excited if you haven’t listened to the album yet. But here’s the crux of this ‘review’- what if Jeremy decides that ‘full on rock songs’ aren’t for him anymore? What then? My point is (and I’m guilty of this as well!) that we crucify artists as much as we praise them, when they seem to make a ‘mistake’, when they do not reach the standards we make for them, when it’s really something else entirely, when the ‘mistake’ is in fact intentional. So before I sign and let you all debate about Jeremy’s musical direction, and lament about other artists whom you feel are ‘selling out’; let me ask you this. If Jeremy does decide to do worship or CCM full time and never go back to rock, are you going to demand that he must return to his roots, even if he feels God moving him elsewhere musically? Maybe we should all listen to (and maybe re-listen to) this album (which isn’t perfect, but still needed in the CCM today!) as well as The Answer and other previous albums before we make a quick judgement! I may not resonate that much with The Story’s Not Over but that doesn’t mean that anyone else won’t!

3 songs to listen to: Dead Man Walking, Keep Me In The Moment, Wilderness