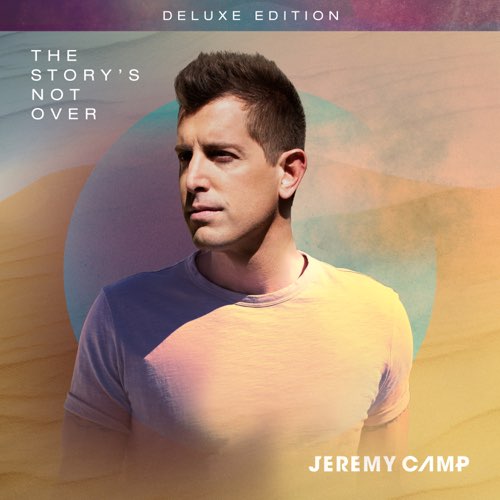 Jeremy Camp has been a seasoned veteran within the CCM/rock/pop music industry for quite some time. Releasing his first studio album Stay way back in 2002, and then releasing studio albums at a steady pace since then, he as become a mainstay on Christian radio and has given to us songs that have filled the homes and hearts of people all around the world. Yes, his musical genre has changed throughout the years, but nevertheless, no one can deny his passion and heart to see music change lives through encouragement and releasing the power of God’s love through the songs he sings and delivers. Now here we are in 2020, and upon the very carefully crafted 2019 album The Story’s Not Over, alongside the emotive and heartfelt autobiographical movie I Still Believe starring Riverdale star KJ Apa and Britt Robertson (and distributed through the Erwin Brothers, the same duo who had their hand in the powerful and emotive I Can Only Imagine a couple of years back), we see Jeremy again, this time unveiling a The Story Not’s Over: Deluxe Edition, consisting of 17 tracks, 3 of them re-recordings of earlier hits, in honour of the movie and a way to re-imagine powerful songs that have been a standout throughout his musical career thus far.

Deluxe Edition albums overall are great in terms of what each album offers for the listener. With some of my favourite deluxe-edition albums in the last few years, being albums like Revival: Deluxe Edition (Third Day), These Are the Days [Deluxe Edition] (Love & The Outcome), Hills & Valleys (Deluxe Edition) (Tauren Wells), Awake (Deluxe Edition) (Hillsong Worship) and UNITED (Deluxe) (Newsboys UNITED), to name a few; how does this ‘new’ offering from Jeremy actually hold up compared to other deluxe-edition albums, or even the standard album released last year? Well, here’s one question answered- my view of the standard album is exactly how my brother depicted and reviewed the album last year, seen here, and with a year’s passing, my thoughts on the album- at least the standard-edition part, still remains the way I thought about it before. Songs like ‘Dead Man Walking’, ‘Keep Me in this Moment’, ‘Indestructible Soul’, ‘Out of My Hands’ and ‘Should’ve Been Me’ are the bright spots on an album that isn’t necessarily that groundbreaking, or doesn’t necessarily compare and hold up, compared to his earlier discography- Stay, Restored, Beyond Measure and Speaking Louder Than Before, which are some of my favourite Jeremy Camp albums ever- and then his 2015 album I Will Follow that stands tall amongst the latter few albums of his career. And so unfortunately, the Jeremy Camp of new doesn’t really grab me and keep my attention as much as the Jeremy Camp of old did. Don’t get me wrong, there are still some great songs on every album he has done, but holistically, the albums I aforementioned- earlier on in his discography, have a much better all-roundedness that doesn’t exactly translate in his EDM/pop focused albums of today.

Nevertheless, the deluxe edition of the album actually brings a few smiles to my face- ‘Lose Control’ is one of the most emotive and poignant songs I’ve heard from Jeremy in quite some time- since ‘Heaven’s Shore (Forevermore)’ on 2017’s The Answer. ‘Lose Control’ is a reminder that the control we have been holding onto so long, leads to unresolved expectations, weary souls, and a way of life that always sees us trying to hold and juggle considerably more than we can even imagine. Control can seem like a word that we want in our lives, but realise that once we have it, we try hard to keep up the illusion that everything is under control, that we realise the better way to live, is to surrender control to God, and the freedom that comes out of it will be so much more impactful and healing to someone’s life compared to the stifiling moments that ‘control’ brings. The other new song on the deluxe edition is ‘If I Have You’, that has a cool string introduction, and continues on from the ‘control’ message in the previous track. It expounds on the understanding that when our control of situations start to fade, we start to understand that without control, there will be a large possibility that the things we may hold dear in certain situations may crumble and fall…forever. The song asks the question in a subtle and indirect way- will we still be ok and will we have everything- if we have Jesus, and nothing else, and our ‘kingdoms’ fall without any hope of them even coming back up again? Something to ponder and think about, and ‘If I Have You’, alongside ‘Lose Control’, really challenge me recently in my walk in Christ, and are standout songs, not just in this deluxe edition album, but are two of my favourite songs I’ve heard since ‘Christ in Me’ and ‘Same Power’ way back in 2015. A remix of ‘Dead Man Walking’ follows along in this deluxe edition, and while the remix itself doesn’t really add any unique musical direction to the original song, the remix does provide more of an electronic influence to the track, something that I reckon Jeremy can be venturing into in the future, and thereby, can continue to bring in fans of his new pop/EDM style music, something that I myself am very hesitant to embracing myself.

It is actually Jeremy’s renditions of fan-favourite songs ‘Walk By Faith’, ‘Right Here’ and ‘I Still Believe’ that are the true and greatest highlights of not only this deluxe album, but great songs throughout all of Jeremy’s career thus far. These renditions have been given new, fresh, and invigorating ways to be expressed to a new generation, so that songs can still have impact now and reach maybe even farther than ever before- these three songs are a great reminder of why I have loved Jeremy’s music, especially a lot of his earlier material, and why he indeed is in fact one of the most underrated CCM artists of his generation. And so this deluxe edition is made so much better with these three renditions of earlier powerful songs- and without them, I’d probably wouldn’t really buy or even stream this album, let alone check it out for review purposes. But what do I know? I’m just a reviewer. Kudos for the re-recordings though, and if you love CCM, especially pop/EDM/CCM, then yes, this album will impress. If you are more in tune to the harder rock of Jeremy’s music of years previous, then check out albums like Stay and Beyond Measure from his past. Jeremy’s music style may have changed, but his heart remains the same. Now onto listening to the earlier songs of Jeremy non-stop for the next few hours, right? Who’s with me?

3 songs to listen to: Keep Me In This Moment, I Still Believe, If I Have You