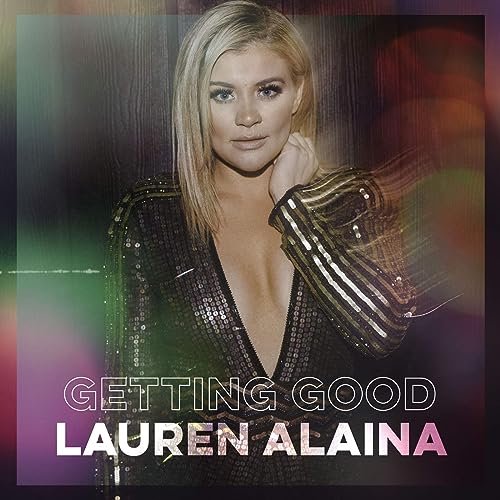 For the better part of my entire life, I’ve been immersed in Christian music. Songs that overtly praise Jesus’ name or songs about the Christian life in general. Not that that’s a bad thing, not by any means; but it’s only this year that I’ve come to realise that God’s name can be glorified and that I myself can be inspired, encouraged and influenced by other types of mainstream music. My brother Jon has expounded upon this fact in his blog series Momentous Mondays– and he himself has expanded his musical tastes and genres- so I’ll just leave that topic for him to delve into in more detail. But what I will say is that every once in a while, this year especially, a song or a couple of songs come along and have blown me away. Some by Christian artists, but some not. And in this case, with country singer/songwriter Lauren Alaina’s latest EP Getting Good; I’ve been ministered to by an artist I had no idea existed prior to this year, and by a genre that I previously would have thought to be a genre I’d steer way away from.

I’d originally heard about Lauren’s music from both the singles “Getting Good” and “The Other Side” appearing in both my ‘Daily Mix’ and my ‘Release Radar’ on my Spotify playlists at some point last year. At first I glossed over these tracks, but now that I’ve had time to just take a chance and immerse myself in who I reckon is country’s best secret at the moment; I can safely and confidently say that Lauren is a force to be reckoned with and she sure is going to impact many people in the coming weeks and months. Therefore I’m glad I chose to stick with these two songs in particular- and since the time I’ve heard about Lauren’s two songs, I’ve done some research on the heart of Lauren; and since decided to include her on my own list of 50 artists whom I think will be influential in the coming years. So for the interest of me not wanting to double up, I’ll leave me talking about Lauren’s life for another post coming next year, but what I will say is that “The Other Side” is one of the most emotional songs I’ve heard in recent memory, while “Getting Good” is probably one of the most relevant songs of the year. And when you watch Lauren’s recent testimony on Youtube; guaranteed you’ll be a fan as well!

With both “Getting Good” and “The Other Side” having this country ‘twang’ that used to be grating to my ears, but now I’m getting more and more used to; it’s hard to deny Lauren’s emotions and raw honesty here. “The Other Side” was written in response to Lauren’s stepfather’s passing, while “Getting Good” earnestly relays to us the notion that we all want to be happier ‘once we do this or that, or once we achieve this or that’, with Lauren ultimately concluding that life is already good because of our relationships and the people around us, thus we don’t need to ‘get good’. From these two songs alone, I would have to say that Lauren Alaina is quickly becoming, in my mind at least, one of today’s rising stars that we all need to pay attention to. And as for the other 4 tracks on Getting Good EP, these melodies only solidify my assertions- that Lauren’s passion and creativity will only be a positive in the future. “In My Veins” contains explosive banjo and is a high-tempo danceable track that basically details the fact that country music will always be in Lauren’s blood and veins, while “Country In Me” has Lauren singing about how a loved one or a significant other brings out the ‘country’ in her, reminding us all that her roots as a country singer and a southern girl run deep.

The laid back groovy and danceable “Somebody Else’s Problem” compares a failed relationships to a dodgy car, and while it isn’t known if Lauren is singing about an ex or not, the track does open our eyes to how we want our relationships to look like and how we want them to be. Though trading in our relationship for another if we feel like it may be drastic, sometimes letting go is all we can do when things just aren’t working out. Yet it is the satire/parody/tribute/homage or whatever you want to call “Ladies In The 90’s” that brings the biggest smile to my face, despite me not growing up listening to female 90’s singers, and not being an active fan of that type of music. Lauren brilliantly gives credit to all of the stars she has looked up to in one of the smartest songs I’ve heard in a long, long time- and when you guys watch the music video and listen to how many songs she references; you’ll be blown away too!

I personally haven’t heard Lauren Alaina’s debut album in 2011 nor her sophomore album Road Less Travelled; however that’s a travesty and needs to be remedied quickly. You guys however may not agree that Lauren’s music is anything special, and that’s more than ok. However, let us check out this EP at least (and then work backwards through Lauren’s discography!) before final decisions are to be made. Personally, these songs are great, and they’ve helped me firm up in my mind the decision of me actively listening to her music for now. So once again, as we wait for Lauren’s third full length album to release, it’s time to check out “Getting Good” or “The Other Side” or “Ladies In The 90’s” or all 6 songs! I promise you; you won’t regret the decision. Well done Lauren, I can’t wait for the rest of your album and to see what is next for you!

3 songs to listen to: Getting Good, Ladies In The 90’s, The Other Side