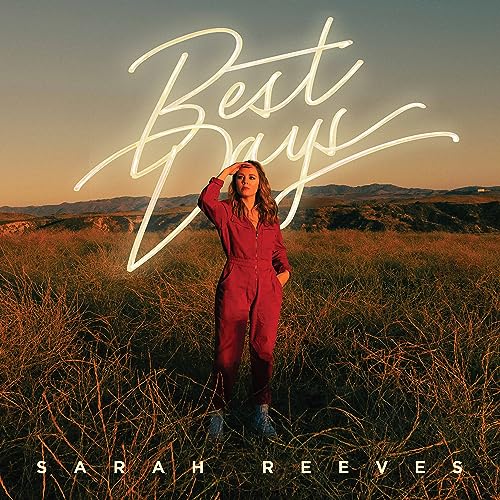 One of the more recent additions to Word Label Group is recent history, Sarah Reeves is in good company, with artists that’ve already been signed to this Christian label jugganaut being artists like Francesca Battistelli, Sidewalk Prophets, Big Daddy Weave, Stars Go Dim, Meredith Andrews, Love & the Outcome, Blanca and For King and Country, to name a few. And while now we are starting to hear and see Sarah and her music for what it is- unique, powerful, and heartfelt; she has been around the industry for quite some time. Sarah Reeves has had quite a big comeback of late- since signing to Capitol CMG around 12 years ago to release 2 EPs under that label (Sweet Sweet Sound, God of the Impossible), to going independent and releasing a full-length album (Broken Things); it was her time from 2011 till 2017 when she wasn’t pursuing music at all where I’m sure she grew a lot, in her faith and as a person. It was in 2017 where she signed again to Word Records (a different label to her initial one) that her comeback into music began. Easy Never Needed You was released after her hiatus, and that collection of songs (once released as an EP in April 2018, and again released as a set of 15 songs in October of that same year) is by far one of my favourite worshipful albums of 2018. Sarah then released her 2020 album Life Love and Madness with more of a mainstream-pop atmosphere as Sarah embarked on delivering music which is much more accessible to the general market- we reviewed the album here, along with the review for Easy Never Needed You a few years back. In mid-2021, Sarah unveiled ‘Years’, a track that was inspired by what everyone had been experiencing throughout 2020 and 2021, this past few years with the chaos that has been caused from the ongoing COVID-19 epidemic. Now here we are in October 2022, as we see another musical offering from Sarah (and in my opinion, one of the most musically powerful and impactful songs I’ve heard from Sarah in recent memory)- ‘Best Days’, unveiled in August 2022.

One of the most hopeful and positive mainstream-esque songs that Sarah herself has created in her music career thus far, this song has major crossover appeal between Christian and mainstream radio- Sarah takes the view of an optimist in her song full of hope and encouragement, as Sarah utilises her soaring vocals and her enthusiastic passion to draw listeners into a song that can hopefully be an anthem for them as well. As the song portrays a confidence in seeing the best in people’s futures, and stating that maybe, people’s best days are ahead of them (and thereby, they ought not to lose hope about their futures); Sarah poses the question- what if the best days in our lives are indeed ahead of us, and not necessarily behind us? Many people have wondered this very same thing- am I living in my twilight years, or do I have things that I can contribute towards society, or is it all undertaken behind me now and all that I have to look forward to is…reruns of Big Bang Theory? We wonder these very same things, as it relates to meaning and purpose in our own lives. ‘Best Days’ encourages us to have a more positive, fresh outlook in life, and to view situations and circumstances as opportunities for the glory of God and our flourishing, as the Lord uses whatever He knows He can, to gain our attention, and allow our lives to reflect more about Him, as we see each situation as an opportunity for glorifying His name and sharing His love with people around us.

Co-written and produced by Taylor Drévan Hill, Anton Göransson, and Isabella Sjöstrand (very famous Scandinavian producers); this marks a new era of positive and uplifting music by Sarah that can be easily accessed in both the Christian and mainstream music spheres. A song that is almost certain to be replayed on my iTunes playlists in months to come, this is a must-have if you’ve enjoyed Sarah’s music before, or if you’re a fan of similar-styled artists, like Riley Clemmons, Demi Lovato and Rachel Platten, to name a few. One of Sarah’s most upbeat and joyous songs to date; ‘Best Days’ presents this notion of our best days being not behind us, but us looking forward with anticipation of what God will do in our lives and in the lives of others, in the upcoming years ahead. We need to look forward, and ‘Best Days’ can hopefully do that. Well done Sarah for this track, one that is as current as what it should be, but still evoking emotions about pressing on and moving towards the future, rather than just getting stuck in where we are now!