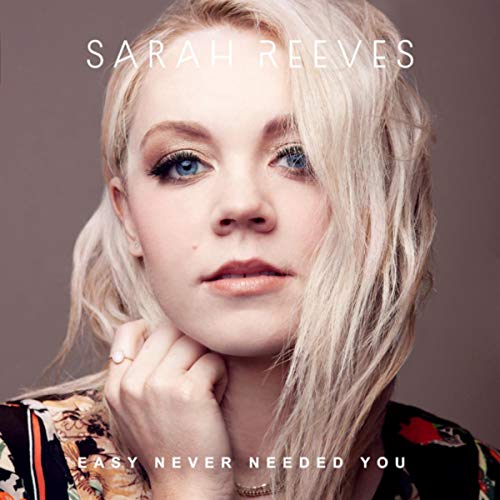 This is a unique review of sorts. Sarah Reeves, quite possibly one of the biggest comebacks in the history of CCM (include to that Nichole Nordeman and Rebecca St. James), is fast becoming one of my favourite CCM female artists of late. The latest addition to the Word Label Group artist roster, Sarah Reeves is in good company. Artists like Francesca Battistelli, Sidewalk Prophets, Big Daddy Weave, Stars Go Dim, Meredith Andrews, Love & the Outcome, Blanca and For King and Country, to name a few, are all on a record label that is one of Christian music’s biggest labels (alongside Capitol CMG and Provident Label Group). And while now we are starting to hear and see Sarah and her music for what it is- unique, powerful and heartfelt, she has been around the industry for quite some time. Since unveiling her debut EP titled Sweet, Sweet Sound way back in 2009, she has continued to show us her talent, even throughout these last 10 years, she’s been under the radar and very underappreciated…until now, that is. Following up Sweet, Sweet Sound with another EP in 2010 (God of the Impossible) and a full-length indie album in 2011 (Broken Things); Sarah Reeves went dark, and I mean radio silence, for quite some time after her 2011 album. While she released a few worship covers here and there, it wasn’t until she signed to Word Records in 2017 that she had a new renewed sense of passion and of making music. And now in 2018, Sarah has unveiled to us her next full-length album after Broken Things in 2011, and her first full length under Word Label Group.

And so…onto the review. Which is going to be different. Because, in essence, much of this review has been reviewed before…by me. Songs like ‘Nowhere’, ‘Details’, ‘Right Where You Want Me’, ‘Something About You’ and ‘Speechless’ to name a few, were all released during various points in 2017 and 2018, and all culminated into an EP titled, yes, Easy Never Needed You that released in April 2018, and which the review of it can be read here! Since that release, I have reviewed the singles ‘Easy’, ‘Just Want You’ and ‘Always Been You’…and so, you can take a read at these reviews on the clickable links, and thus, as you can tell, much of the review of this album has been said… and so, one reason why I didn’t want to just do a standard review, was because I didn’t really want to take what I’ve written before, and just copy it verbatim here- it seems a little redundant and pointless- but rather, I will discuss and share my own thoughts on the songs that have not been expounded on, and share my overall thoughts of the album as a whole in the paragraph below.

‘I Love You (feat. Kirk Franklin)’ was the last remaining song to release prior to the album release date, and if I’m honest, is actually one of my favourite songs from Sarah…ever. Standing only at 3:22, the song speaks volumes, as Sarah unveils to us a love song to God in which she declares ‘…let this simple song I bring reach the ears of Majesty, I am falling on my knees to worship You, I love you…’, while Kirk Franklin lends his quasi-rapping quasi-spoken word moments to the song in which he himself declares his own desire for the Lord, but also revealing his own inner struggle as well. In fact, lyric-wise, Kirk’s contribution to this duet is probably the most poignant a collaboration was since KB’s addition to for KING AND COUNTRY’s ‘O God Forgive Us’. Here’s the transcript of Kirk’s part below:

Listen, I’ll be honest with You, there’s so many things that You allow that I sometimes question
How You feel about me, I know how I feel about You, but the things that You allow
It’s very hard to trust Your heart when I can’t see Your hand
But as I dig deeper and remember that I was created to love You, even when I wanna run from You
The love I have for You pulls me back, since I was a little boy, I’ve been chasing You as You’ve been chasing me and here I am now
Even with my limp I’ll run, even in my tears I’ll run
Because I’m running after You ’cause I’m so in love with You
I mean, I’m desperately, crazy, fanatically in love with You
Because I can think of how lost I was and how incredible You were
To take me in and make me like You, man, I’m not there yet
But I’m still running, let’s go

Amazing isn’t it? Reading this, I’m sure there’s not really much more to be said. Only that if there’s one song to listen from this album, this’ll be it. Sarah also does her own rendition of Kari Jobe’s ‘Fall Afresh’ (that was previously on her own 2017 album The Garden), and now redone with a more EDM feel, while her song ‘Angels’ is the last remaining new song on Easy Never Needed You, and is a song that is probably the most worshipful, yet the most EDM. If you can ever find a song that can marry together worship and EDM and do it well, it’ll be ‘Angels’, a song that states that God is with us in our questions, with us in our unbelief, our pain, our problems, when we cry out to Him for whatever reason. Once we realise that God is near to us, we will be singing with the angels, crying holy, because we’d know that whatever happens in our lives, be it good or evil, will in fact lead us more to see more things about ourselves and God in the process. And if a song like ‘Angels’ can undertake such a revelation as that, then the song itself has served its purpose!

There you have it… Easy Never Needed You! And even though this new album from Sarah is quite possibly the most different set of songs she’s ever written and recorded in her career thus far; it is good to see Sarah experimenting with songs out of her comfort zone. And with songs like “I Love You”, Nowhere”, “Right Where You Want Me”, “Something About You” and “Just Want You” anchoring the album musically and lyrically, this new album is certainly one to be excited for if you enjoy music with a worshipful and alternative edge. Sarah Reeves is an artist that, still relatively up and coming even after quite some time, will hopefully receive the recognition she deserves after this new album. Well done Sarah for this set of songs, arguably one of my favourite worship albums I’ve heard since Cimorelli’s Alive way back in 2017. Easily one of my top albums of 2018 so far, this is a must have for anyone who loves Sarah Reeves and her music previously, worship music as a whole, or both!

4 songs to listen to: Something About You, I Love You, Easy, Just Want You