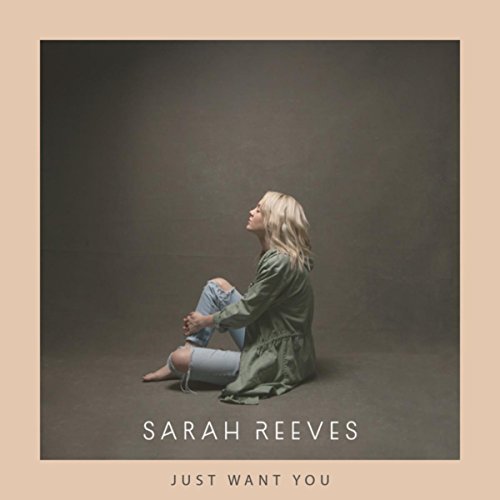 ‘…I’m so excited to finally release this song! The chorus of this came straight out of my heart one day as I was pretty upset and emotional about a situation that I was in. My prayer was God, I don’t want it if You’re not in it. It doesn’t matter if it looks “good” on the outside. It doesn’t matter if it means “wait”. Ultimately, God holds the very best for us and His ways are so much better than our own. It may not always make sense in the moment, but as long as you are walking in the footsteps of Jesus; you are walking into destiny. I hope you let these lyrics and melodies sink into your soul. Let it take you into a deeper trust and relationship with God. I hope you enjoy this song, “Just Want You”…’ Sarah Reeves would have to be the artist out of any (new or seasoned veteran) that has surprised me the most over these last couple of years or so. From releasing her comeback single ‘Nowhere’ last year under Word Label Group after years of being under Sparrow Records (and then a season not undertaking music at all), to unveiling songs like ‘Details’, ‘Something About You’, ‘Feel the Waters’ and ‘Speechless’ to name a few, all culminating into an EP titled Easy Never Needed You that released in April 2018, I was content for Sarah to only release an EP, because frankly, it eases her back into the music industry and releasing music after a long, well needed break away. Yet, on June 1st, Sarah unveiled ‘Easy’, the title track of the forthcoming album also titled Easy Never Needed You slated to release in the future (maybe at the end of this year?)- that means…more music coming from Sarah!

Sarah Reeves has actually undergone a welcomed transition from a pop radio friendly artist in her Sparrow Records 2009-2011 days to now a worship EDM artist on Word Records (and it’s very much welcomed by myself and I’m sure many others!), one that I’m sure has meant a lot of growth, mentally, spiritually and emotionally for her as she journeys into a place where her music stretches not only the perceptions of worship music but of radio friendly worship music and what it should look like. Sarah Reeves and Phil Wickham both have challenged my own perceptions of worship music this year, and with the introduction of Sarah’s new reflective melody titled ‘Just Want You’, this song is a welcomed addition to my own Spotify and iTunes playlists- and the song is very much easy to listen to, with Sarah’s vocals reminding me of other similar sounding musicians like Kari Jobe, Meredith Andrews, even Sarah Groves and Nichole Nordeman!

‘…I remember writing the chorus of “Just Want You” literally with tears in my eyes. It came so quickly out of my heart. I didn’t know that it would eventually become a worship song that we do in church or even a song that I would put on my record. I just had to let my feelings out. I put the chorus in my back pocket thinking maybe it was just a moment I needed to have with God… then while sitting at this table at our church writers retreat at lunch (not even a real session!) our conversation reminded me of that chorus. These guys Josh Silverberg, Andrew Holt and Henry Seeley helped me craft the rest of this song and it came together in about 30 minutes. It was like Heaven just showered over us the exact lyrics and melodies. It was effortless. Rarely does that happen, but when it does it feels like a sweet gift from God…’ As I have said in my review of ‘Easy’, I have recently let the artist speak for themselves when it comes to me writing a review; and giving the artist a voice about what they reckon the song is to them and what they want listeners to obtain from hearing such a track. I did that in the ‘Easy’ review- not really say much about what my interpretation of the song is, but rather Sarah’s, and thus, in this one, it’s no different. Reading the two above quotes, we are reminded that Sarah wants us to come to a place of surrender, of just wanting the Lord and nothing else- no other distractions, or what we think are not distractions, but what we believe to be important things (but in real life are actually superfluous!). And I know in reviews gone past, I’d just write and write (and often I’d just write things that for me at the time didn’t really make much sense until later when I sat back down to read them and be really impacted by what I wrote!), I find that sometimes, less is more. That by writing less, I can let the song speak as it was originally intended.

‘Just Want You’ is a song that states that if God is not in the thing that we’re doing, we don’t want to be doing that thing. That we’re only going to be pursuing after the Lord and His purposes for us, that things done only in our strength will ultimately fall apart, because ultimately, we as humans are inherently selfish, rather than God’s purposes which are entirely selfless. That trying to do it all in our own strength will ultimately cause us heartache, stress, uncertainty, worry and even physical ailments. That surrendering to God as it should’ve been from the beginning will result in us just sitting at Jesus’ feet, and longing for us to be fully in tune to what His purposes are for our life. ‘Just Want You’ is a prayer, for God to take away the things that will ultimately steer us away from our Father and Saviour, even if at that moment, we may think it doesn’t. With the song produced by Robert Marvin, who also had has hand in other songs like ‘Ships in the Night’ (Mat Kearney), ‘Til the End of Time’ (Cody Carnes), ‘You Alone Can Rescue’ (Matt Redman) and ‘More Than Anything’ (Natalie Grant) to name a few; Sarah’s delivered to us a winner, and a song that’ll hopefully give us healing and comfort, a moment of realisation and revelation as we really truly understand what it means to declare from the outset that ‘…I don’t want it if You’re not in it, I just want You…’

There you have it… ‘Just Want You’, off Sarah’s new album (not EP, but an album) Easy Never Needed You, track listing TBA and coming TBA 2018. I’m sure it features every song from Easy Never Needed You EP that dropped in April 2018…then again, maybe it won’t. Nevertheless, ‘Just Want You’ is heartfelt against the backdrop of string instruments and the piano, as Sarah invites us to partake in the moment of ponder and consideration, that doing things without God will ultimately end up in vain, and to often come to a place of surrendering everything to God can often be a long process. Nevertheless, a declaration like what is in this song is very much worth the long periods of renewal and rework God can often do in our lives. Sarah Reeves is an artist that, still relatively up and coming even after quite some time, will hopefully receive the recognition she deserves after both this new song (and ‘Easy’) and her new EP that released not too long ago. Well done Sarah for ‘Just Want You’, can’t wait for the full-length album coming later on in 2018!