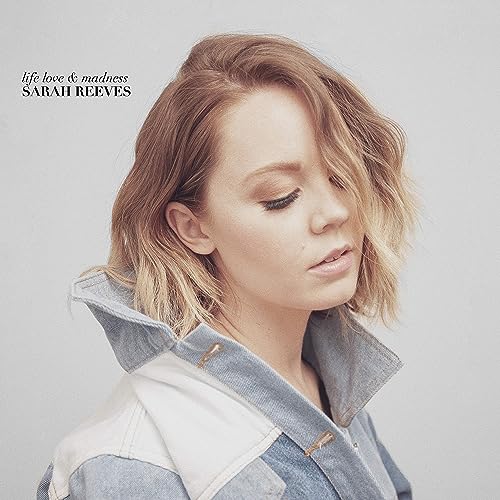 There have been quite a lot of posts on our site about Sarah Reeves. All throughout 2017 and 2018, Sarah released singles periodically, culminating in a full-length album release called Easy Never Needed You. And as Sarah released songs maybe about a month apart, we reviewed each song, as we never knew if a full-length album would materialise. I think in that time Jon posted 10 reviews about Sarah Reeves. Each of them comprising of a similar introduction and each of them delving deep into who Sarah is as a person and as a woman of God. So it stands to reason that right now, as Sarah has recently released her new album Life Love & Madness to the general public, that there doesn’t need to be much rehashing of old reviews. If you want, you can read about Sarah Reeves right here and Jon’s review of Easy Never Needed You here…and now that you’re all caught up, let’s dive into Life Love & Madness and see how this project  compares to the rest of the songs on Easy Never Needed You.

First things first- here’s the disclaimer. Life Love & Madness is a mainstream album. There’s no mention of Jesus or God or Christianity, and only one mention of spirituality. Sarah has decided from the outset that this project will be about her life and all of the ups and downs and all of the messy parts and the all-together parts, for the past ten years. and if we take that into account, and realise that God uses anything He wants to in order to us to grow as people and in order to grab our attention and in order for His name to be glorified… well then we can realise that no matter what Sarah releases, or no matter what anyone releases music-wise; God can and will use it for His glory and our good. Isn’t that something to celebrate?

Opening the track with the poppy and super nostalgic “2009”, Sarah skilfully takes us back in time, and earnestly relays that she longs for things to be simpler and less complicated. Reminding us all that though time changes people, and time makes you long for the person you used to be who you might think is more carefree and enjoyed life more; time also makes you realise that the person who you’re becoming and the person whom God is making you to be, is the person you should always strive for and not the past. With a more joyful and upbeat beat, “Heart First” delves into the dichotomy of the inner turmoil between the head and the heart, and the conscious decision that Sarah is going to, in very situation, ‘…[jump] in with my heart first, heart first, 99 times out of 10, I’m all inside of my head, I’m gonna probably get hurt, get hurt, I might be a little bit scared, for once in my life, I don’t care, I’m jumping, I’m jumping…’; while the passive aggressive low-key savage track “Not My Style” speaks to the doubters and the haters, and the people who may not agree with her decision to release a mainstream album, reminding us all that only the people who truly know her can comment on her walk with Jesus, and not anyone else- and also saying that it’s not her style to conform to what the world wants her to do.

“Paradise” is a fun, heartfelt pop song about the way Sarah feels in the presence of her husband- like she’s in paradise, however “Drive” and “Don’t Feel Like Fighting” reveal the ugly and uncomfortable side to marriage; as the former is a high octane pop song about taking a drive to clear your head in the midst of an argument, while the latter is the lead single and a heartbreaking ballad of what could eventuate when a couple argues so much- sleeping in separate bedrooms and fighting all the time that it makes both parties miserable, that ‘…I don’t feel like crying tonight, picking a side, losing our minds, just so we can say we were right, baby, what for? I don’t feel like fighting ’cause we’re making it worse, throwing our words, crossing the line, just so we can say we were right, baby, what for? I don’t feel like fighting anymore…’. “Motions” is admirable in its lyrical content, as Sarah reminds us that she’s feeling weak spiritually and needs a miracle, declaring that she feels that she’s going through the motions; yet the music here is super distracting and somewhat jarring to listen to. Thankfully, “Dance To It” brings the tempo back and is one of the album highlights in my opinion, as Sarah delivers a high quality poppy celebratory track, with Sarah earnestly crying out that in every high and ever low, we can celebrate and ‘dance to it’ simply because we are alive and we still have purpose and meaning because of the breath in our lungs.

“Fuel to My Fire” is presumably about someone who has hurt Sarah and has assumed something about why she was recording a mainstream album in the first place, and having an assumption that Sarah is struggling in her faith- with Sarah declaring that ‘…You try to put a label on me, just like everybody’s paradigm, go ahead and tell me that I’m crazy, underestimate me one more time, it’s only fuel to my fire, you just fan my flames, fan my flames…’ and letting us know that hurtful comments only serve to make her more determined and resilient; while “Say The Word” is a piano pop melody that tackles the taboo topic of depression and mental health issues, with Sarah wanting to help the other person and bring them back from the brink of a shell of a person and someone that is not themselves, asking them that they need to say the word and Sarah will do whatever it takes to make them happy. “Anxious”, released in 2019, is a laid back vulnerable, emotional, and personal song peels back the layers of Sarah’s anxiety that she has now shared with the world. Revealing a part of yourself to a lot of people is scary and at times extremely difficult, but in this song, Sarah has taken a leap of faith. The result is one of the most inspiring tracks she has ever recorded- and as you read the story behind the song below, let us remember that whenever we feel down or unworthy or unloved, we can talk to someone and talk to God.

“…this song is very raw and honest. I wrote it coming out of a season where I was experiencing anxiety more than ever before. I wasn’t planning on releasing it as my single. It felt too vulnerable and too different from anything I’ve ever released. After showing some friends and my team, I knew it was something I needed to put out in the world. If you struggle with anxiety or depression, just know that you are not alone. It doesn’t define you. I believe that you can and you will overcome this. It may be a process, but it’s time to come out of hiding and receive the healing and freedom that is available to you…”

“Easy To Love”, a repetitive yet nonetheless charming pop ditty, vividly depicts the ease at which Sarah loves her husband, while the super vague “Not Ready To Let You Go” could be about an ex or a spouse or a relative who has passed away. I don’t think Sarah is singing from experience here- after all I’m sure she’d say something on social media if there was a major shake up in her life; however I am positive that though I myself don’t connect with this song much, that’s not to say that others won’t as well- perhaps someone will resonate with this song. Life Love & Madness ends with the powerful and compelling “When It Gets Good”, whereby Sarah delves into the concept of difficulty and adversity actually highlighting our resilience, our tenacity and our resolve to succeed, that ‘when it gets hard, that’s when it gets good’.

My full length album Life Love & Madness is available now!!! I don’t think I’ve ever been this nervous and excited at the same time to release a project. These songs hold stories of the past decade of my life. It’s different than my norm. It’s real. It’s personal. It’s vulnerable. It’s a piece of work we’ve been laboring over for the past two years. I’ve held on to every lyric, melody, note and visual element so tightly and now I feel like I’m letting a bundle of song balloons go into the sky. I pray they fall on the ears of people that need to know they aren’t alone. I pray they spark joy. I pray they bring a smile to your face and maybe a few tears too. Thank you guys for all of your love and support. Thank you to every songwriter and producer that gave your best to this project. Thank you to my entire team that constantly work behind the scenes making all of this happen. I am forever grateful.

I’ve been reading some of the comments on YouTube lately from Sarah Reeves’ most recent music videos- and I’ve noticed that while some listeners love her music, others are worried for her faith and are concerned that she is falling away. Yet they’re not doing it in a loving way- and are spouting our Bible verses, thinking that will ‘wake her up’. However this album obviously has a purpose, and we as humans do not know the whole story about what Sarah has been through over the past few years. in fact, we know next to nothing- and even though Sarah has said vague ‘stories behind the songs’ in her album release party; I believe it isn’t our job to judge the hearts of those we don’t know. Personally, would it be nice if she sang ‘Christian’ music again? Yeah, it would actually. But I’m not going to crucify someone and their ever evolving beliefs (because I do believe that Sarah is in the process of deconstructing and reconstructing, just like Jon Steingard of Hawk Nelson, and just like Jason Gray did as well!) simply because it doesn’t match up with mine. Do I like this album. Yes, it is resonating, and some songs are just plain cliché musically though. Lyric-wise though I believe that this is Sarah Reeves’ most vulnerable work, and while I will always hold a special place in my heart for Easy Never Needed You, Life Love & Madness still packs a punch and still deals with issues that we all face every day. Maybe this album is a ‘one-off’ in singing about ‘worldly’ things and the next album will be more about God. Maybe this is the new Sarah Reeves. Whatever the case, let us remember that we’re all work in progresses, and that God is shaping each of our hearts everyday to be more like Him. Let us remember this when listening to Life Love & Madness. And when we do, I am positive that God will speak in this album. Yep, you better believe it! Well done Sarah, I can’t wait to hear what God has in store for you next!

3 songs to listen to: Heart First, Dance To It, Anxious