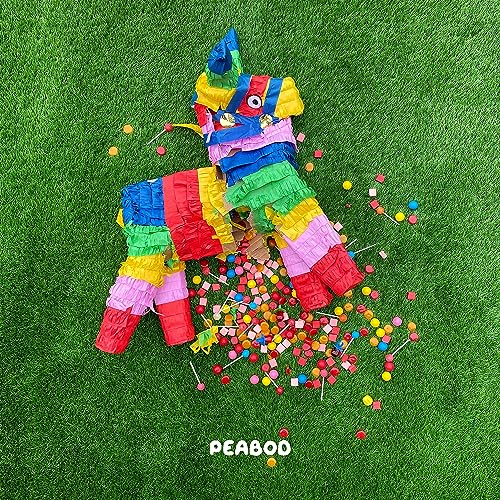 In February 2019 just around about nearly 3 years ago, I undertook a major risk musically. I faced my ‘fear’ of rap music (not really a fear, but an apprehension!), and reviewed an entire album of the unique genre. Jonah by KJ-52 doesn’t really count when I reviewed that project back in 2017, as at the time, KJ was ‘singing’ or at least trying to, on a few tracks, so it wasn’t ‘pure rap’ if you know what I mean. So as I was listening to and reviewing rapper Peabod’s debut album Healthy Snacks– I gave the record an unexpected high review (which you can read here!), and hence I went off and check out both of Isaac’s new singles “Anti-Social” and “Left Out” as well. I concluded that these songs were crazily awesome and that Isaac is a pretty ingenious songwriter (don’t believe me? Check out both of the reviews I wrote about Peabod here and here!); and that Isaac is one of the best rappers in my opinion of this generation- mainstream and Christian (and maybe destined to become the next KJ-52!). I was positive that Isaac was due to release a new album in 2019- yet this actually eventuated into Backpack EP and featured “Antisocial” and “Left Out”, plus “Side Hustle” (which I also reviewed), “Hoodie”, and “Backpack”; but if you want more of your PEABOD fix, then never fear, cause PEABOD unveiled a 5 song EP called Growing Up Pt. 1 EP in 2020 (reviewed here). We all need inspiration, encouragement, reassurance, hope and joy in our lives, especially with this year we’ve been having; and thus Peabod’s happy brand of rap is a breath of fresh air and revitalising indeed. And thus, because Growing Up Pt. 1 EP was in my opinion so, so poignant, heartfelt, reflective and inspiring… how about we dive deep into Isaac’s latest single “My Favorite Part”?

Is this song a stand alone single? The lead single from the 2nd part of Growing Up? Regardless, this song is actually quite powerful and moving. With Isaac skilfully and cleverly relaying the fact that perhaps working hard and doing the extra yards even when you cannot see the results and the fruits of your labour… is indeed the best part of the day and the favourite part of his day- he highlights that being faithful despite the circumstances surrounding you, is a beautiful measure of what kind of person you are inside. A song that speaks about the daily grind and never quitting, even when the going gets tough, we are reminded to step out in faith and do the things we want to as well- even if it does contain elements of ‘doing the hard yards’ and the day-to-day mundane things

So…after listening to Healthy Snacks, Backpack EP, Growing Up Pt. 1 EP and now “My Favorite Part”; do you reckon PEABOD has encouraged me to listen heavily to, and review all of the other Christian rap albums this year and the many years before? Nope…just Isaac’s music and other inspirational artists like Lecrae, KB and Steven Malcolm. But the inescapable truth that PEABOD will be big this coming year or two still remains. So what are we all waiting for? Let’s dive in and be antisocial together so that we’re not left out together, while we do some side hustling on the side while wearing our favourite hoodie and carrying our favourite backpack. While we’re also being real with each other and talking about our big feelings, and praying to our heavenly Father, an act in itself which is wonderful and scary; remembering too that we can and should love everybody because He has loved the prodigal. Well who are we kidding? We’ll probably just sit at home eating some healthy snacks too! And wouldn’t that be our favourite part of the day? Broccoli flavoured shepherd pie anyone? Chocolate coated fruit? What about a dairy free and gluten free chocolate cake?

I wrote this in a place where I really was hungry for a new season (I know we’ve all felt that way at some point over the past year and a half). I had this thought “What if working hard and grinding for that new season WAS my favorite part?” And BAM. New song. I hope it can be an encouragement to you, wherever you are, whatever you’re working on or through. God’s at work too.