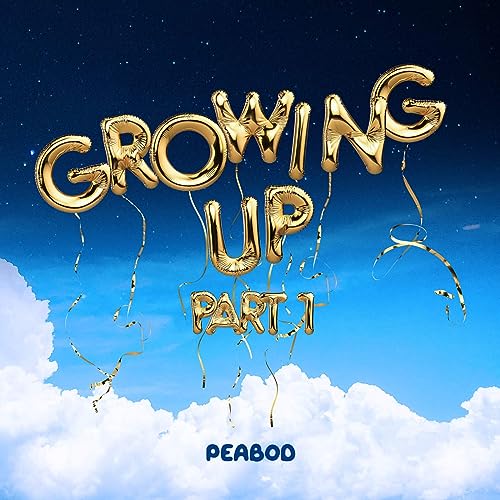 In February 2019 just around about just under two years ago, I undertook a major risk musically. I faced my ‘fear’ of rap music (not really a fear, but an apprehension!), and reviewed an entire album of the unique genre. Jonah by KJ-52 doesn’t really count when I reviewed that project back in 2017, as at the time, KJ was ‘singing’ or at least trying to, on a few tracks, so it wasn’t ‘pure rap’ if you know what I mean. So as I was listening to and reviewing rapper Peabod’s debut album Healthy Snacks– I gave the record an unexpected high review (which you can read here!), and hence I went off and check out both of Isaac’s new singles “Anti-Social” and “Left Out” as well. I concluded that these songs were crazily awesome and that Isaac is a pretty ingenious songwriter (don’t believe me? Check out both of the reviews I wrote about Peabod here and here!); and that Isaac is one of the best rappers in my opinion of this generation- mainstream and Christian (and maybe destined to become the next KJ-52!). I was positive that he was due to release a new album in 2019 (which actually eventuated into Backpack EP and featured “Antisocial” and “Left Out”, plus “Side Hustle” (which I also reviewed), “Hoodie”, and “Backpack”; but if you want more of your PEABOD fix, then never fear, cause even if you haven’t listened to “Big Feelings” nor “Heavenly Father”, nor “Wonderful & Scary”, which all dropped as singles a while ago; now we have a 5 song EP (which released one and a half weeks ago), containing aforementioned three tracks and 2 new melodies.

The EP opens up with “Wonderful & Scary”, and truth be told, “Wonderful And Scary” is one of my favourite Peabod songs ever. Yep, you heard that right. I firmly believe that this track is one of the most impactful and resonating songs that Peabod has ever done! It’s a song that needs to be experienced and listened to a multitude of times in order to fully appreciate Peabod’s journey of stepping out in faith into the unknown and trusting God in His almighty plan. I know that when you speak about the song like that, “Wonderful And Scary” sounds extremely cliché… but let me present to you all the music video and the lyrics below. Now… have you seen the powerful music video and read the lyrics? What do you think of it? Confronting, comforting and compelling, am I right?

Planet Earth, 1993, enter little me
A new Peabody baby born in the heart of the 253
New ID when I met the King He gave me everything
Now I get to sing my mic in the hand with the wedding ring
But things are not as simple as an 8 bar summary
Life can change the tempo fast as we make memories
One day my Nintendo seemed the height of luxury
Now I’m wondering what’s under the surface of all my feelings
This the second my second album
Progresses
To look for sense in the messes
A lesson amidst the guessing
So Jesus please give me blessing
When I step into this session
Of wrestling don’t let me forget
My best message is from heaven
‘Cause growing up is a trip, each day adjusting my grip
One day I think I might slip, the next I’m busting my lip
But then again on the flip, no adventure’s bigger than this
So there’s not a single moment that I want to miss

This is two for me, two for all the OG’s
The ones who knew bout Healthy Snacks way back in 2017
Still feels like dream, still got no clue what it means
But seems to me that God’s always
Got something up his sleeve (I believe)
But I gotta admit I’m a tad bit fixed
On a mix of fears and what ifs
Should I go through with this
Will I get twisted cynical cuffs on my wrists
Will I miss high fives and throw fists
When I sip lies, will it make me spit
Will I take the stairs, Miss the lifts
Will I be too proud to take gifts
Even if the what if’s happen right now
And all the fears inside of me just climb out
Nothing’s gonna change with my eyes down
The voice of faith says God hears the sounds
Of his children
Walking, growing, learning
Living and discerning
Our God daily bears our burdens

From the outset, it’s clear that the moody and somewhat darker “Big Feelings”, another ‘familiar’ tune, featuring Aklesso on guest vocals, sugarcoats nothing; as Isaac eloquently reminds us that our personal struggles and our feelings of inadequacy are real, and that dealing with ‘big feelings’ can make us feel somewhat small and hopeless. However even with the darker tone here, PEABOD still brings the focus back to God. With the track (especially the music video) bringing the vibe to something like NF rather than KJ-52, let us remember that it is the God of the universe who helps us all the time, especially with our big feelings and our issues we find hard to deal with. Yes, yes, I know that PEABOD is being super vague here with the lyrics, but as we read his heart behind the song, let us marvel at the honesty and vulnerability here, as PEABOD pulls back the layers of more of his spiritual journey through these tracks!

I am so excited to share my new song BIG FEELINGS (featuring Aklesso) with you. I’m also thrilled to show you the music video for BIG FEELINGS, directed by my good friend (and one of the OG Roommates), Jake Cambell. You might notice that this song has a “little different vibe going on here.” In the last year or so, God has been working in my heart to bring some healing after a long season of bitterness. When I started writing again, I felt compelled to write about this journey that He’s taken me on. Because it has been WILD. To best tell that story though, I have to sing about the bitter moments; the moments that made me feel BIG FEELINGS. I’m guessing that at some point in 2020, you’ve probably felt some BIG FEELINGS as well. My hope is that this song would sound like freedom to feel those feelings, even if they’re heavy, and then to give them back to God. According to Ephesians 3:12, we know that because of Jesus, who was fully human but knew no sin, we can now “approach God with freedom and confidence.” Only He has the strength to come alongside us and carry our burdens. This is just one part of the story. There’s a lot more to come. But that’s for another time

“Heavenly Father”, the last remaining single on this EP, features Gotee Records artist Cochren & Co., as well as Resound; and we are glimpsed into Peabod’s singing instead of rapping… and it’s pretty good. The subject matter is still dark (it’s about depression and feeling down- just listen to the lyrics and you can tell!), but the song is more palatable and accessible than “Big Feelings” because of that radio friendly atmosphere. Adding Cochren & Co. on the chorus is very seamless as the duo sing in perfect harmony here I’m not that well versed with Resound- is he a remixer or an instrumentalist? If he’s a singer, I can’t hear him. Regardless, “Heavenly Father”, though masked as a pop song, is a track that is lyrically quite deep. As Peabod fervently relays to us that he needs to pray to Jesus daily and sit in His presence daily in order for him not to feel so down and despondent, as ‘…I feel too close to this…I’m in the thick of it…’, we are reminded that we can call on God, especially when we are feeling low and sad. “Love Everybody”- one of the brand new songs, features Tedashii on guest vocals, and is a 3 minute ball of fun and energy, with both vocalists declaring our need to love everybody as Christ has first loved each one of us; yet the EP pinnacle is “Prodigal”. The album closer and a duet with PEABOD’s wife Belle, even tops “Wonderful And Scary”. With PEABOD and Belle singing about the prodigal son and the older brother and the fact that God loves both of them and loves each of us regardless of the mistakes we have made… boy this song is very confronting, comforting and profound. With an epic music video as well- if there is one song to listen to here, it’s be this one.

Two kinds of children, one Father
Two kinds of drought, but one water
Each mocking in our own way, scoffers
Each chasing down a different offer
Some of us write like we’re the author
Even though the jar is not the potter
Some of us are wild and we wander
Taking what we’re given with to squander
Everybody knows about the runner
Running in the fast lane, tryna feed his hunger
Gunning for his dad’s pay, racking up the numbers
Spending big til that day the money went under
He wonders living in the slums where he slumbers
Can the debt he collected be covered
But there is grace even down in the gutter
Thank God that he loves the younger brother

Two kinds of man but one maker
Two kinds of sin but one savior
One son thinks that he can find favor
By working harder than his younger neighbor
But there can be an arrogance to labor
When I start comparing thinking that I’m greater
“Look I built a city, that makes me the the mayor”
Forgotten what you give me, that you are my creator
I have tried to build it, I have worked hard, I have willed it
Filled it
Every brick I add I think I’ve killed it
But skills miss let myself down, feeling wilted
Stilts get you high but the bar is higher still kid
I am not good, I’m the other
My storm came I tried to build a bunker
But there is even grace for the thunder
Thank God that he loves the older brother

So…after listening to Healthy Snacks, Backpack EP and now Growing Up Pt. 1 EP; do you reckon PEABOD has encouraged me to listen heavily to rap and review all of the other Christian rap albums this year and the many years before? Nope…just Isaac’s music and ‘happier rap’ like Hollyn and Steven Malcolm. But the inescapable truth that PEABOD will be big this coming year or two still remains. So what are we all waiting for? Let’s dive in and be antisocial together so that we’re not left out together, while we do some side hustling on the side while wearing our favourite hoodie and carrying our favourite backpack. While we’re also being real with each other and talking about our big feelings, and praying to our heavenly Father, an act in itself which is wonderful and scary; remembering too that we can and should love everybody because He has loved the prodigal. Well who are we kidding? We’ll probably just sit at home eating some healthy snacks too! Broccoli flavoured shepherd pie anyone? Chocolate coated fruit? What about a dairy free and gluten free chocolate cake?