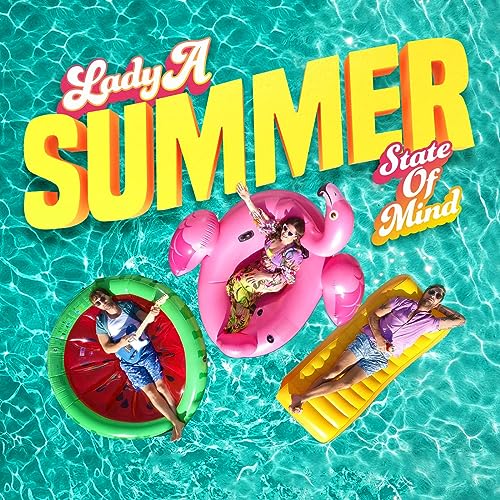 Lady Antebellum (or Lady A as they are now known!), are one of my favourite country artists ever. I don’t know how many times I’ve mentioned this (most probably a lot!)- but I personally only started heavily listening to artists in the country genre around mid-late 2018, when I reviewed Carrie Underwood’s Cry Pretty, and then later on as I blogged about more and more country artists– starting with Maren Morris, and ending with Chris Stapleton– although Jon did blog about The Shires and Mickey Guyton as well, while I blogged about Tim McGraw and Taylor Swift last year- but Taylor is considered someone who does a lot of musical genres. And since that time, I’ve become amazed and intrigued by the genre at large- at the honesty and vulnerability that I originally thought was only present in Christian music, and at the largely relatable and impacting songs. I became astounded by the fact that I resonated with many country songs despite me not having lived in America and not experienced much of what was specifically sung about in country songs. It goes to show you the power of a song no matter the genre, and more specially the power of God moving through a particular song or a particular artist from left field- because if God can speak through Balaam’s donkey, then he can speak through anything, right? I used to be close minded and think that God can only speak through Christian music, but once that preconception and that wall was broken down, I became aware of other types of inspiring and thought-provoking music, and Lady A’s music was one of those other types of music that God was speaking through.

Now if you want to know more about what Lady A is about, and to know about their hit songs like “I Run to You”, “Need You Now”, “Hello World”, “Just A Kiss”, “Downtown”, “And The Radio Played”, “Compass”, “Bartender”, “Heartbreak”, “What If I Never Get Over You”, “Like A Lady”, “What A Song Can Do” and “What I’m Leaving For” to name a few; then you can read about them on Wikipedia or in Jon’s blog he wrote about them a while ago. Hillary Scott, Dave Haywood, and Charles Kelley have been making music and providing us with heartfelt and hopeful and inspiring anthems since 2008, and what has eventuated since that time has been one of the most eclectic and lyrically strong discographies in the modern era. Jon reviewed Lady A’s most recent album What A Song Can Do as well as their 2019 album Ocean (while I voiced my opinion on the deluxe edition of Ocean!). The band changed their name in mid-2020 (with a lawsuit following in the subsequent months); while right now there has been an amicable settlement to the legal battle. And it is in the aftermath of a 2 year-process that has now finished; that Lady A has unveiled their brand-new single “Summer State Of Mind”. A song that has “Champagne Night” vibes; Hillary, Dave and Charles ring in the season of summer in style, and remind us all that this is the time to sit back, kick back and enjoy yourselves.

When we got together and wrote this song a few months ago it almost started writing itself. We were all looking ahead to the warmer months and those easy-going moments that we enjoy most. When we had a chance to perform the song for the first time- during CMA Fest, the fans really got in the spirit – it was the perfect way to kick off the summer.

On the surface- this song isn’t particularly deep. It’s not really a ‘true’ country song, as much as it is a pop/country party song. Lyrically, it is weird to hear a song from Lady A about nothing much (a romantic song about two people using summer metaphors, or even a joyous, celebratory song about two platonic friends!)- because their previous hits remind us about how great songwriters they are. However, “Summer State Of Mind” to me, is somewhat of a guilty pleasure. There’s something about “Summer State Of Mind” that brings a smile to my face. I shouldn’t like this song. It’s shallow and vapid and has a gazillion country and party song stereotypes stuffed into the 3-minute duration. But… in some weird way, I do like the song. Maybe it’s because I can see that happiness and the joy on the faces of Hillary, Dave, and Charles in the music video. Maybe it’s because it’s a fun song that we need in these turbulent and complicated times. Either way, Lady A’s song isn’t that memorable lyrically. But it’s a fun song that I hope will cheer us all up… and that’s all that’s important for now, don’t you think?

Saying that I still like Lady Antebellum (or should I refer to them as Lady A now?) and will continue to listen to their music… I guess it may be controversial. Some would say I should abandon these guys and instead listen to ‘the real Lady A’… but while I firmly agree that this whole situation could’ve been handled a whole lot better; I for one am willing to give the benefit of the doubt to Charles, Hillary, and Dave. Whatever their music looks like in the future (they’ve stated that they’re going to release more singles from here on out!); I’ll still listen. “Summer State Of Mind” is proof that these guys can still bring the fun, joy and happiness amidst chaos, calamity and uncertainty. Right now, let me tell you that in the midst of a resurgence in COVID-19, songs like the latest from Lady A, are needed. It’s needed for comfort and needed for normalcy and needed for reassurance that we can still feel happiness and joy at one point or another. Should I encourage you all to listen to this song (and to an extent the band’s entire discography)? I’d say yes… but this song may not resonate with you, and that’s ok. Nevertheless, “Summer State Of Mind”, whether you love Lady A or not, is worth listening to- and hopefully your preconceptions on Lady A, and on party songs, can be shattered, and you can be reminded of the power of music and the power of Jesus moving through songs in unexpected ways that we all need within the past few years. Well done, Hillary, Dave and Charles- I can’t wait to hear what God has in store for you all next!