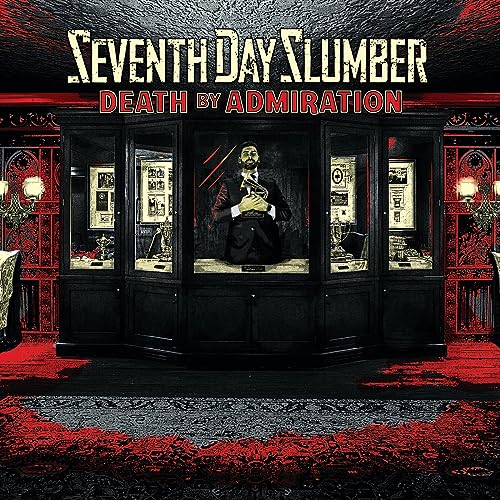 In my last review of anything from Seventh Day Slumber– their album Closer To Chaos; I reiterated that even though I’ll always love their earlier work because it is sentimental to me, perhaps I just didn’t love their later work. And that despite this fact Albums like Take Everything, The Anthem Of Angels and Love & Worship introduced me to worship songs with a rock edge. But for me, it is the ‘hard rock’ albums from the band that bring me some kind of disconnect. Found, Redline, and Closer To Chaos were albums that I personally didn’t love- and it wasn’t due to the lyrics. Joseph Rojas and co. are brilliant songwriters. But for me, it is the music that reminds me why I gravitate more to CCM, pop and country. Artists like Creed, Nickelback, Linkin Park, Evanescence, and Daughtry; were all artists that both Jon and I blogged about concerning our ‘influential artists of all time’ list, while Train, Lifehouse and Goo Goo Dolls contained some elements of alternative rock. Yet for me, I’ve found that Christian rock seems to try to stretch the musical boundaries further- just to say that they can. Pillar, Disciple, Fireflight, Nine Lashes, and The Letter Black; are all contemporaries of Seventh Day Slumber that are equally as ‘hard rock’ as them. Who could forget 80’s/90’s rock band Stryper though? And so… when Joseph and his friends announced their new ‘heavy rock’ album Death By Admiration sometime last year… well, I guess I shouldn’t have been intrigued and I shouldn’t have wanted to review this. But… I thought ‘let me check them out once more, just to see’. The result is a reaffirmation that rock music isn’t for me, and also a firm realisation that though these guys musically may not be my preference; there’s no denying their heart for Jesus and their strong lyrical prowess.

Now maybe you all might think ‘well Josh, this is supposed to be a rock album’. And yes, you’re right. Joseph Rojas and co.’s latest offering, their third on their own recently launched Rockfest Records, is indeed meant to be a rock album. From reading teasers about the album over the past few years, I reckon Joseph intentionally made it clear that there weren’t going to be any ballads, and they weren’t going to hold back musically on guitar. Ominous signs, so I suppose if you’re a really big fan of the band, you’ll probably love Death By Admiration! But for me, the casual fan who loves CCM and worship, and isn’t that into heavier material musically; then how does Death By Admiration live up to previous SDS albums? If I’m one of those guys who can’t really listen to heavy material for a long time, then would my experience from listening to Death By Admiration be tainted?

First of all, let me preface this ‘rant’ by saying that I’ve got nothing against SDS. I’m sure they are all wonderful human beings, and it’s clear that Joseph and his friends have a real heart for Jesus and drawing lives into the Kingdom. I for one have loved their previous albums Take Everything (2009), The Anthem Of Angels (2011), Love & Worship (2013) and We Are The Broken (2014) to name a few. Even Found from 2017 contained a few radio friendly ballads; while there’s no denying that the most personal and emotional song these guys have ever recorded is “Caroline” way back in 2005 from Once Upon A Shattered Life. However, there’s something about this latest effort that doesn’t really gel. Do you guys feel it? Is it just me? Maybe I’m not just that hard of a rock fan? Just like Closer To Chaos, Death By Admiration feels… lacking somewhat.

Lyrically, these guys do everything right though, and deliver probably some of the most poignant and emotional songs of their entire career. The confident and resounding title track declares the truth of Jesus Christ, while the song also speaks about the harrowing nature and reality of prevalent mental health issues that have been prominent since COVID-19 has ravaged the whole world. “Fatal Love” encourages us all to hold on and to hang on for at least another day (and is a song that could easily feel at home on mainstream rock radio); while “What I’ve Become” speaks about self-worth and identity and hating who you are as a person (or perhaps detesting your life before believing in Jesus). “Halos”, a powerful melody about losing a loved one and reconciling your feelings with the fact that they’re not around anymore, is a song that is as emotional as it is impacting. “Snake Mouth”, probably the most polarising melody on this album, has Joseph calling out ‘evangelists’ who preach the name of Jesus from impure motives in their heart; while the lone ballad of the album is the album ender “Can’t Say Sorry Enough”, whereby Joseph outlines his heartfelt apologies to a friend he presumably barely talks to now because of differing core values and morals, but a friend nonetheless who still loves him. But for all of these admirable lyrics, the music I believe is overall the biggest detractor for me. It’s a strength for those who love rock, but a weakness for everyone else.

Maybe musically the album is supposed to be this intense- to have headbangers, songs to rock out to, and songs to get your heart pumping and racing. Perhaps reviewing this album in the middle of the day (and on a rainy day in fact!) isn’t the best way to go, and maybe in time I’ll enjoy these tracks a whole lot more. But right now, as it stands, Seventh Day Slumber’s Death By Admiration is top notch lyrically as always, but I really can’t get past the intense rock music. Apart from the album ender, there’s not really much variety musically in my opinion, but hey, that’s just my own opinion. You all can disagree all you want. Now maybe I should have expected mostly rock songs going in, and I guess that’s kinda true. At the back of my mind, subconsciously I knew there’d be little to no ballads- however I guess listening to this project made me realise how much I didn’t resonate that much with harder rock music. Sure, some ‘rock music’ is great in moderation, but a whole entire album? I don’t know what it is but Death By Admiration overall is forgettable at the moment. Anyone else agreeing with me, guys? Now- onto rocking out to new singles and albums from Demi Lovato, Robbie Williams, Imagine Dragons and Goo Goo Dolls, as I prepare to review these projects within the next few weeks and months. Now that is my kind of rock!