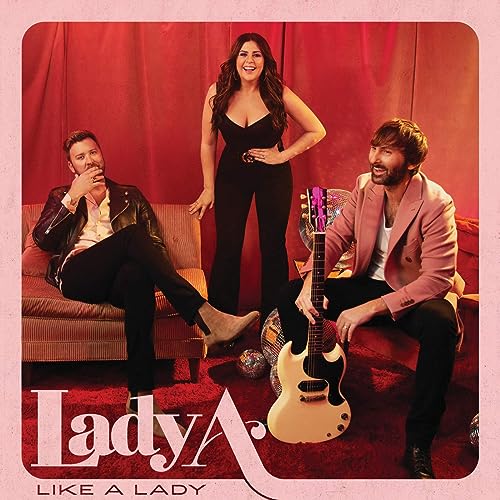 Lady Antebellum (or Lady A as they are now known!), are one of my favourite country artists ever. I don’t know how many times I’ve mentioned this- but I personally only started heavily listening to artists in the country genre around about a couple of years ago (when I reviewed Carrie Underwood’s Cry Pretty, and then later on as I blogged about more and more country artists– starting with Maren Morris, and ending with Maddie & Tae at the moment); and since that time, I’ve become amazed and intrigued by the genre at large- at the honesty and vulnerability that I originally thought was only present in Christian music, and at the largely relatable and impacting songs, that I in fact resonated with despite me not having lived in America and not experienced much of what was specifically sung about in country songs. It goes to show you the power of a song no matter the genre, and more specially the power of God moving through a particular song or a particular artist from left field- because if God can speak through Balaam’s donkey, then he can speak through anything, right? I used to be close minded and think that God can only speak through Christian music, but once that preconception and that wall was broken down, I became aware of other types of inspiring and thought-provoking music, and Lady Antebellum’s music was one of those other types of music that God was speaking through.

Now if you want to know more about what Lady Antebellum is about, and to know about their hit songs like “I Run to You”, “Need You Now”, “Hello World”, “Just A Kiss”, “Downtown”, “And The Radio Played”, “Compass”, “Bartender”, “Heartbreak”, “What If I Never Get Over You” and “What I’m Leaving For” to name a few; then you can read about them on Wikipedia or in Jon’s blog he wrote about them a while ago. Hillary Scott, Dave Haywood and Charles Kelley have been making music and providing us with heartfelt and hopeful and inspiring anthems since 2008, and what has eventuated since that time has been one of the most eclectic and lyrically strong discographies in the modern era. Just this past week though, Lady Antebellum (now called Lady A!) released their latest pop/country single “Like A Lady”, and though this new release is only 3 minutes, the track packs a punch and a heavy weight, so much so that I need to voice my thoughts. If you want to know our thoughts on the first 13 tracks of Ocean, then you can read my brother’s review of Ocean here– and as I agree with him that this album is one of the most heartfelt and inspiring and emotive albums of the past few years; so it makes sense for me to echo Jon’s sentiments. As for this song though- it’s typical country stuff we’ve known from the guys for so long… yet since this song is the first new song they’ve released since their name change, let me address the elephant in the room.

Yes, Lady Antebellum is no more, and Lady A is born. You can read about their name change here, but it has sparked some controversy- with the group now ‘sharing’ their name with an independent black gospel artist Lady A, given name is Anita White. It’s a messy thing indeed, with both sides trading blows and both sides suing each other (and still in a lengthy process of being sued may I add!). While I think it was indeed pretty unprofessional for Dave, Charles and Hillary to choose a name like Lady A without checking to see if anyone else was using it first (and we all know what the ‘A’ still stands for, even if the group claim that they’re trying to distance themselves from the slavery meaning of the word Antebellum!); I believe it’s also equally unprofessional for Anita to claim to want $10 million from Hillary, Dave and Charles, in the midst of a pandemic. Both sides are a tad focused in their approach as to how they would like this thing to be resolved… and all the while music is still being released. While I don’t want this ‘review’ to be like a bashing session towards both artists- let me just say this. I haven’t listened to Lady A (the artist) before, and that’s because of personal preference, and I may get around to that in the future. However a controversial name change shouldn’t make or break Lady Antebellum’s fans (I’m probably still going to unconsciously say ‘Lady Antebellum’ because that’s how I have always known them!)… their songs are still good, and they still stand the test of time. Why boycott certain artists just because of something trivial that can be resolved through mediation and maybe more of a dialogue?

I feel my most confident when I’m not trying too hard. I love getting glammed up and all the fancy clothes, but when I feel the most ‘me,’ it’s a lot more laid back – and I think that’s a lot of us. As we were writing it, I was like ‘It’s always been my dream to do a song that combines the things I love about Dolly Parton’s ‘9 to 5’ and Shania Twain’s ‘Man! I Feel Like a Woman!’ — two of the most strong, powerful female songs ever.

It’s incredible that Charles and Dave, in all their masculinity, are willing to sing right alongside me on this song. I think that is another powerful statement. It’s super important for strong, great men to stand beside women and propel them forward. I hope it makes fans feel confident too, it brings them joy and just gets people excited about seeing live music again.

We were some of the biggest champions for ’Like A Lady’ and we’re honored to stand alongside Hillary. We’ve had a front row seat to her strength over the years and we love linking arms with her on this song. This song has such a great feel to it. One of the coolest parts of being in a co-ed band is being able to share those different perspectives, so that’s just part of what we get to do.

Now let me get back to the music of Lady A. As the potential lead single for an album this year, “Like A Lady” is groovy, catchy, and a female empowerment song for this moment. It’s a song that myself and other males probably won’t fully understand, yet this melody of celebrating women and perhaps more broadly celebrating yourself and the way God made you, is a song that is indeed meant for these times. Especially since 2020 has been all doom and gloom… it’s nice to have a positive, optimistic song about joy and celebration of who we are as people. The perfect summer jam (or perhaps the perfect all-year jam!), “Like A Lady” reminds us that Lady Antebellum (or Lady A) still has many more years left in them- and many more years of quality also!

Saying that I still like Lady Antebellum (or should I refer to them as Lady A now?) and will continue to listen to their music… I guess it may be controversial. Some would say I should abandon these guys and instead listen to ‘the real Lady A’… but while I firmly agree that this whole situation could’ve been handled a whole lot better, I for one am willing to give the benefit of the doubt to Charles, Hillary and Dave. Whatever their music looks like in the future, I’ll still listen. “Like A Lady” is proof that quality and brilliance is still possible in the face of adversity- and hopefully in time, parties can heal, and a dialogue can occur that is beneficial to everyone. But right now, let me tell you that in the midst of COVID-19, “Like A Lady” is needed. It’s needed for comfort and needed for normalcy and needed for reassurance that everything will be ok. Should I encourage you all to listen to this song (and to an extent the band’s entire discography)? I’d say yes… but not right away, and in your own time. Nevertheless, “Like A Lady”, whether you love Lady A or not, is worth listening to- and hopefully your preconceptions on Lady A can be shattered, and you can be reminded of the power of music and the power of Jesus moving through songs in unexpected ways that we all need in 2020 and 2021. Well done Hillary, Dave and Charles- I can’t wait to hear what God has in store for you all next!