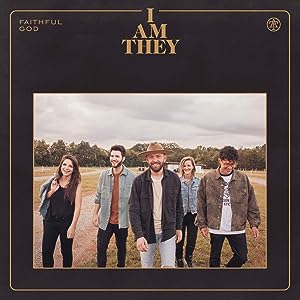 I AM THEY – Faithful God (Amazon mp3/iTunes)

I AM THEY have been in and around the music industry for quite some time. From their chart-topping self-titled debut album in 2015, to their sophomore powerful album, 2018’s Trial and Triumph, this group from Carson City, Nevada has had a lot of member transition over the years, of which can be read on the band’s Wikipedia page. In light of these personnel changes and whether or they they believed themselves that they would even continue as a band in the future, I AM THEY are holding steadfast upon the bible verse of Hebrews 10:23- Let us hold unswervingly to the hope we profess, for He who is promised is faithful. It is the epitome of why they are a band even now, and the collective theme around their 3rd album, Faithful God, that unveiled to us last week Friday (October 23rd 2020). And as I quote verbatim from the review that my brother did of Trial And Triumph, I realise indeed that this back could’ve in fact been a one-album wonder, which would be a very big shame- ‘…3 years ago, in late January, an album of 10 songs released on Provident Label Group, of a 6-piece worship band that could have been a one album wonder. It’s not that I Am They’s album was a bad album- on the contrary, it was exceptional, in my opinion, one of my favourite worship albums of 2015. The band released hit singles “From The Day” and “Make A Way” as well as personal favourite songs of mine “Your Love Is Mine”, “King Of Love” and the Crowder cover “Here’s My Heart”, amongst others…yet right after the band’s label debut and subsequent popular singles, news of a sophomore album didn’t eventuate. There was radio silence, and I was left to wonder what happened. I mean, it was such a unique, inspiring and hopeful project; maybe the pressures of recording a second album living up to the expectations of the stellar debut project was too much for the band…’ It is in this quote above that I realise, knowingly or not, that we expect our favourite artists to release new material every so often, and if they don’t give new songs within a time frame that we fans would deem acceptable, our heads start to wonder and ponder, and dare I say it, we may stop listeining to said artist and go on to listen to another. And that could’ve been the case with I AM THEY. Nevertheless, their 2018 album did eventuate, and songs like ‘My Feet are On the Rock’, ‘No Impossible with You’ and ‘Scars’ eventuated from the 10 track album, and arguably one of my favourite albums of 2018 thus far. Now here we are in 2020, and after yet another personnel change (Jon McConnell left for health reasons and was replaced by Brandon Chase, Sara Palmer moved from being the drummer to being behind the scenes, and was also replaced by Nicole Hickman, who previously drummed for indie pop-worship artist Holly Starr); Faithful God has come into fruition, with standout songs like ‘Faithful God’, ‘Delivered’ and ‘Found My Freedom’ to name a few.

Now let me just say from the outset that this review won’t really be a long one. If you’re really looking for a positive review of this album, go check out the ones on NewReleaseToday or Today’s Christian Entertainment. Because unfortunately, this album review, if ever this is one, won’t really be it. Yes, you have catchy standout songs on the album. ‘Delivered’, the acoustically driven gang-vocal ridden powerful declaratory song, is a great reminder of how we’ve been delivered and that God’s love has changed everything about us and within us, as we love forward in the light of who we were without Him, and who we are with Him; while promotional single ‘Promises’ is a 3 minute pop diddy about God keeping all His promises to us, that every word that He speaks is a definite moment of us trusting Him that whatever He says, He does. ‘Faithful God’ the first radio single, is a great follow-up to poignant track ‘Scars’ in terms of a hearfelt and emotive single, this time about how God is always faithful in His own timing and not necessarily ours. Our timing of things and His has to always duel and do battle, maybe even our whole lives as we try to reconcile that what we want and what is best for us in light of God holding every circumstance, is something that can be a bitter pill to swallow, but nevertheless this track is a great encouragement of how God is faithful, against the odds of life and against what we can perceive in this world to be slightly true, even if God says what we ought to believe is Him and not the world around us. Even I AM THEY’s duet with powerful singer-songwriter Matthew West is a great bright spot the album, a song that speaks about the freedom we have found in Christ, and what we have really found when God comes and invades every corner of our lives- a new name, good grace, a second chance, healing, forgiveness.

But…other than these four songs on this 10-track album, the album feels a little bit of a blur. Yes, I said it. When I heard it a few times over, I realised this one thing- the songs ‘Delivered’, ‘Promises’, ‘Found My Freedom’ and ‘Faithful God’ were certainly memorable. The others…not as much as I thought. Not to discount from the passion from the band- and when I heard these songs individually, I can attest that these songs are objectively catchy and meaningful- ‘The Well’ brings it back to the organic-acoustic a la Rend Collective musical atmosphere as the band encourages us all to drink from the well (a topic initially unpacked to us from Casting Crowns in their 2011 track ‘The Well’), while ‘Lift My Eyes’ encourages us to lift our eyes to heaven, remembering that we are loved beyond comprehension and that our help comes from God, far more than help from earthly sources. Even ‘Keep Coming Back’, the album ender, strips down the instrumentation to present a track that can either be seen as a union between two people, with the song sung and possibly a wedding day as each person commits and devotes their love to the other, or the song can be seen as a love song from us to God. Regardless of the intent and how the song is seen, the track itself is a unique way of delivering an I AM THEY song, and musically (with acoustics and strings), something they haven’t done as much of, before.

But sometimes objective catchy tracks don’t necessarily translate into songs that are memorable after a few listens, and this album, isn’t as groundbreaking as I thought this album was going to be, and this album wasn’t as enjoyable as I thought it was going to be, when compared to their 2018 album Trial and Triumph. Nevertheless, this album for a once listen is good, not great or excellent, but good. But for replay value…let me just say, ‘ask me in a year’ and then I’d probably give a straighter answer than I’m about to now. Because if I listen to the album 3 times over, and the only songs that actually stand out are the 4 aforementioned songs earlier on in the previous paragraph, then maybe the album isn’t connecting to me as much as I thought it could’ve. Nevertheless, someone may listen to this album and be deeply affected, and that’s ok. But for me, this album is certainly midde-of-the-road, and not an album I’d play of my own accord straight through for a while, unforturnately. The songs are ok, but nothing to make an album stand out amongst others in the particular year (or even across the artist’s discography too). Though I know that these men and women have tried their earnest and hardest, the result of this 10-track album, leaves the listener with wanting a few more songs to bring in the listener and capture them, because for me, these lyrics and themes have been recorded and tried in albums gone before. Artists like Casting Crowns, Rend Collective, All Sons and Daughters and Crowder have all given to us songs that have been more impactful and catchy than these songs here on this album, and a lot of the themes here on Faithful God are re-hashed from these artists as well. Nevertheless, this is an album for any I AM THEY enthusiast…but that’s about it.

You probably won’t really miss this album, even if you are a CCM fan- yes, songs like ‘Faithful God’, ‘Delivered’ and ‘Found My Freedom’ are good enough to cherry-pick on Spotify. But maybe, just maybe, if you’re more brave than me and want to listen to the whole album to see for yourself,  you can, but other than that, just listen to individual songs on spotify and see which ones you want to listen to again, or not. The band have tried in this album, we can’t deny them that. But the result for me wasn’t as intended. I may develop a new-found fondness to this album in the future. But from where it stands now, Faithful God is an album that is certainly feel-good, but isn’t one to play on repeat again and again and again, unless you are wanting to seek out I AM THEY for yourself. This is an album that ticks all the right boxes from an objective standpoint; but is still an album that doesn’t connect as much as previous albums from the band. And maybe that’s ok. I AM THEY’s album is such that can and should be listened to once in order for people to make their own opinion, and maybe just maybe, people can enjoy this album in a much greater sense than maybe I ever could.

3 songs to listen to: Faithful God, Found My Freedom, Delivered