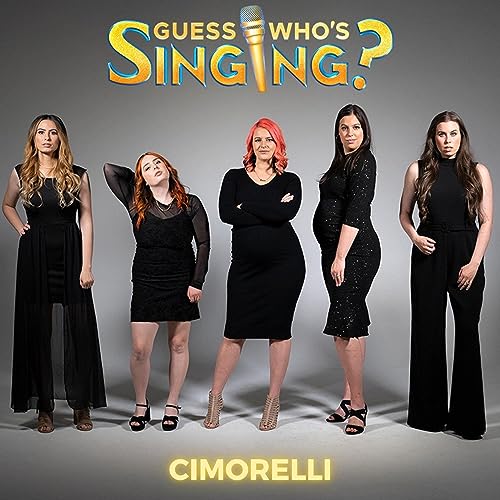 Cimorelli, oh Cimorelli… is there anything we’ve said about this band that needs to be said again? The six sisters Christina, Katherine, Lisa, Amy, Lauren and Dani Cimorelli, from El Dorado Hills, California (well… 5, because Dani left the band last year!)? If you’re an avid reader of our site, then you’ve probably read every post about the six sisters… and you might be thinking that a review like this- ‘yet another review of Cimorelli!’- can seem like overkill. And yes, you may be right. From the outside perspective, it could seem like we’re so intensely following the band that it’s creepy… however let me just say that because the six sisters have played a massive part in both of us leaping out and investigating mainstream music, and hence enjoying tracks we’ve never hear in a million years…well it stands to reason that we’d always have a place for Cimorelli in our hearts! You may think that’s weird, but that’s the way it is, no need for any further reasons.

I’m not going to dive into the girls’ history nor their discography. You can peruse our site to read our reviews on Alive, Sad Girls’ Club, I Love You Or Whatever, Here’s To Us and Christmas Lights; and you can also check them out on Wikipedia. Jon’s also blogged about Cimorelli as being one of the most influential artists of all time; while I did briefly speak about season 1 of their podcast here (which is on YouTube in full, as opposed to subsequent seasons being split on YouTube and Patreon!). There is so much you can read about the group, about these young women who have influenced our musical tastes immensely and greatly… so can you all do that now before you read on?

Because now, Cimorelli have released something new. Well… they release something new virtually all the time, be it singles or EP’s or albums or covers or podcast episodes or music videos… but this… is something extremely different. Guess Who’s Singing: The Soundtrack EP features 5 songs sung by each of the 5 sisters. And before you object and go ‘well that’s kinda what they did with the back end of Sad Girls’ Club’, let me say that yes, the girls did have a turn of having a solo song each on Sad Girls Club… but this is different. Because this EP which dropped a few days ago, is attached to a YouTube TV series. A reality TV ‘show’ uploaded to the girls’ YouTube channel, and containing 5 10-minute episodes, the ‘Masked Singer-ish’ show revealed to us 5 songs sung by the sisters, and each song sung with the pitch altered higher or lower. Oh, and each song featured one sister singing and the other four lip-syncing. At the end of each episode, you could vote on their website and guess who was singing each song… and now that the songs have released in full on all digital platforms and on Spotify, I guess you’ll know who was singing what.

With songs like “Fix You” (Coldplay), “This Is Me” (The Greatest Showman), “Shallow” (Lady Gaga & Bradley Cooper) and originals “Before October’s Gone” and “I Am Enough” being featured on the 5 episodes, with each song being a special song for each of the sisters; I’d say that the EP on its own can be enjoyed to a certain extent. But as I’ve been perusing the YouTube comments of the videos, I’ve found that Cimorelli’s fans are, well they’re all intense and they all love the girls immensely. Probably even more than myself and Jon. When both of us were listening to the 5 songs with the pitch altered, we couldn’t guess who was singing. Yet when we read almost every YouTube comment, we found out that virtually everyone had an opinion on who the girl was who was singing each song, based on her pitch and how she sings the notes. I mean… technical stuff like that, which Jon and I aren’t that knowledgeable about- I mean how much of a fan of a band do you have to be to instantly know how many vocalists are singing, and who is singing what, even with the pitch altered? I know Jon and I aren’t that much of a fan of Cimorelli now (go figure!)… so let me say that this release will be fully enjoyed by those who are fanatical about Cimorelli. And that’s not me and that’s not Jon.

It’s the reason I’m not rating this EP 5/5. I’m rating it 4.5/5 (because I love the band and I’ll have a soft spot for Cimorelli always!), however I don’t go voting like crazy on shows like this. Shows like The Masked Singer don’t appeal to me at all (read my review of the 1st episode of the Australian version here!)- but you all may have different TV show tastes and appreciation for YouTube series like Guess Who’s Singing. So… without further ado, here are the videos of the Cimorelli performances and also the songs in full unaltered. And now that you’ve heard and seen the new show… are you a fan? Are you a bigger fan of Cimorelli than ever before? Or are you realising you’re a so-so fan but still a fan nonetheless? Regardless, this EP is quite unique and deserves one listen at least, don’t you reckon? And for anyone who doesn’t know who Cimorelli is, could it be through this review, I’ve recommended you all your new favourite artist? Maybe? Possibly? Anyway, well done Cimorelli, for this unique musical and TV watching experience; I can’t wait to hear what’s next for you guys? How about a best of album, with re-recordings (with Dani!), or perhaps another worship album like Alive?

3 songs to listen to: Fix You, Shallow, I Am Enough