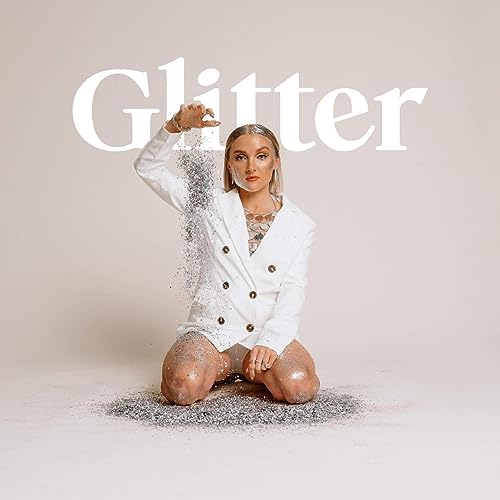 As a noun, ‘glitter’ is described as ‘a bright, shimmering reflective light’ as per google. As a verb, ‘glitter’ is described as ‘shine with a bright, shimmering reflective light’. For Carmen Justice though, one of the five lead singers of the now-disbanded CCM pop band 1GN; her new song “Glitter”, which I guess once again reintroduces us to the now-mainstream pop singer, reminds us that she is singing about something bigger than herself. Previously one of the founding members of 1 Girl Nation (later known as 1GN), Carmen Justice shocked the CCM world with the release of a debut solo single “Flaming Arrows” in early 2017. 2 EP’s followed in 2017 and 2018 (Against The Odds and Quarter Life Crisis), however with those two projects removed from the internet in any format (not on Apple Music, Amazon and Spotify!). And even the music videos that Carmen has released from songs from those aforementioned two projects… aren’t on the internet and on Youtube either! Thus it would seem that the year of 2020 was a rebirth of sorts for Carmen. I’m not really sure about the reason for the removal of both EP’s from Carmen, unless they’re being re-recorded for a future project- or perhaps Carmen doesn’t align with Christianity anymore? Maybe she felt uncomfortable keeping those releases online, or maybe it was a label contractual thing? Whatever the case may be, the 5 track EP of Different Life, which was originally only available on Soundstripe, is a collection of high-octane, encouraging, inspiring and hopeful melodies which reveal that Jesus still is working, and is continually moving us closer to Himself, even if these songs do not have an overt message of Jesus, and even in this apparent lyrical shift from Carmen. Even if Carmen isn’t a Christian anymore (shudder to think!), God can still use her music, as evident through songs from Different Life (read our review here!). “Glitter” follows this trend as well.

From like age 3, I have only ever loved music. I don’t ever remember wanting to do anything else, really. It’s just always been a part of who I am.”

I had to reevaluate and ask myself, ‘Why am I doing this? Why do I love music in the first place? And what do I want to say?’ I realized I’ve always been an artist, and I’ve always had things I want to say through my music.

I truly feel like I’m just being myself, and I don’t care to impress anyone. I’m not trying to fit in or do what’s cool. I’m finally making the music I’ve been waiting years to make, and it’s a really refreshing feeling to be in that place of complete freedom.

‘Glitter’ is all about empowering women to not let people put boxes around you. I think every human feels like there are limitations placed on them—whether that’s limitations we put on ourselves, or it’s things that people have spoken over us. I want ‘Glitter’ to make people feel like they can be themselves.

An energetic alternative rock track that’s completely out of left field musically, Carmen displays a different side to herself in this melody, as she eloquently and vibrantly conveys that she’s done conforming to what society expects of her and is instead running her own race, relaying that negative ‘…won’t kill my glow…’ because ‘…everywhere I go, gonna shine like glitter, gonna feel so high, going out tonight, all I do is shimmer, just throw confetti in the air, say I’m too happy I don’t care…’. Is Carmen deconstructing and this song is proof of that? Perhaps I’m reading too much into it, but either way, this track nonetheless celebrates uniqueness and individuality, and reminding us all that shining bright and letting the world see who we are as people- is a brilliant concept. As long as we are surrounded by friends and family- we can bloom into the people we were meant to be and the people God has intended for us to be as well!

When one chapter ends, another begins, and it seems that Carmen Justice’s new journey (for the second time?) is worth checking out. Time will tell if Against The Odds and Quarter Life Crisis will be re-released at some point or not (I really, really hope so!)… and while 1GN have ended for around a number of years now, it’s still a bittersweet moment whenever I hear solo music from each of the band members. All good things on this earth usually do come to an end, so let us not lament on what could have been with the band. Instead let us focus to the future, with Carmen’s new solo single “Glitter” and how she’s still leading people to Christ (covertly!) through her inspiring music, even fi she doesn’t know it. “Glitter” is just one aspect and facet of the next part of a new and exciting journey, so let’s all immerse ourselves in what Carmen has to offer musically, and remind ourselves that she’s one of today’s rising pop stars… with a hopeful and inspiring message to live life to the fullest!