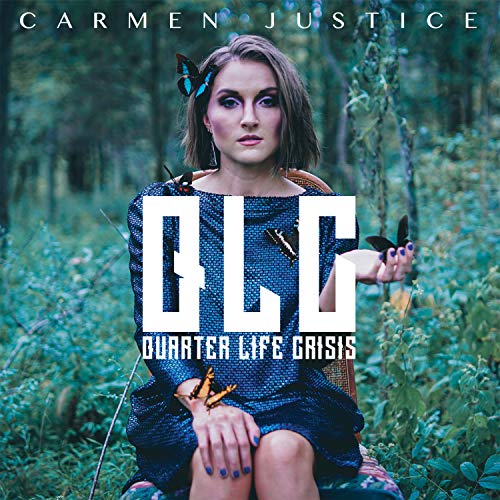 Is there such a thing called ‘quarter life crisis’? I know there’s such a thing called ‘mid-life crisis’, where a person who is middle-aged (probably between the ages of 40-60) starts to re-evaluate, practically everything they have ever known, realising that often, what they have thought, about their lives, about God, love, life and everything else in between, has been warped because of what they have been told previously, or because of some hurt they’ve experienced, and thus, what they have thought about everything and everyone stems from such pain they’ve experienced. That’s what I know a ‘mid-life’ crisis to be…so what should I make about this new Carmen Justice EP, titled Quarter Life Crisis? Though the title of this collection of songs, can seem a little ominous, the overall vibe and atmosphere of the EP as a whole is anything but. For Carmen Justice the artist, the journey from being in 1GN to being that of a solo artist has been a wild and eventful one, and while for me I am sad that such a promising and what it looked like, a very cohesive and well-rounded group, failed to make it after album #2 (UNITE), what has since resulted are the solo career of Carmen Justice, alongside Lindsey Adamec’s adventure and calling into a duo with her husband Austin, essentially creating them to become a worship duo as they minister out of their home church in Florida. Carmen Justice has had an exhilarating year or so since the disbanding of 1GN- songs like ‘Flaming Arrows’, ‘Red and Yellow, Black and White’, even the hauntingly soulful and emotive ‘The Other Side’ and more recently the fun-filled ‘Poco A Poco’ and the alternative ‘Cloud 9’; have all resonated with listeners around the world in either one way or another.

Now we see the culmination of the last year in these 6 songs (track 4 titled ‘Car Ride (Interlude)’ is only 41 seconds), as we realise that Carmen herself is one of the most vulnerable and passionate up-and-coming artists I’ve heard in quite some time. While for me there was a bit of a departure when comparing the musical style of her solo material compared to that of 1GN (there’s much more of an alternative and rock edge in these new songs, as opposed to the radio friendly pop present on both 1 Girl Nation and UNITE), the songs on Quarter Life Crisis are earnest and raw, hopeful and confronting, even fun-filled and joyous, all at once. This is an EP enjoyed and treasured if you love Carmen’s previous EP titled Against the Odds, or if you want to listen to indie-pop, not necessarily songs that are radio friendly (as much of 1GN’s material was), but rather, songs that may not necessarily get recognised in a critical acclaim way, but will still resonate and be impacting in the lives of people whom are hearing the EP.

Both ‘Poco A Poco’ and ‘Cloud 9’ have been released prior to this EP, and both songs form the backbone both lyrically and musically for this collection of 6 songs. Released initially at the end of May 2018, ‘Cloud 9’ employs a music backdrop of EDM, a musical genre that I myself have been taking more time than I’m used to, to enjoy and appreciate. Nevertheless, while musically this song may not necessarily be my first choice of music, the musical arrangement and how it was choreographed can’t be denied, that the production of the track is top notch. Produced by Swedish-American producer and DJ David Thulin, ‘Cloud 9’ tells of a persona who is going to rise to the top with their talents, knowing full well that they’ll be obstacles along the way and that they are a fighter, pushing through the negativity and reminding themselves that they are warriors and victorious, because of what has been done in our place to make us that. While the song itself isn’t necessarily very ‘Christian’ in nature, ‘Cloud 9’ does ask the questions, as we wonder whether we ourselves are trying to ‘get to the top’ and at what expense- be it at the expense of our family, job, career, relationships…you name it.

‘Poco A Poco’ on the other hand isn’t as indie-rock, as it is more of a Caribbean-style musical flair, something that Carmen hasn’t delved into on her previous 2017 EP! Thematically, the song is about trying to do things little by little rather than seeing things as one big thing and then getting overwhelmed in the process. With the literal translation of the title of the track being ‘little by little’, the song is reminding us all of our need to slow down in an age where busyness goes hand in hand with being fulfilled. Yet a song like ‘Poco A Poco’ is here to remind is to go slow for a little bit, as we know full well that change often occurs when we sit back and allow the Lord to work through the little moments where we are just undertaking things one at a time rather than just frantically trying to juggle 3 or 4 things at once. Well done Carmen for these two songs- both are great standouts on Quarter Life Crisis, and both encourage us all to rest every so often, and realign our focus, to take it off climbing a ladder and more on cultivating relationship wherever we are, trusting that if God wants us to rise the ranks, for us to wait until His timing and His way, so we don’t get disillusioned and disheartened when our way in our own strength is not enough!

‘…over the last year, I’ve felt like I’ve become so much more comfortable in my own skin; and realised that sometimes it takes hitting low points in life to remember who you are and what you were created to do. I had to remember the little girl inside who wants to dream big, and in order to do that I had to let all of my walls down and just be vulnerable with people. My favourite lyric is “This is not the end, this is where I begin” because so many times when life doesn’t go as planned, we feel like our whole world has ended, but truthfully so many times this is just the beginning of a new, and better, season. I hope that this song allows you to be vulnerable too; and find yourself again. Get caught up in the magic of dreaming and being comfortable in your own skin…’ With the above quote being Carmen’s thoughts behind the song ‘Lose Myself to Find Myself’; we see a song that is equally as emotive and poignant as both ‘Cloud 9’ and ‘Poco A Poco’, and sure to be a hit amongst listeners as the months continue to roll on. The message of the song is simple yet equally profound and needed in a society like this- sometimes we have to take a step back and not focus on ourselves, but rather, really delve into the aspect of relearning and rediscovering who we are as people and what it really means to follow the teachings of Jesus Christ- and how our lives ought to change when we really believe that Christ came for our freedom. To lose yourself is to lose control, to realise that the more we know, the more we really don’t…and that’s ok. Finding ourselves is when we search deep inside, and understand that often, it isn’t what we really know that will get us farther in life, but rather, it is when Christ comes and invades our space, that we can find ourselves in Him, all the while, losing our own self-centred lives in the process. Well done Carmen for this particular song, one of my favourites on Quarter Life Crisis.

Carmen also unveils to us two very distinct songs in ‘Edges’ and ‘Spotlight’. The former, ‘Edges’, is a Latin inspired track about travelling along the edges, the boundaries in life where often, we are able to understand that once we cross the line from rules and structure to grace and love abounding unconditionally, we can rest assured that our influence and reach will impact far greater than we can ever imagine; while ‘Spotlight’ allows Carmen to duet with FF5 (formally Family Force 5), and unveil the theme of unity and shining the light on us so that we can make a difference where we are, not that there is pressure on us to do so, but rather, the light on us as a spotlight should spur us on to influence and impact as many people as we can in this crazy moment called life!

Carmen has come a long way from her 1GN days. While it is saddening to see the band no more, we are told that they split amicably, and that they are still best of friends. Nevertheless, here’s hoping that all these members have successful careers in the future. As for Carmen, with the release of Quarter Life Crisis so shortly after Against The Odds, we are witnessing that though a quick turnaround; this EP has been the birthing spot of various songs that are certain to be anthems of many as the months usher along, myself included in the ‘many’. Full of passion and poignancy, EDM, pop and moments of anthems, as Carmen presents one of this year’s most unique releases of 2018 thus far; Carmen’s shift musically outside the box of CCM is actually a good thing- and yet, while some listeners may start to shy away from her style at the moment; Carmen and her music still have a purpose here in this musical industry, and Quarter Life Crisis and its structural cohesiveness is evidence of this. Kudos to Carmen for stylistically shifting out of the box on the EP, here’s hoping others think so as this EP continues to impact and influence in the upcoming months to come!

3 songs to listen to: Lose Myself to Find Myself, Edges, Poco A Poco