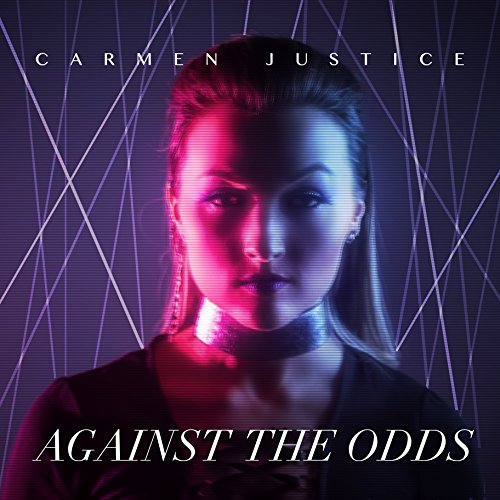 ‘…over the last year, I’ve learned more than I ever have– about myself, about God, about life…and these songs are the result of my learning. I poured my heart into these songs and hope that everybody who listens will feel empowered to chase their dreams and know that they aren’t alone in their struggles. With the horrible tragedies taking place in the world today, and turmoil within our own lives, fear is the natural immediate response. But LOVE Is always greater than fear. From songs about my faith, like ‘Ambassador in Chains’, to songs about love, like ‘Vow to You’, I hope listeners feel like they know my story better, and more importantly, know God better…’ 1GN, quite possibly one of the most promising rising all-girl CCM groups we’ve heard since ZOEgirl and BarlowGirl; shockingly decided to part ways late 2016/early 2017, and it was cemented in stone with the release in January 2017 of Carmen Justice’s new solo song ‘Flaming Arrows’. The band 1GN was no more, sad to say, because I reckon their debut album 1 Girl Nation and their sophomore album UNITE are some of my favourite albums I’ve heard in 2013 and 2016 respectively. Nevertheless, with the death of one thing comes the birth of something else- namely, the solo career of Carmen. Nothing like anything Carmen has released with 1GN, Carmen’s first single ‘Flaming Arrows’ showcased much more of Carmen’s rock/EDM side as opposed to the pop sound that 1GN brought to the table. Something unique and different, ‘Flaming Arrows’ showed us a side of Carmen we as Christian music fans probably haven’t seen much of before, as the song was an anthem for many, directed to our insecurities and fears, as Carmen made the message clear that they won’t win because of Jesus on our side. ‘Red & Yellow, Black & White’ followed, a song that showed us the need for love to come and unite us in a seemingly divided world. Now enter in Carmen’s first EP, Against the Odds that released a few days ago.

Two of the 7 songs on the EP are from singles released before, and both these songs are indeed standouts on this EP. ‘Flaming Arrows’ released in January 2017, and while musically I reckon the track isn’t the strongest on the EP (‘Red & Yellow, Black and White’ and ‘Against the Odds’ seem much more cohesive and musically inventive), the song nevertheless reminds us that in this world there is a spiritual battle between the angels and the demons, and that Jesus has won the battle and the war, therefore we do not have to be afraid. The flaming arrows are not from the Lord, but from the devil and all the schemes that has been put in place for us to abandon our trust and faith in the One who is worthy for us to put our faith in. But as this song suggests, it is a war, and Jesus has already won- so why are we afraid? Fear cannot and will not win anything as Jesus’ death and resurrection ensures our eternal salvation, if we choose to accept it. Heart-warming and powerful, moving and stirring; Carmen’s new song “Flaming Arrows” is sure to be a song that will be played on radio in months to come! And then there’s ‘Red & Yellow, Black & White’. As Carmen herself speaks about the theme of the song, ‘…there is so much happening in the world right now that could be solved in an instant if we would learn to just embrace each other with love. We are living in a time that it has become acceptable to tear each other apart and box people into categories based on the color of their skin. As Christians, we are called to love people regardless of race, religion, culture or nationality. Remember the old children’s song ‘Jesus Loves The Little Children?’ The line from that nursery rhyme says, ‘red and yellow black and white, they are precious in His sight’ and that triggered the concept of this song. I truly feel like with the hate, discrimination, wars, fighting, judgment, and anxiety different people groups are facing each and every day, LOVE seems to be the missing piece…’  The song, penned with both David Thulin and Jonathan Thulin and featuring GabeReal on backing vocals, the track is a reminder to many around the world not to evoke violence with violence, but to show love to people we meet. The Lord created and fashioned each of us, regardless of race or colour, thus, we are all formed and made beautiful in the Lord’s eyes. A powerful anthem of unity, as we as listeners are encouraged to take up the mantle of showing love to our neighbour, showing Jesus to others in how we live our lives; the song itself is an allusion to the children’s hymn once upon a time- that Jesus loves us all, whether or not we are red, yellow, black or white.

Throughout the rest of the EP, we are met with songs that are as poignant as they are fun, much needed in society at the moment as it also is much needed in the lives of whomever hears such tracks as these. Aside from ‘Flaming Arrows’ and ‘Red & Yellow, Black and White’, the title track ‘Against the Odds’ released prior to the EP release, in fact, a couple of weeks before I reckon. The song, standing at a tad under 3 minutes, is as anthemic as ever, as Carmen invites us all to go against the odds, to stand out and be different from what society expects of us. Driven by powerful drums and synths all the way through, we are given an anthem to declare and sing whenever we are put in difficult situations. As Carmen relates to us, ‘…I wrote ‘Against the Odds’ from a place where I felt so defeated by life and the music industry that I wanted to just give up on my music career altogether, but felt led to keep going. I wanted to write an anthem that would inspire anyone going through a difficult season to keep pushing through the frustration, confusion and doubt. “Galatians 6:9 says ‘So let’s not get tired of doing what is good. At just the right time we will reap a harvest of blessing if we don’t give up.’ I’ve learned that when we know we are following God’s will, we can walk the narrow road with confidence. In Romans 12:2, Paul says ‘Do not conform to the pattern of this world, but be transformed by the renewing of your mind. Then you will be able to test and approve what God’s will is—his good, pleasing, and perfect will.’ Whether you are the only kid in your class at school who is a Christian, a young adult feeling sexually-pressured by friends, or a married couple that feels like divorce might be the best option simply because the world tells them so, I pray that this song will encourage you to go against the odds…’ And so, there is nothing much more to say about this track than what Carmen said herself. And it is that track and that track alone as the first track on the EP that ought to bring listeners in who are interested in music that is way different from what you hear on K-Love or Air1.

‘Ambassador in Chains’ is a song written about Carmen’s faith and a song that we can all sing whenever we need to be reminded as to why we commit to the faith we do (and features a guest rap section with new artist Steven Malcolm), while ‘Vow to You’ is one of the most catchiest love songs I’ve heard, ever. Written for her husband, Carmen wrote a romantic song akin to something like ‘Fight for You’ (Grayson Reed) or ‘Worth Fighting For’ (Warren Barfield), and while I myself don’t have a spouse, yet, this song nevertheless hits home for me, and is a song that I hope I can live by whenever I do find someone whom I want to spend the rest of my days with. It is a song that is catchy but also emotive and hard-hitting. ‘These Four Walls’ presents a theme that is hardly talked about- moving out of our bubbles we surround ourselves in, for the same of us being comfortable at the expense of growth in both a physical and spiritual sense. Inside ‘these four walls’ can be safe, and it can be a place where we just interact with everyone that agrees with us, but this song calls us out of the safe into the uncomfortable, where the walls what we’ve built around our hearts is shattered and what comes out of breaking down the walls is much more respect and humility, of understanding and loving, compared to ever before. The EP then ends with ‘The Other Side’ (no, not the single ‘The Other Side’ from Colton Dixon), a track that presents a piano heavy presence as Carmen channels her inner Rebecca St. James to invite us into a personal story, of how she went through adversity and is now on the other side, gaining perspective and growing through such ordeals. It is never easy traveling through moments when we often question everything, yet this song alludes to a time in Carmen’s life when it was in fact that! Yet there is hope in the midst of pain, and this song tells us a redemptive story if ever there is one. This song as the closer is very much intentional I reckon, as we are given a song to declare when we’re in the darkness (which can be very often). A track that has become one of my favourite Carmen Justice songs, ever; this whole album is a must if you enjoy 1GN, and other similar artists like Rebecca St. James, Cimorelli or Charmaine.

‘…one thing I’ve learned is that everyone has imperfections. I think any industry has imperfections. And with the music industry, I think that it’s really easy to get lost in the business side of things, get lost in stuff that really isn’t the point, get lost in the financial side of things. One thing I think I’ve taken away from my experiences is to really ask the question “why am I doing this? What’s the point?” And if I’m not doing it to point people towards Jesus, then this is not something that God’s going to bless, ultimately. And I think with the music industry, I think it’s also about just embracing it. Embracing the fact that everyone’s going to have flaws. People are going to fail you, and situations will fail you, and even if you think something’s going to work out, it might not work out. When I have learned to embrace those things, it’s taken a lot of pressure off of my expectations and helped me enjoy why I’m doing it in the first place…’Carmen has come a long way from her 1GN days. While it is saddening to see the band no more, we are told that they split amicably, and that they are still best of friends. Nevertheless, here’s hoping that all these members have successful careers in the future. As for Carmen, with the release of Against the Odds, we’ve been given an EP full of heart and hope, EDM, pop and moments of anthems as Carmen presents one of this year’s most rounded EP’s, musically and stylistically. And while the EP just released, hearing this album is making me excited to hear whatever she delivers in the future…maybe a full-length album? Who knows. Still, well done Carmen for such a collection of songs, here’s hoping for much success in the future, as these songs minister to whomever the Lord believes needs to hear these songs!

3 songs to listen to: Red & Yellow, Black & White, The Other Side, Against the Odds